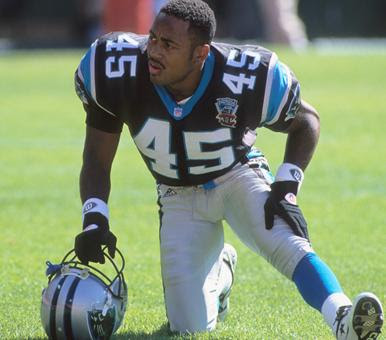 BC won't have a player drafted Thursday night. But with Wetzel, Clancy and Cleary all listed as late-rounders or undrafted free agents, BC may have a Mr. Irrelevant this year. It would not be the first time an Eagle ended up as the last player in the Draft. In 1995 the Carolina Panthers selected Michael Reed with the last overall pick.

Little is expected of Mr. Irrelevant, so Reed turning his tenure into two seasons was viewed as a success. He hardly played, but was able to extend his career after the NFL with two seasons of NFL Europe. After his playing days Reed got into coaching. He was on TOB's staff at NC State and recently joined Clemson.

Reed is making a name for himself now as a recruiter (Dabo praised his work on their 2013 class). I don't think his draft-day notoriety means anything to high schoolers, but his NFL background doesn't hurt. If any of our current eagles ever get selected last overall, I hope they use Reed as an example. He turned his one shot into a career.
Posted by ATL_eagle at 4/25/2013

so we can poach an alum from a conference rival who is one of their top recruiters? what are we waiting for? bring this guy back to BC!

Nice posting. I found it interesting. Good for Michael Reed. Isn't that what a BC education is all about? It's to create ripples in the pond of life.