Takeaways from Addazio's day at ESPN 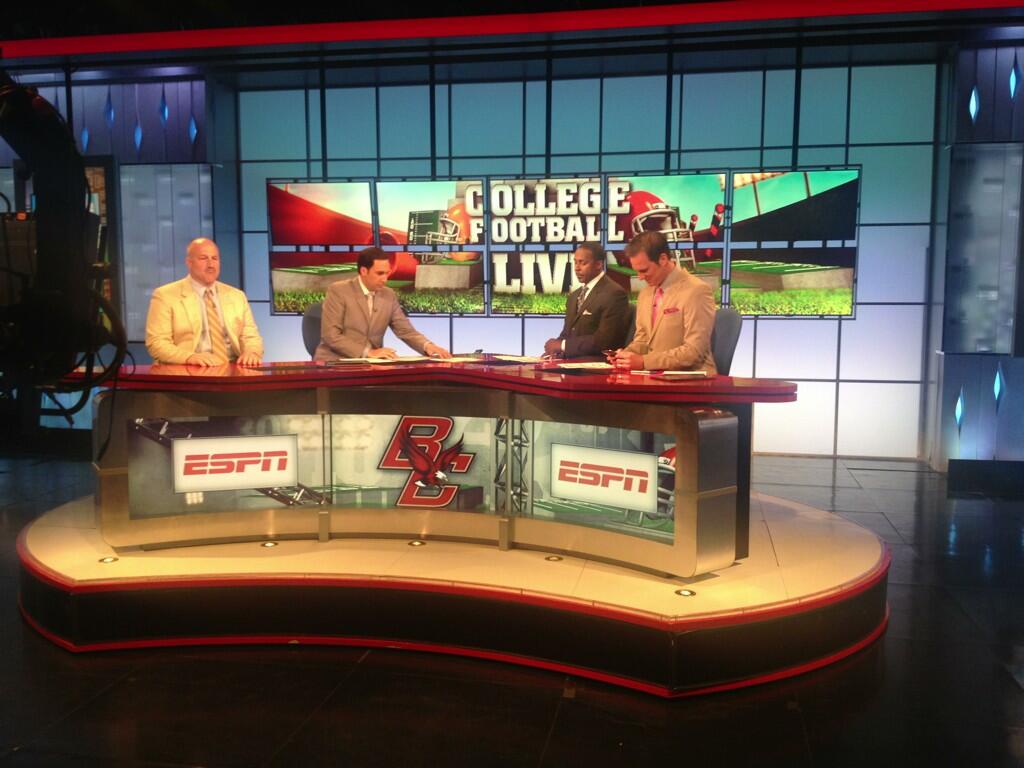 While many coaches have spent time at ESPN, I cannot think of another who got so much airtime in one day. I also cannot recall any BC figure at any time getting that much attention from the worldwide leader in sports. Regardless of the Tebow nonsense, Addazio's day at ESPN has to be viewed as a huge success. Here are my thoughts and news of the day.

-- The best moments of the day were his stint on College Football Live and his chat on ESPN Nation. In both forums Addazio was able to focus on BC. He reiterated many of the things we know like his focus on recruiting and his willingness to shape the offense to his talent. In the chat he also mentioned preliminary plans for a new practice facility and that he is taking names off of the jerseys.

-- I cannot recall a BC coach being so engaged with the media. I don't think Addazio is a great quote or has natural TV charm, but he has the right energy and attitude. He wasn't glib or boring or standoffish like some of our past coaches. He was himself. You can see how that same passionate and straight forward personality is paying off on the recruiting trail.

-- Addazio really likes Chase Rettig. I had heard this before through the grapevine, but Addazio was pretty effusive in his praise for our Senior QB. I know Addazio wants to run, but given our lack of depth at running back and talent in the passing game, I think we will throw a lot this season.

-- Addazio needs to do as much as possible to win over fans and media now. I think we are in for a major rebuild after this season (once Amidon, KPL, Rettig, etc graduate). Addazio makes a good case for his vision and BC's direction in these settings. The booster meetings have all been positive too. Load up on the good will tour now while he still has a clean slate.
Posted by ATL_eagle at 4/30/2013

Email ThisBlogThis!Share to TwitterShare to FacebookShare to Pinterest
Labels: BC and ESPN, BC marketing, Did you know Addazio once coached Tebow, Media Criticism, Steve Addazio

Too bad he's taking the names off the jerseys. The slanted numberals are almost unreadable and the names help alot, even with the small font they went to a couple of years ago. I think having the names on the jerseys helps the average fan, who may have heard of guys but hasn't memorized the numerical roster, better identify with the team.

I agree. I think removing the names is a shallow PR thing ("it's all about team") and a costly marketing mistake. We root for individual players as much as for teams. A few of the "skill players" like Rettig, Williams, KPL will be recognizable without the names, but few others.

Other than that, there's nothing not to love so far.

Knucklehead said...
This comment has been removed by the author.
3:43 PM

Any concern with what the coaching staff decides to do with names and numbers is a shallow thing.

The schedule this year is brutal. Will only get more strenuous with Pitt and Syracuse - ND for BB. The school needs to lower its admission standards in a few cases(1 for basketball annually and 3 for football annually) to allow us to be competitive in the restrucutred conference. That means investing in an additional coach or two to ensure the proper behavior of our players. I would hire a running coach, when the players get out of line they are sent running around the res. The old Tom Coughlin rules watered down

So, ND, Stanford, Duke all lower standards to achieve excellence? I wonder if they know that.

In order to put his stamp on the program, Addazio should have new uniforms. Maybe, that will be the goal for year two when he can put his logo on the squad with his recruits. Cincinnati went to a Bengal helmet. Currently, they are playing like "parakeets". There should be a way to emphasize the Eagle. They should also have a maroon helmet on certain occasions. Both the red stripe and the "church" stripe are hokie and unacceptable. Coughlin brought in the NYG stripe. I just would like to see it go. There must be some creative people at BC who could design a statement helmet.

Your point is taken, but ND does allow academically inelibigle players. This was rumored to be a condition of Kelley's accepting the job. No ND coach since Lou Holtz was allowed this exemption.

I am not saying break ncaa rules. I am saying stretch the John Mahoney rules by accepting players like Willie Green or Chuckie Dukes. Accept a couple players a year who are not academically inclined but not criminals either. Addazio should have to prove that he can keep players in check before the standards are bent