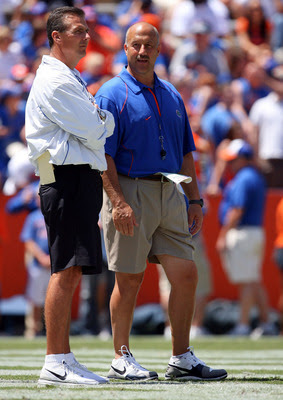 A Florida writer who was embedded with the Gators during Urban Meyer's run in Gainesville is now coming to his defense. The post is long and touches on many of the criticisms lobbed at Meyer, but the reason for the defense starts and ends with Aaron Hernandez. What I find interesting is that the writer is now saying Meyer was against recruiting Hernandez and only did so after an assistant persuaded him.

This is what I learned about how Hernandez got to Florida. He was recruited by an assistant coach from Connecticut, who knew of his checkered past.


Meyer balked at recruiting him. Partly because one of his assistant coaches was so passionate about signing Hernandez and partly because he became convinced “the mission” could change him, Meyer recapitulated.


The writer, Buddy Martin, knows that Steve Addazio was the "assistant coach from Connecticut." So would most of the readers and college football fans. You can even look at Hernandez's recruiting profile to see that Addazio was his recruiter. Yet he doesn't name him. Why? Because he knows it is not fair to blame Addazio for Hernandez. But Meyer still wants to shield himself and look innocent. That's been his modus operandi for a long time...even if he points the blame at his loyal and long-time assistant. Nothing is ever Urban Meyer's fault and god forbid he doesn't control every aspect of his image.

I can't speak to how things were run in Florida, but I don't blame Steve Addazio. I also don't blame Addazio  (or even Meyer) for Hernandez's murdering someone now. Hernandez is an adult acting on his own. Do we blame Kraft or Belichick? No one could have predicted things would end this way.

Addazio recruited Hernandez because he was in his territory and he was a great player. BC recruited him too but he didn't give us the time of day (and it was our TOB-Jags transition class).

I don't know if Addazio cares about what Meyer's defenders are doing, but throwing him under the bus even if it is by geography (Connecticut assistant) rather than name is a cowardly move. I hope Martin and/or Meyer apologize to Addazio.
Posted by ATL_eagle at 7/14/2013

I think this is a somewhat cynical view of the article. I believe it is well possible that the writer is motivated -- after an extended period of up-close exposure to Meyer -- to at least partially defend Urban (while UF is far from a clean program with the well understood period with 30 low-lifes, to point the blame at Meyer goes a bit far).

And to not mention Addazio seems to me to be a way of attempting to NOT accommodate transfering the blame to Daz.

I guess I am cynical. Why even say it was an assistant coach who pushed for Hernandez against Meyer's wishes? Meyer had the final say.

BurkieInBoston said...
This comment has been removed by the author.
5:07 PM

Did the article mention that there was another key Gators Assistant from Connecticut who was as much (or more) involved in recruiting AH to Florida? ...

Meyer lowered the recruiting standards at Florida - hence Hernandez could be recruited there.

I don't think they were very high standards anyway, but under Meyer they were ridiculous.

Without Meyer, Hernandez goes to UCONN. Was Daz involved? Yes, but Meyer set the Tone at the Top.

I should be interesting to hear how BC is different from UF from Addazio - Leaps and bounds, I'm sure.

Addazio was the main recruiter for Hernandez. That is not in doubt. That is also not a problem. BC recruited him too. My issue was with Meyer's buddy looking to shift blame elsewhere.

Is Addazio also to blame for Hernandez failing multiple drug tests during his UF years and Meyer doing nothing about it?

Meyer is a douche and everyone knows it.

If he wants to be a real leader, he should express his concern for his former player, take a portion of responsibility, then say how this will shape how he will work with his current players. Otherwise, Meyer and his proxy should shut up.

The article is a load of crap.

To quote Parcells, you are what your record says you are. The record is pretty clear regarding the type of program Meyer runs.

Also ever since this news broke, it's been clear that whatever comes out of Hernandez's mouth to the media is 110% full of $hit so forgive me if I don't believe him regarding his relationship with Meyer.

Soif you arean assistant for Meyerunderstand he will throw you under the nearest bus to protect himself...classy guy

Thanks for the best blog.it was very useful for me.keep sharing such ideas in the future as well. Thanks for giving me the useful information. I think I need it!
rollercoaster creator
super adventure pals
madness project nexus hacked
kizi games
kizi 4
kizi4
mickey mouse game
friv4

I think there are many people like and visit it regularly, including me.I actually appreciate your own position and I will be sure to come back here.
launcher l download launcher l launcher apk l launcher app l launcherapp