Basketball practice officially begins today. This is exciting news for what should be an exciting season. Much of the excitement will come from BC's overly challenging schedule. We've discussed the out of conference slate before, but last week in an ESPN article, Donahue explained why he gave his still young team such a challenge.


Donahue believes some of the beefed-up conferences will be so brutal that a strong nonconference performance might be enough to boost a team with a so-so conference record into the postseason.
"When a 9-7 Boise State from the Mountain West makes the NCAA tournament and an 11-7 Virginia from the ACC doesn't, I think in my position, I gotta wake up," Donahue said. "And that's what we did. We analyzed really our schedule. ... I don't want to be 12-1 [in the nonconference] with an RPI in triple digits and then have to win 13 games in the ACC."
And then there's the entertainment factor, which can't be dismissed.
"The other reason for me is I want to attract as many teams as we can that will excite our fan base," the BC coach said.


I keep saying BC will be a bubble team this year. That is probably not accurate. We will either be in or out based on our record. There won't be any ambiguity because our Strength of Schedule and RPI should be very high.

I don't know if Donahue's gamble will work. I assume it will because if he succeeds, he will have done everything the selection committee asks. And if he fills some more seats at Conte, we are better for it. 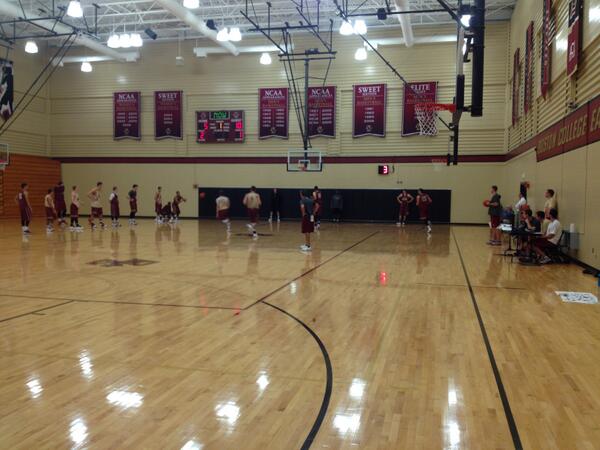 Donahue certainly isn't afraid to put this team under a microscope for the selection committee. I think this is a great strategy for BC because we're kidding ourselves if we think that a selection committee is going to give our program any benefit of the doubt. The only way BC will get into the tournament is if it affirmatively proves it is one of the best 64 teams in the country.

I think it is great and I'm especially looking forward to VCU. The roadie at Harvard should be fun too, mainly because games at Lavietes are more fun than Conte. And also because BC and Harvard both should be very good this year.

A bit off-topic (more like adjacent-topic, I guess) but any news on Clifford's knees? Will he be healthy?

After one month of the football season how would the conferences rank? The Pac 12 would seem to be the best. Oregon and Stanford are as strong as any teams in the land. UCLA, Washington and ASU look good too. Tied for second would be the ACC and SEC. Louisville is in the ACC in 9 months. That would put three ACC squads in the top 10. VT and GT may be solid teams. The SEC has six good teams but LSU, FLA. and Georgia have lost their most recent matchups vs. the ACC. Tied for fourth would be the Big 10 and the Big 12.Michigan and Michigan St. look ordinary. Nebraska, Penn. St. and Wisconsin all have losses. Texas, Okla. ST. and TCU have all struggled. OKLA. beat WVU in a close contest at home and WVU lost by 37 at Maryland. 2. Interesting to see Oklahoma beat ND for the first time in 57 years. What was the name of that coach at BC that beat ND six years in a row? ND is really at a crossroads in their season. They play ASU Saturday in a toss up game. A defeat would be their third. A likely loss to Stanford in the last game. ND could be a 7 and 5 team heading to the Champs bowl instead of a title contender. What happened to the great defense that carried them last year? Two first round picks anchor the D Line. Did Diaco forget how to coach? In the four games they played excluding non top 100 Temple, they are surrendering almost 30 a game. BC appears to be heading in the right direction ND the wrong.3. No one does it better than TOB when it comes to QB development. Three of his acolytes ( Wilson, Ryan and Glennon) started NFL games this weekend. 4. The formula to beat Army was on display in the GT vs. VT game. VT sent linebackers and safeties into the GT backfield on every play. Attack and disrupt the option. 8 or 9 guys in the box.

no Army game this weekend

"
The Defense Department has cancelled intercollegiate sports at its three service academies during the government shutdown, according to an announcement Tuesday.

The Naval Academy, the Air Force Academy and the U.S. Military Academy are suspending their football and most other games, with at least a few exceptions.

ATL,
There is no fear of losing. Which says his job is secure for the next 3 years. Contrary to the comments you have made.

M34b, you should have read the entire article. Also, go to the BC website. Look before you leap. The headline said "could be cancelled" not has been cancelled.

CLARIFICATION: An earlier version of this article said the football game had been canceled. A final decision has not been made