A Michigan Man on Tommy Amaker 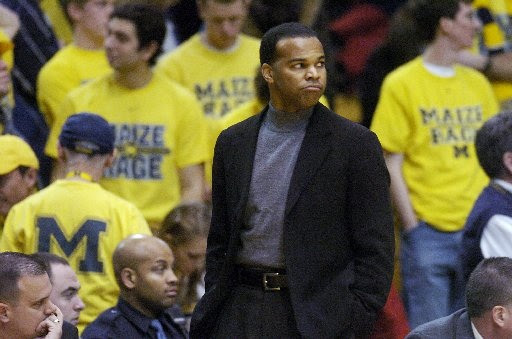 The biggest issue I have with Tommy Amaker was his mediocre tenure at Michigan. As an outsider, it always seemed like he underachieved. But to get a more informed opinion on his time in Ann Arbor, I asked blogging pioneer Brian Cook of MgoBlog his thoughts on Amaker. Brian's two cents follow:

"Amaker walked into a disaster area at Michigan and did make things better pretty much from the drop. Brian Ellerbe had filled the roster with ne'er-do-wells and many of them left either on Amaker's hiring or once they discovered that Amaker had a problem with them, say, jacking contested threes from halfcourt on the regular.

Amaker came in, nailed down a top-50 point guard from Texas named Daniel Horton, and made Michigan generally competitive except for one year where his team was destroyed by injury.

Unfortunately, that's where the improvement stopped. Michigan was perpetually on the bubble under Amaker and never got over the hump. His teams continually turned the ball over and he never got over .500 in the Big Ten except for one year where Michigan started out 0-6 with losses to Central and Western Michigan. His recruiting was wildly erratic; he was capable of getting kids to Michigan that few others would have managed but he also made crazy early offers to guys who had no business at a D-I school--a couple in fact transferred to D-II Saginaw Valley State, where they were bench players. Beilein inherited a mess comparable to the one Amaker did, without NCAA sanctions hanging over the program.

It does seem that Amaker's figured a few things out at Harvard he never did at Michigan. His time at M was seven years ago, as hard as that is to believe. He's built the Crimson into the most impressive Ivy program in 50 years. You would get an instant and real recruiting bump and he would get BC to a level where they're at least on the bubble. It's a defensible hire."
Posted by ATL_eagle at 3/22/2014

Amaker was 31 when he started his first head coaching job (at Seton Hall). now he's 48 and has been a head coach for 17 seasons. while his early coaching stints are informative, its safe to assume he's a different coach now than he was in the late 90s at seton hall or a decade ago at Michigan.

he's certainly an interesting choice, with pros and cons. the biggest worry for me is the fact that we just hired a guy who built a winner in the Ivy and he didn't work out. that said, i think its pretty clear Amaker can recruit.

the Globe keeps floating it, probably because its a good local story for them. i've gotta imagine Bates has a longer list.

His turtleneck with a sports coat look is deplorable. We can do better than this guy.

This would be a huge drop off from the mpeccably dressed "Coach Handsome". Skinner did not wear the same suit twice in a season, and was the spokesperson for Eastern Clothing of Watertown, a prominent men's clothing store near Boston College.

So Al was sharply dressed. He also wasn't half bad at coaching.

We'd be lucky to get Ammaker. I don't think he's all that. But I do think we have a below average ACC program and will pay as such. Marquette and Wake are heads and shoulders above our little program right now. To stay that about Wake is really sad, but true.

I hate to say it; but I must agree that BC is not going to pony up $2plus million per year for a basketball coach. They can afford it; but the will is not there.


This means that BC is going to go bargain-hunting down in the second, third, and fourth tiers of available coaches.

I hope I am wrong; but the longer we dither, the more we get priced out of competition.

I thought Al looked good. He made it work. Better than George Steinbrenner anyway

"but the longer we dither, the more we get priced out of competition."

Wisdom? How do you know that we are dithering? You have no idea what BB is doing. None. I love the word dithering. It is a favorite of Sarah Palin's who also is one of our wiser citizens.

I'd say the debacle over Donahue's firing was classic dithering. I'm starting to think that BC had better pull the trigger pretty darn quick as our choices are being taken off the board.

Perhaps Mr. Bates can see Cambridge from his porch?

Don't know if gran frischilla is a reliable source but he tweeted BC is going hard after amaker, while also promising facilities upgrades comparable to the ones he got at Michigan.

Any possible truth to that?

I highly doubt Bates is sharing things with Fran Frashilla.

"I'd say the debacle over Donahue's firing was classic dithering. I'm starting to think that BC had better pull the trigger pretty darn quick as our choices are being taken off the board."
SO now firing Donahue was a "debacle"? What university had the temerity to grant you a diploma? It certainly could not have been BC. I love it when you say "our choices" as if BB would even give you a penny for your thoughts. You have no idea about BB's thinking on firing SD and none about HIS choices on a new coach. NONE. You claim to have graduated from some school many, many years ago so maybe its dementia that is the prole. If so, we will be much more charitable.

Somebody got up on the wrong side of the bed this morning.

Donahue should been fired the next morning after the last basketball game was lost. The "dithering" refers to Bates' failure to do so.

My degrees are from Boston College and BCLS. Sorry, diplomas are from high schools. I've got one of those as well from Don Bosco Prep...well before they became the national powerhouse. It was so long ago, they were a boarding school.

I do confess to referring to BC as "our". I am a fan and not as objective as I should be when it comes to alma mater.

As to what Mr. Bates is thinking, I do wish his process, to the extent possible, could be a bit more transparent. Of course, it may be contradictory to wish it were also concluded quickly.

I suppose we have no reports from campus because the students are finishing up exams, papers, going on break, etc. It was easier to follow the Bill Flynn hiring process; i.e., we hung around Roberts Center and watched who came to visit Flynn's office--crude; but effective.

As for dementia...sorry; but I don't see the humor there. i assume from your earlier comments about "morality" or your version of it that you pray, etc., even if you can't forgive Bruce Pearl his barbecue. Pray you never have to deal with that issue and don't lose your perspective.

BTW expect to hear from '74...latest reports have Shaka talking to Marquette and Wake.