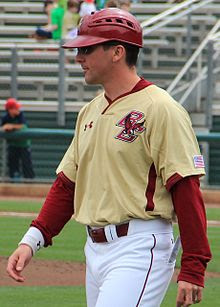 BC just finished another disappointing Baseball season and yet there doesn't seem to be much talk about the future of Head Coach Mike Gambino. After four seasons the team remains one of the worst in the ACC and failed to qualify for the ACC Tournament. While the showed signs of improvement this season and there is renewed hope about facilities, we have to continue to ask if we have the right staff in place. I am an outside observer so I asked Brian Foley from College Baseball Daily for his opinion. My questions and his answers follow.

1. BC looked better and was more competitive but still had a terrible record. Was the improvement real?

Foley: The improvement was far from real. They played several of the have-nots this year with NC State being a complete failure while they still ended up losing a series to old friend Mik Aoki’s Notre Dame squad which finished with a 9-21 record.

2. Who or what was the biggest surprise of the season and biggest disappointment?

Foley: The biggest surprise to me was the development of Chris Shaw into an upper echelon ACC player. He finished the year with a .329 average and a team high six homers which was the same amount that the rest of the team combined for. Shaw was a disaster as a freshman when he hit .165 with six homers and 19 RBI.

The biggest disappointment continues to be the pitching staff which had a 4.27 ERA which is high seeing as about half BC’s games are against weak northern competition in midweek play and on the Spring Trip.

3. Would you fire Gambino? If no, what are the expectations for next year. If yes, who are potential replacements?

Foley: Would I fire Gambino? I don’t know if the school cares enough to actually fire him. I was attending the America East Tournament this week when one of his former players in Anthony Italiano got a key double to lead the Seawolves to a victory. This was a kid that was not good enough to play at BC but has had a solid little career at the Long Island school.

My first phone call would be to Justin Blood at Hartford. He has made that program into a respectable team which plays hard throughout the game. There were trailing a game by nine runs but wouldn’t give up in the ninth inning when they ended up losing only by four. This is the toughness that is missing right now with the BC program.

My second phone call after Blood would be to Steve Owens at Bryant. He made the NCAA tournament last year for the Smithfield RI school and had a successful run at Lemoyne before heading to the Bulldogs. Lemoyne would be an absolute pain back in the day for schools and Bryant is becoming a new Lemoyne.
Posted by ATL_eagle at 5/24/2014

Gambino should have been fired last year after three disastrous and humiliating seasons. This was a waste of another season that should be laid at the doorstep of our Athletic Director (who apparently believed that a 21-69 ACC record over 3 years wasn't enough to merit dismissal). They really need to change the school's motto from Ever to Excel to A Nice Place to Work.

Obviously the AD needs to decide if being a laughingstock is appropriate for our baseball program.

What is your vision for Baseball, Mr. Bates? I like being laughed at, and therefore will keep the status quo.

Compete or drop the sport.

Folks ... let's get back to reality. With that facility as poor as it is, and BC competing in the ACC, do you really expect a "new" head coach to dramatically get this team to 30-35 wins on a semi-regular basis? The goal for BC baseball should be 30 wins and .500 win percentage in the ACC. I just don't think firing Gambino is your answer unless you have a really solid backup plan (which I highly doubt is the case).

So Keith - putting aside your goal of a 500 club, how bad does it have to get before you replace the manager? They went 10-20, 4-22 and 10-20 again in the ACC in his second, third and fourth years. Isn't that dramatically bad enough for you? If it should take more than that to get canned at BC, what does it take?

The facility was approved what 7 years ago?

This state is the best.

I'll believe it's being built, when I see it.

At the end of the day, nobody cares about BC Baseball. So why does it matter if Gambino comes back or not? Let him stay or don't let him stay - it does not move the needle for anyone.