Does BC need to publicly extend Addazio? 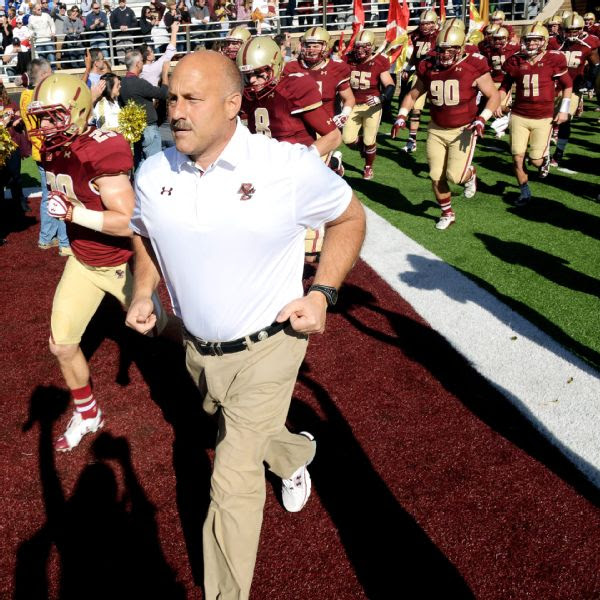 With big names like Mullen and Miles removing themselves from the Michigan search, it seems like the Wolverines are narrowing in on someone. The consensus is now Harbaugh or bust and guys like Schiano and Addazio are fall back/emergency candidates. I remain convinced that Addazio is not getting the job, regardless of his loyalty or happiness. But the coaching carousel and Addazio's success does raise a question: should BC publicly extend his contract?

Coaches are competitive. It is the nature of the job. Even for guys who don't need it, money becomes another way to keep score. Think of how many guys have requirements that they make $1 more than other coaches in their conference. But coaches are also like us. When things are going well, we want signs that we are appreciated. Signs that our boss respects what we've done. Two years into a tenure is a typical time to look at a college contract. Spaz got an extension after two years. Jags was in the midst of negotiating one when the showdown with Gene occurred. Rewarding Addazio now makes sense. It is an acknowledgement of two years of overachieving and a message to recruits and the staff that there is stability at BC.

But extending Addazio has a few drawbacks. BC is essentially negotiating against itself. Michigan -- even with heavy speculation -- remains a longshot. While we have healthy revenue for football, we still could use Addazio's potential raise towards infrastructure projects like the practice facility or continued Alumni renovations.

Brad Bates isn't coming to me for advice, but I think BC should give Addazio a small raise and a few more seasons on his contract. BC should wait until the smoke clears on Michigan and the bowl game and then make the announcement. The announcement would reaffirm BC stability to recruits and its future under its passionate coach.
Posted by ATL_eagle at 12/16/2014

Why would you utter those seven words?

(Spaz got an extension after two years)

He certainly should get an extension, as I have been saying for a while now. The problem is Bates. What happens if Michigan's plan A, Harbaugh, falls through? Plan B could envolve both Bates bad Daz. So the guy who has to advocate for Daz has a conflict of interest, not good. So we cross our fingers and hope these guys don't get sucked up into the Michigan situation. Michigan's problem is, try as they might, they won't get a better coach than the guy in Coliunbus, that includes Harbaugh.

Love what Daz has done, but he received a six-year contract. A quick eye-ball test at the link below indicates that 5-years is standard. He is now down to 4; not sure there is a huge need to rush into an extension just yet. Personally, I would love another season to add to the sample size.

The danger is that the nature of the money mad sport is turning BC into a training ground for higher level coaches just like Bowling Green. I think that "Hoib" makes a good point. Both may go to Michigan.

If you regularly follow ESPN college football website you will see that all the above average programs reward there coaches w/ new deals way ahead of expiration. They also include buyouts to protect the school. It's a classic risk reward scenario. If Daz laeves and is replaced w/ a dud, ala Spaz how much in lost revenue do you think that will there be verses what we give Daz in a new deal. do you think future TV contracts will be less or more? I think they will continue to go up. Based upon what Daz has done and where I think he can take us he's worth the risk.
Two programs I think we should parrot, due to their similarities to us are Ga. Tech, and TCU. They consistently reward their guys w/ new deals and have managed to keep them. The money is there, we should spend it where we get the most bang for the buck. If you don't agree w/ me and think that Daz is just ordinary you don't do it.
We also have no idea how the Michigan story will play out. It could already be too late to do anything w/ Daz, but if they sign people other than Daz and, or Bates. The first thing Bates should do is get to work on a new deal for Daz before next season.

Definitely see your point but just think that an extension after year 2 of 6 makes little sense opposed to waiting another year. And a 10-year extension won't keep Addazio around if a "factory" comes in tripling his salary. I just feel more comfortable waiting another season, personally.

On Bates, I really do not see him leaving for Michigan. If the current interim AD was allowed to fire Hokie and conduct a new search, why would Michigan then can him and bring in Bates now? Besides, just because Bates hired Addazio for Boston College I don't think that means Daz is Brad's top choice for Michigan. Different resources (much more money to allocate to a head coach) would open Bates up to so many more candidates.

Here's to hoping that both stick around though, and that we see continued success regardless of when an extension is offered.

Hoib, let me just say it: your idea is ridiculous.

"Plan B could involve both Bates and Daz"

No extention for Daz either and no raise. He still has 4 year of contract left. Maybe - or maybe not - after a great season next year something could be done. Gotta apply some sense here. Daz has no leverage and is not going anywhere ths year. Therefor no bump up. Plus, he is presently only a hair above mediocre. Right? BC is playing .500 ball and is not ranked, or even close to ranked. What big thing has Daz accomplished yet?

test: which of the following does not belong with the others

They want Harbaugh, but so do allot of other NFL teams. If they didn't want him they would have hired someone else by now. If they get Jim, he will tell them who he wants as AD. He is available only because of a well publicized rift w/ his G.M. He won't get himself into that situation again. In short Michigan will do anything to get him, but in the end still might not be able to land him. His wife loves the west coast and the Raiders are rumored to be interested in him.

The other 2 you mention have said they aren't candidates. I don't recall Daz or Bates saying that.

As usual you are full of sound and fury signifying nothing.

Give him more $ not time and put in a bigger buyout.

Your other points re: Bates et al are good, but what if your wrong? I don't think we should take chances w/ Daz. If nothing happens this year, rest assurred we will go through it again next year. Even if I'm wrong we are just apending some more of ESPN's money. There will be plenty more where that came from.

I like Daz a lot and I would be disappointed to see him go but I do not want to extend him at this juncture.

I'm not nearly impressed enough with the play calling and in game adjustments to warrant spending a boat load of money to keep him, only for him to tank in year 3, 4, or 6 or 7.

This team is a little different because he is playing a lot of young kids, but after winning with Golden's kids at Temple there was a notable dropoff. He also showed not to be a great OC and game manager at UF, so I think we have to exercise patience on this one.

If he gets a raise elsewhere, good for him. We can all be thankful for the excitement and resurgence he brought to the program. Hopefully he'll take Ryan Day with him and the new coach will continue on the right path.

That being said, I don't think 2 years is enough to over-pay. Let's see how he does with a full team of his kids, or at least 3/4 of his kids, and how they continue to grow in year 3, then maybe have this conversation.

Hoib, if you are going to quote Shakespeare, you need to get it right. The quote, as you probably know, really applies to you and your out-of-left-field idea about Brad and Steve to UM:

"a tale told by an idiot, full of sound and fury, Signifying nothing."

Miles and Mullen have been mentioned frequently as UM candidates, but both are out of the running now.

And you seriously think Daz is a back up plan if Harbaugh does not work out???

I didn't use quotes, and I have pretty good company in Faulkner. If u new Mullen and Myles were out of the running, why bring them up? You just love to waste people's time. BTW Daz's name is getting mentioned quite a bit in connection w/ Michigan so what's the difference between that and Myles and Mullen being mentioned?

oh Hoib!..... so thin-skinned for such a busy bee commenter

You, unlike everyone else on this blog are an insufferable p.i.a. Life is too short to waste on a clown like you. Good bye

Hoib, i just hope you mean it! Ha!!! We're going to miss you

As usual u r clueless. I meant reply to you. I love this blog, the only negative is u. I don't even think u went to BC. In the 40 years I've conversed w/ fellow Eagles, I never met one as surly as u.

I agree that Daz shouldn't be extended yet. However, I would be fine giving him a slight bump in pay, say 15% or so. True, he's not ranked and he's playing .500 ball. But he's also recruiting like there's no tomorrow, obtaining key 5th-year transfers, and was able to win this year when everyone was expecting a step back. Plus, the Pinstripe Bowl committee said that they were really impressed with Daz's sales pitch. In short, he has completely changed the culture of BC football for the better. That's worth something after the atrocious Spaz years.

Well said. If he's as good as I think he is we should get used to this. I'm not saying he's Nick Saban, but Saban gets a new deal every year. If Michigan signs Harbaugh for 8 per, I'm sure Bama will bump Nick to that level.