How is Hanlan's hot streak impacting his draft prospects? 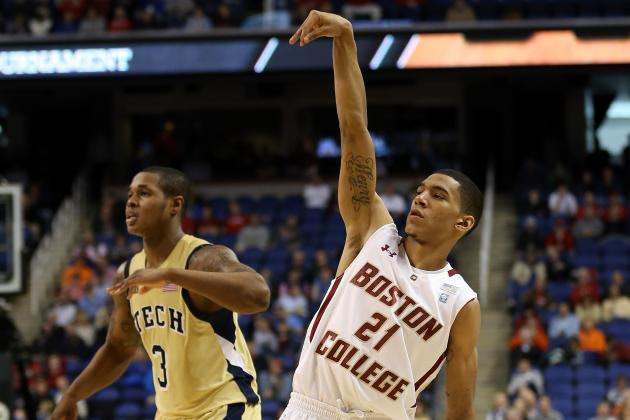 Olivier Hanlan tested the waters for the NBA Draft last year and wisely decided to return to BC. With his midseason slump it seemed like he would also spend his Senior season at the Heights. Now that he's on fire, many -- including me -- are speculating that he'll enter the Draft this spring. But it is far from a sure thing.

According to Draft Express, Hanlan is still not among the Top 100 Prospects for this Draft. Draft Express also slots him as just the 21st best Junior. (Draft Express updates their rankings daily.)

Now neither site is a guarantee nor do they address the needs that various NBA teams may have for a scoring combo guard. It is also likely that their rankings are lagging behind the growing consensus regarding Hanlan.

There is still plenty of basketball to play and Hanlan's final weeks will impact how NBA teams feel about him. For selfish reasons I don't want him to leave, but also think it is probably in his best interest. How high is he going shoot up the boards? Maybe he'll become a borderline 1st round prospect. If that is his status, he might as well return, get his degree and try to become a first-round lock.
Posted by ATL_eagle at 2/25/2015

There's no chance Olivier goes in the first round. He has been on a great one but he has a few major issues going for him... He's a good but not great shooter while the NBA is increasingly focused on having great shooters at positions 1-4. He's an average at best defender, likely too slow to guard NBA PGs and too small to guard NBA SGs. He's also a very old junior... He recently turned 22. That is ancient for a 1st rounder.

If he continues this push through the end of the season and tests well athletically he could be a 2nd rounder but I just don't see it. Selfishly I want to see him come back, but even so, I can't see him be a first rounder and likely a borderline 2nd rounder at best.

Totally unscientific but I think he's a first rounder. All my insight is BC related. I compare him to Troy and Reggie. The way he has played this year in league is every bit as good if not better than those 2. I think Reggie had a physical advantage but that's it. O has been surrounded by nothing and still has been sensational. Last year I was of completely the opposite opinion. The kid has really come on like gangbusters. I hope for his sake I'm right. He's really played his heart out under just awful circunstances. Next year will be just more of the same from our hoop team. I don't see how he can benefit from that. He should finish his degree in the off season in future years and BC should help him all they can in that endeavor.

Hoib--Hanlan has played well but Jackson had much better tools. He was a tall, fast PG with a good handle that could shoot just as well as Hanlan. Troy Bell was similar physically, but he had a much better shot than Hanlan (he also didn't do anything in the NBA).

Beauty is in the eye of the beholder. Troy got hurt. Glad your one of the few still paying attention.