There are no Patriots without a BC guy 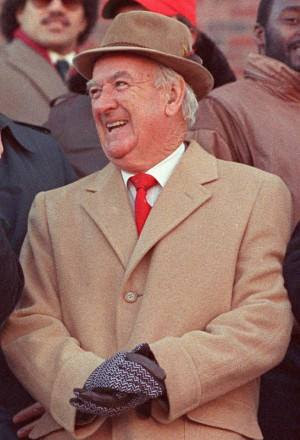 Before the dynasty and before they became the model NFL franchise, the Patriots were Billy Sullivan's baby. Sullivan was a character in every sense of the word and if the hadn't put together an ownership group for an AFL team, there would be no professional football in the Boston area today.

Sulivan graduated from BC in 1937 and then went on to a series of jobs that sound more like adventures. He worked PR for BC, Notre Dame and the Braves. He started the Jimmy Fund and had a variety of entrepreneurial projects. Unlike many of the other NFL owners, Sullivan wasn't rich, so there was always a robbing Peter to pay Paul aspect to the Pats. He moved the team around Boston until the stadium was built in Foxboro. He sued his partners in the '70s, lost a fortune on a Michael Jackson tour in the '80s and eventually sold the team and then won a suit against NFL in the '90s for the limitations they put on him during the sale.

If Sullivan hadn't lost his shirt, I don't know if he and his children ever would have built what Kraft did. But without Sullivan getting his taste of the business side of football at the Heights, there is no trophy case in Foxboro now.
Posted by ATL_eagle at 2/02/2015

All good points. Billy Sullivan was not in the same class as a businessman as Robert Kraft, but he sure had the business acumen to buy a professional football franchise, keep it afloat in turbulent times (something the random owners of the Celtics had just as much trouble doing) and in the final analysis maintained a valuable asset here in New England which allowed pro football to stay here. He took a lot of abuse publicly but he was always a BC guy and was good to BC when they wanted to use The stadium in Foxboro during the 80's. Billy was a character, an old fashioned guy who never ran the business like someone who had an MBA from Harvard. He could have used a few Harvard MBA types to crunch numbers and help him with business strategy and advise him to stay away from Michael Jackson. In the end, he was a guy from an earlier generation who used his BC connections and some brass balls to bring professional football to New England. He should not be remembered as a caricature of some stumblebum. Give the guy credit because for all his flaws, he stepped up to the plate when a lot of other tycoons were clipping their coupons.