No Crimmins, no big deal 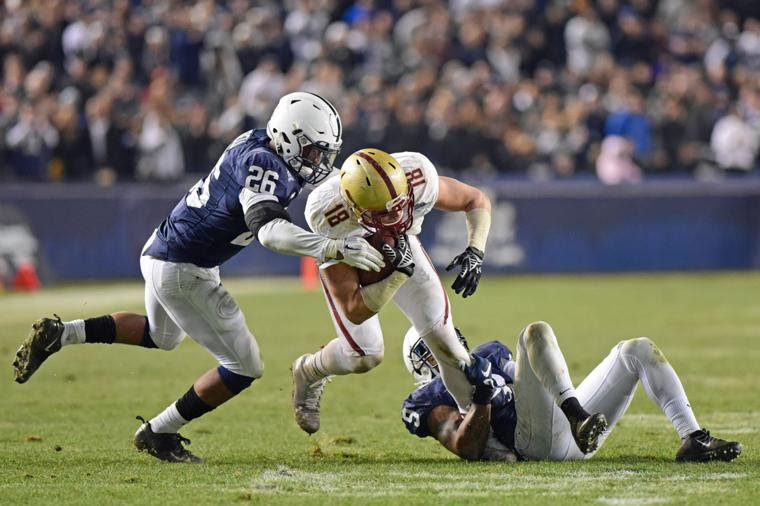 Wednesday, ACC Sports reported that Dan Crimmins was no longer on the team. No reason nor confirmation came from BC, however, Crimmins is not listed on the roster. It is the offseason and I know that Crimmins accounted for 18% of our receptions last year, but I think this won't really impact the season.

Crimmins served as a nice hybrid WR/TE and was a decent blocker, but in the whole scheme of things, he was replaceable. We will remain a run first attack and the running game is where the majority of our playermakers are. Crimmins would have been a "nice to have" guy and we could have used his experience, but I think our current roster can backfill his productivity. The only real benefit of Crimmins over his potential replacements was his ability to play both positions. Now we are more likely to see pure blockers or pure WRs in what would have been his snaps.

Crimmins' absence does raise some questions. Will he return to BC next year to use his final year of eligibility? Will Addazio find a 5th year over the summer? I think both are unlikely. I don't know if Crimmins would want to come back and I don't know if BC has any recent grads in their pipeline.

Good luck to Crimmins wherever he finishes his career.
Posted by ATL_eagle at 5/28/2015

Why would Crimmins leave if everything was on the up and up?

I also would like to find out why the young man is out. Is it related to academics? Why might he come back next year? etc.

There would be some great opportunities for his experience to team up with a more experienced Callanan.

Or teaming those guys up individually with packages including our speedier wide receivers.

I hate to see a guy leave - but that's life, I guess. I'm still curious.

I can't imagine it being an easy decision for him to make, but his family stands by him and supports him 100 percent. Sometimes in life, especially when you are young, you are faced with a tough decision and you have to leave one opportunity to explore another. Often if you dont explore what is through a door that life opens for you, you live your life wondering 'what if?'. I know Dan will be successful in all that he does in his life and I'm excited to see how far he takes his talent. Thanks for the positive feedback!