No one knows anything 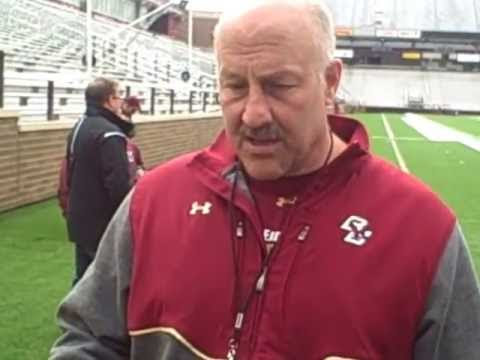 I try to avoid posting too much gossip because it tends to blow up in my face as often as it is proven correct. There are a few major issues floating around message boards and Twitter that I am going to shoot down. Of course I could be wrong, but we will see.

Myth No. 1: A new Athletic Director will be in place by Christmas

This is on the Eagle Action boards. While I think that a public announcement might be made on Brad Bates within the next 30 days, there is no way BC has a new, permanent Athletic Director in place by the end of the semester. As the power structure on the Board comes together, they are not going to rush into a new A.D. decision. And the politics alone of how this all will work within the Board and the President still needs to be figured out.

As I have been saying all along, Addazio's status is completely independent of Brad Bates' status. Bates can't save him and the idea of letting the next A.D. decide was not a factor. If Leahy and the Board feel he needs to be fired after Wake, they will fire him.

Myth No. 3: the Wake game does not impact Addazio's fate

If he gets to six wins, he is safe. If BC gets blown out (by 20 or more points), he is toast. The real grey area is a close loss that finishes the season at 5-7 and in a bowl. Addazio was told he had to win six games this year. Five wins clearly isn't six. But I think the bowl game might be a bit of a lifeline and I think the new Board involvement repesents the unknown. Will they say "he didn't win six, he's out" or will there be some backpedaling on the win total? No one knows. I don't. Message board posters don't. People on Twitter do not.
Posted by ATL_eagle at 11/23/2016

Myth: The BC brain trust knows what the hell it is doing. Fact: It will ultimately come down to a coin flip or throw of a dart as to whether Bates and Daz return.

It just amazes me that the leadership at BC doesn't see what we do on this blog. How can they NOT take the necessary steps to clean house in the athletic department from top to bottom and infuse the necessary resources to win?

Boston College raised over $1.5 Billion in the past few years from private donors; BC's facilities should be up at the top in the ACC even if they invested a quarter of that money into the football program. Why did BC even move into the ACC if they wanted to be a stepping stone school?? Either you heavily invest in your football program or move to a smaller conference like the MAC or Sun Belt. When BC moved to the ACC I thought it meant that they were going to take their football program seriously. Teams like UConn and Wake Forest have been to big time bowls over the past decade, BC hasn't been to a major bowl since the Cotton Bowl. BC raised over a Billion dollars, can we pay a big time coach like a Chip Kelly to come to BC and turn them into a powerhouse program instead of a stepping stone for aspiring coaches? BC has the money to pay a top 5 coaching salary, they need to stop being cheap. The indoor practice facility was a step in the right direction but they need more. BC can be great, it's just the cheapness of the ones running it. If you build it, the fans will come.

I never understood how a school like Notre Dame can be so much more successful then Boston College when they both have high academic standards and both Catholic schools. You'd think players would be attracted to BC given that it's right outside of Boston and Notre Dame is practically in the middle of no where. It all comes back to priorities, Notre Dame invests in its football program and BC tries to get by with as minimum as possible. BC raised $1.5 billion so the school clearly has devoted alumni. Wish they would take their program seriously otherwise what was the point in joining the ACC? Just to mooch off the conference profit sharing program?

Chris, the Master Plan that's funded from that campaign includes a new Plex (badly needed for the whole student body). Stokes Hall and Thomas More Apartments (a nearly 500 bed dorm where More Hall used to be) are complete. I believe there's a $200 million campaign which includes an indoor practice facility and a new baseball/softball field complex.

Notre Dame has had a long tradition of winning in football that outstrips ours by a wide margin. Success perpetuates success. They fill an 80,000 seat stadium and for now, get a ton of money from NBC to televise home games. Their revenue stream dwarfs ours. They're independent in football so they don't split money with a conference.

Thanks for the reply, I agree with you. It would be nice to see BC hire Chip Kelly as their next head coach if he gets fired by the 49ers. I know the odds are very slim however I've heard that Chip Kelly has a very favorable opinion of Boston College. I guess I can keep dreaming.

If myth 1 and myth 2 are independent of each other Boston college is more screwed up than anyone really knows.

Chip has certainly failed ad a pro coach. Bring him back to his comfort zone.

Daz will be the first to tell you is is a smart MFer in picking coaches.

Indeed, two coordinators he hired are nominated this year for the Broyles award

Oops. They both left BC. Don Brown and the supposedly horrible OC Todd Fitch

I guess we can say. 2015 defense was great despite Daz and the offense horrible because of Daz - Fitch is absolved of sin

Are you retracting your hatred for Fitch mod?

It's hard to believe that Bates extended this guy to 2020 after 2 seasons.

Addazio sucked Bates into 8 years, like he was some hot coach in 2014 and schools like Michigan wanted him.

BB -- criticism does not equal hate. no hate of fitch.

and, actually,i recognized Fitch was a patsy right away: "Daz is in charge. Not Fitch. Fitch will obey as did the very overrated and docile Ryan Day. "

Two major constraints that BC deals with but is not discussed by the comment section are Space and Boston politics.

BC isn't in a corn field.. so there is not the real estate afforded to ND, FSU or Clemson to build massive athletic complexes

Second, the Master plan has been in place for years, but the school was unable to move forward due to local political issues. The school never denied the team resources, they could not get the permits to build earlier. Other Universities simply don't have this issue

If BC wins the game vs GT (which they dominated and handed away) and the Cuse game (also assuming they beat Wake), would this year feel different to anyone ??

To me this is the problem. Even if we were sitting here after the season at 8-4, the results vs elite schools leaves way too much to be desired. In year 2, while BC had a legitimate shot to win 8-10 games, it felt different. Even at 7 wins it felt different. BC could honestly have won 8 ref season games in '16 and a 9th in a bowl game and I think many would still want him out for his shitty attitude and results vs the powers, I know I would.

I agree with you Joe, and here's something to consider. We SHOULD have lost (or at the very least gone to OT, which would have been a likely loss with the maestro of clock management at our helm)the NC State game. That would put us at 4-7 and 0-15 in ACC. Ga. Tech played a lousy game...Johnson acknowledged as much post-game...and STILL won. Cuse sucks, but kicked our asses at our house with a first year coach.

Addazio might be the worst coach in BC history...the results support that contention. Great assistants leave, great players don't want to come, and fans stay away in droves. And he loses by historic numbers. Other than that, all is well on the Heights!

Some interesting points brought up in this comment section. You can definitely tell the glass half full from the half empty folks. Either way there is no denying that we are not where we collectively want to be which is a team with an overall winning record that is at least competitive against the power schools and when the starts align have a shot at the ACC Championship. This is not lost on the administration and for that reason we will likely see and accelerated change with the AD before the end of the year. Whether they conduct a search or already have a replacement lined up remains to be seen. The new guy will make the call with Daz and no one on this board can predict what direction the new AD will go but my sense is that the outcome of the Wake game and potential bowl game will be a factor.

Thanks STL. Your post makes a lot of sense.

The new guy AD could be a gal by the way. It is about time that BC consider that possibility. There is a female assistant on staff who has experience as director of football operations. She at the very least deserves serious consideration. Life continues to evolve and recent events with Luke Kuechly have shown that football has some serious shortcomings which are evolving into a mess. The charges of yesterday against the French school make matters even worse. The Irish (sorta) are charged with a minor mistake by one ambitious assistant and given a penalty of the loss of wins for two years. Meanwhile, Louisville skates with furnishing prostitutes for the basketball team and Alabama is okay with bringing in "pay for play" former players to act as the scout team with current players seemingly partaking in the loot. The relatives of Cam Newton allegedly received 400K for steering him to Auburn and the whole incident was waved away. The ideals of ND are beyond question. The athletic environment at BC is also a mess. Let's restore sanity and bring in TC as an interim "janitor" to sweep up the mess. Let's also put the light of truth on the NCAA.