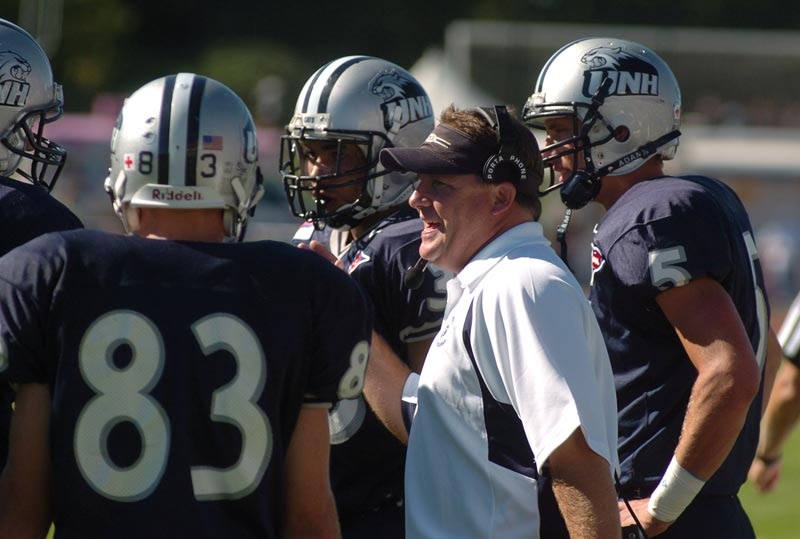 According to multiple reports, the San Francisco 49ers plan to fire Chip Kelly as part of a management house cleaning. The timing means he will probably not coach this upcoming season. I imagine his head coaching career in the NFL is over. However, he will be the hot name in College Football next fall. Any Power 5 team looking to make a change will make a run at Kelly. A lot has to happen, but I could see a scenario where Kelly comes to BC.

Kelly marches to the beat of his own drummer. Read any profile on him to see how he tries to zig when others zag. Sure he could easily walk into a cushy job next December like UCLA, or even Notre Dame or Tennessee, but is that what he wants? All of those sorts of jobs come with huge expectations and huge microscopes. At BC he could return to New England, be near his long-time friends and do nearly whatever he wants. Any challenges of the job like recruiting or money could be offset by Kelly's cachet and cash.

I know no one believes this but Kelly expressed interest in the job when we fired Spaz. It was via a third party and Bates never took it seriously or pursued it. Now it will be up to another AD to pull of the most delicate courtship in BC history.

Oh, there is the fact that we currently have a head coach. I don't know what sort of relationship Addazio has with Kelly. The coaching community is small and they both share a common connection with Ryan Day. I don't know if Kelly would avoid any BC talk out of respect. Who knows? Also, it might not seem fair to speculate on Addazio's job after ending the season with three wins. But the man remains under .500 and has only won two ACC games in two years. If he finishes 7-6 again, I have no problem with BC making a change and swinging for the fences. With how these things go, BC will know if Kelly is interested well before BC's season is over in December.

But all of this will really depend on how BC changes its Sports Leadership. Aside from an AD change, there has been plenty of talk about a financial and Board of Trustees commitment. If BC wants to show its commitment to upgrades to its fanbase and the college sports world, there is no bigger sign than pulling off a Chip Kelly signing.

In the end, I doubt it will happen. There are just too many things that have to fall into place. But that doesn't mean that BC shouldn't try to pull it off.
Posted by ATL_eagle at 12/31/2016

It actually is possible! Kelly's quirkiness and massive bank account could point Kelly home (with your buddy ryan day)

I would love to see Chip Kelly coach BC, unfortunately BC is willing to settle for borderline mediocrity so Steve Addazio will stay as long as he gets them to the All-toilet Shit Bowl with a 6-6 record every year. Do I believe Chip Kelly would be interested in the head coaching position at Boston College? Absolutely. But it won't happen because BC is stuck with Addazio.

Maybe Temple could take one for the team and buy out Addazio's contract. Addazio is a MAC coach, that's where he belongs. Chip Kelly would be without a doubt the largest signing in BC history and it would indeed prove that BC is serious about taking that next step as a power program instead of just a coaching stepping stone.

News reports say the Daz was on hand to help Urban Meyer prep for Clemson.
That explains the 31 zip blow out.

He who hesitates is lost. Daz doesn't deserve to stay. His record over the last five years is 28 wins. 5.6 per year and half of those are Maine, Wagner , Howard etc. He has failed and should be fired today. Bring Kelley in for 2017. 2. What a game between Clemson and OSU. The mute is usually on when Herbstreit and Fowler broadcast. They are the same dissembling combo that told the nation Matt Ryan wasn't a quality QB but Tebow and Troy Smith were great. They fooled the naive public and the Heisman voters but the pro scouts knew what was being sold was bogus. So the sound came on late in the second half to hear the excuses for the Buckeyes. Herbie sounded and looked just like Martha Radditz on election night. Their speech was measured and weak. If the term LOW ENERGY applied to anyone they would top Jeb Bush for the prize. That made my day. To see two charlatans exposed. HAPPY NEW YEAR. 3. How has the ACC done this year in football? Everyone concedes they have the best collection of QBs. Kayaa, Kizer, Jackson, Watson and Tubitsky. What is their record vs. the Big 10 and SEC? In the regular season they were 9-4 against the perceived top two conferences. Add in the bowl contests. Pitt lost and Louisville lost. Vt, GT, BC, NCST, FSU and Clemson won. The record up to the National Title game is the ACC 15 the other two conferences six.. Even if the Tigers lose the ACC is the best. They can only be described as DOMINANT, SUPERIOR, SPECIAL, STORIED and NOBODY DOES IT BETTER. Where have the SEC shills gone?

I heard Daz was trying to help Urban Meyer as well which makes no sense to me because Clemson is an ACC team. BC should want ACC teams to succeed since it increases the prestige of the conference draws in better recruits and more money for the conference all around.

I heard that as well which is another stupid move on Addazio's part. When ACC team perform well during bowl season it increases the profitability of the conference, not to mention the prestige when you have an ACC team going to the National Championship every year. I might be mistaken but isn't the ACC a profit sharing conference? If so then the more successful the conference as a whole then the more money for Boston College.

Urban Meyer runs the BC offense since the Dazzler was his offensive coordinator with Timmie T and they won it all. The problem is that Cardale Jones is 270 and Darius Wade and I presume Anthony Brown are 185. What's the latest on the new A.D.? There were rumors that the individual would be in place before Christmas.

Attempting to hire Chip Kelly would first require BC to hire a very strong, tested big conference AD to manage him. If you thought Jags had a big ego, this guy's ego is 100x the size. I don't see Father Leahy doing a complete about face and green light the hiring of two big personalities in those positions.

More likely as a result of SF shakeup is we get a run at Ryan Day, which could be Chip Lite without the ego. First time HC much more manageable for new AD. Would not be the worst thing.

While the Jaguars & Bills will make a run at Coughlin , I think the combo AD / HC role at BC would be ideal for him (and BC) at this time in his life. He would immediately bring a more professional, accountability centric approach to all of the sports programs, and could fix the football program from the inside for a few years as HC while grooming a successor. Once things get stabilized he can slide into AD only role until he chooses to leave. If you dream, I submit that you dream for this for BC Athletics more than Chip Kelly coming for football..

Congratulations Men's Basketball - first ACC victory in a long time and against Syracuse and that big a$$h@l* Jim Boeheim.

What in the heck has gotten into them? First Providence, then Syracuse. And they scored 96 points! I can't remember when that last happened. Maybe they finally turned a corner.

Missed a bunch of free throws late and some shots that were falling earlier, but who's complaining.

They played well enough to score 105.

I heard Daz was trying to help Urban Meyer as well which makes no sense to me because Clemson is an ACC team. BC should want ACC teams to succeed since it increases the prestige of the conference

By helping Meyer he helped Clemson.

I think Coughlin as Coach / AD would be the best scenario for BC.

Chip Kelly has not been successful in his past couple roles. He innovated the fast paced hurry up offense at Oregon, now it's something many teams and coaches can employ. I don't see him providing a competitive advantage to his teams, and don't think he is worth it. I also don't think his personality would work.

Otherwise, go for an up and coming coach who is looking to take the next step, and most importantly who is someone who kids want to play for..... recruiting needs to improve.

Regardless, we need to move on from Addazio now. He can't compete against good teams, can't recruit, and frankly seems like a meathead that I don't want representing my alma mater.

How about Bill O'Brien?

I'd like to see Coughlin as the AD & Kelly as the HC. Mix of old/new school.

Addazio has to go. ASAP.

I don't think it's recruiting as much as it is coaching. PJ Fleck has gotten so much out of under recruited kids with his enthusiasm, passion and disciplined approach on both sides of the ball. He's smart, scrappy and relentless.

Unfortunately, despite what others here may think, after Jags & Daz, I'm not sure Fleck's blue collar, rah-rah style would last long at the Heights. "Row the Boat" might be cute the first year or two, but I think our players & alums want/need a more stoic, business like football coach that has charisma, but is not over the top.