Matt Ryan is the NFL MVP 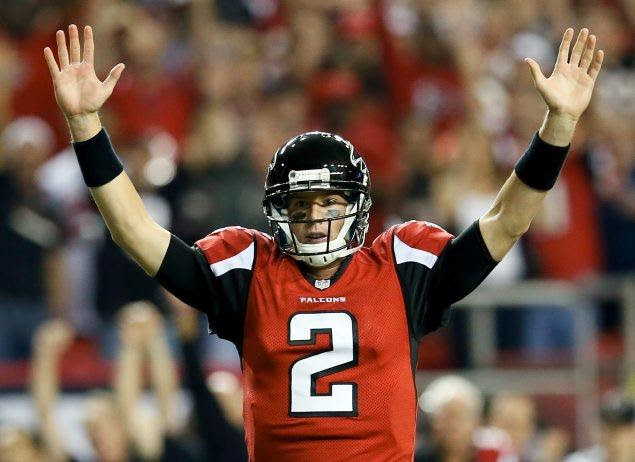 The NFL named Matt Ryan the MVP of the league. Sunday is when he can really cement his legacy, but the MVP award is certainly historic. Ryan finished ahead of Tom Brady. The New England quarterback missed the first four games of the season, but even if Brady had played, it would be hard to deny Ryan. The Falcons had the best Offense in the NFL this year and Ryan set career marks in nearly every category. He also spread the ball around so that it was more than just Julio Jones.

I didn't understand the hostility towards Ryan as he became the favorite for the award. I know I shouldn't care this much, but it often felt like because he doesn't play for one the NFL's golden franchises and because he went to BC, he was never going to be considered great by the talking heads. Fortunately, as in other sports, statistics and analytics are now overcoming "narrative."

Sunday matters more, but I am very happy for Matt. This has been a long time coming. I hope this is the first of many.
Posted by ATL_eagle at 2/04/2017

It's not hostility. It's lazy talking points. The national media hasn't watched him. I have. Every snap for, you know, all 16 games. No smashed cell phones to boot. Well deserved. Very happy.

Matt Ryan is a class act across the board in every category. Congratulations to an outstanding young man and BC graduate. I'm so proud of him.

And let's hope the new kid McDonald can follow in his shoes.

MAtt. Is Da man and does BC proud. This is great.

Arthur Blank was asked yesterday. "What was the greatest day in Falcon history?" A: The day we drafted Matt Ryan

Robert Kraft was asked the same Q. A: The day we hired Bellichick. (A micro aggression toTB12)

Look at club he joined.

Ryan makes mistakes. He throws bad interceptions and has chocked away playoff games in the past. This season he limited the mistakes and was awarded with the MVP Award. So it shows that if he deserves recognition then he will get it.

Most games come down to QB play. With the Falcons the QB play is even more paramount.

I pray. Literally. That Ryan doesn't get flustered, throw 2 picks and fumble the ball away. Meaning that he crumbles under the scrutinty today. If he keeps his "shit" together today then people will respect him more going forward.

@Knucklehead: By the way, Matt explained why he was making those mistakes. He was scouted and the defense played eight man lines and confused him with a different four rushing on each play. In a way, he had attention deficit disorder which led to post traumatic stress. The new coach, Dan Quinn, changed all that. He brought in better receivers such as Julio and Matt threw quickly to a set target area. Doesn't that sound familiar? The Dazzler faces eight man fronts and still tries to run and claims that the defense will "save the day". Hopefully, he will be gone by Thanksgiving. Matt has really grown, has shown himself to be humble in interviews, and is a worthy representative of the legacy of Boston College. Let's now all hum "For Boston" till the echoes rings again.

Dan Quinn isn't the GM and Julio has been Matt's favorite receiver for 6 years.

Maybe he was talking about Gabriel and Sanu?

Matt would do well today if he had a "Healthy All Pro" center. However, with the status of Alex Mack - everything changes. Congratulations - Matt you are a class act, but I never realized the anti- Boston College mentality in this area. It is very sad !!!!

Do you believe that Mack is hurt? I heard that the Falcons don't have anyone on "hurt" list? Doesn't the league mandate that injured players be put on the list?

I am calling bullshit on the Mack injury.

He is playing hurt (ankle, lower leg njury). The big question is will he aggravate the injury. This guy is needed for sure.

Knucklehead - CBS sports (and also Adam Schefter -ESPN) say that Alex Mack has a fractured left leg , but he will play. Back in 2005 , Terrell Owens played with a similar injury against the advice of his MD , and played fairly well. He also has a high ankle sprain. Do not understand NFL injury reports , but he does have these injuries and they kept him out of practice for a week and a half - he practiced a little on Thursday and Friday. He broke this leg also back in 2014. They will shoot him up with painkiller etc. This situation is scary from 2 standpoints - HIS FUTURE CAREER and then without him , Matt will be seriously impaired without his leadership and this would lead to damaged confidence and maybe turnover problems.

I heard the reports, thank you. Last night the reporting was that Atlanta had nobody on the injured list and the Patriots had Hightower among others as Questionable. Then Mack has a broken leg 6 hours later?

If Mack isn't on the injury list now then I think the broken leg is BS, mind game.

K - Head , I have no idea the mind games that are involved and I am sure that you read everything about injury reports etc unlike myself , but I believe that the NFL can not only fine the team , but may also take away a draft pick.(maybe you could educate me on that situation). My major point was simply the negative impact that an injured All Pro Center would have on the performance of Matt . And , quite frankly , I am a huge fan of Matt and I also want him to perform well - WIN or LOSE. I have listened to so many Pats fans saying that Matt would "Choke" under the pressure of a Bill Belichick defensive scheme - It has annoyed me to no end and I hope that he shreds the Pats defense. WIN or Lose !!!

I have never wanted a Super Bowl win as much as I do for Matt Ryan, Josh Keyes and the Falcons. I'm a born and bred New Englander, but very much over Belichick and Brady. I worry that Matt will try to do too much, feeling the pressure to bring the championship to Atlanta, and that the Mack injury could throw Ryan off his game; hope it won't affect his play.

It does seem like a very different Falcons team this year, with Matty Ice living up to his name. I hope he can maintain his cool - no INTs or fumbles. I am a total nervous wreck about this game.

Ryan might be the MVP but he's a choke in the super bowl...seriously Ryan? How many times are u gonna sit in the pocket for 10 min and take a sack?? My god...