ESPN's projections aren't optimistic about BC 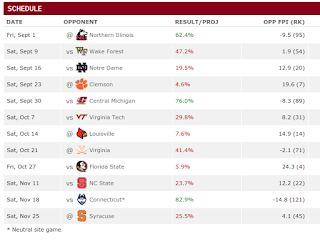 ESPN published their FPI projections for the 2017 season and their computer simulations don't have much faith in BC. As of now, we are only favored in three games. Wake Forest and Virginia are within reach, but still have us an underdogs. While this is proprietary stuff, I imagine the Sports Books will have similar expectations going into the season.

As we know, games are not won in simulation. BC also has many factors that would hurt in a modeling situation -- new QB, lack of stat sheet filling playmaker, losing some productive defensive players. A model will always have trouble predicting growth, maturity and development. I am more optimistic about our chances. I think we will win the three games ESPN predicts and then split with our peer programs. I also hope we are at the stage where we steal a game from the powerhouses on our schedule.

Why are computers always so high on NC State? They seem to underperform year after year

If you use the sum of the probabilities method (add up each percent chance of a win in decimal form).. you, get 4.03 wins.

So, this projection suggests that Dazoo will got 4-8 and no bowl. Silver Lining: he will be fired. #firedaz

EsPN is also projecting that BC may go win less in ACC play. We are not favored in any ACC games.

Even against Syracuse, BC is said to have only a 25% chance of winning.

Agaisnt VT, they give BC a 30% chance of a win. That seems way too high.

Assuming the next coach is the second coming of Ara Parseigan , any projections on how many years he will need to right the ship of state?

usually a new coach should show definite progress by year 3.

Why are you talking about Ara Parseigan? Not sure why that school has to come up in conversation so often. It's a waste of everyone's time.

JUST IN: Daz seen sprinkling paper clips on his desk over the UCONN prediction.....#DecideToCry

if you assume we lose to FSU, Clemson and Lville (duh, of course) then we have a 21% chance of going 0-5 in the rest of the ACC games.

I don't see the downside of firing Daz right now....today.

Let one of the assistant coaches run the team and see what they have. It will not be any worse than Daz running up the middle, punting inside the 30 and going for 3.

This season will be nothing but more of the same from Daz. He has demonstrated he has reached the top of his "game". Asking anything more from him just continues the dialogue of excuses.

I say end it before it begins. That would be leadership.

@NYCeagle: Don't knock the "Era of Ara". According to Wikipedia, he is part of the Holy Trinity of coaches at ND with Knute Rockne and BCs own Frank Leahy. His father dodged the Armenian genocide along with his French mother. With a middle name of Raoul, how can he go wrong? BC could do no better than with a coach of his caliber who came from Northwestern. ND has become a pseudo Catholic institution with support for all of the liberal causes. BC is the only other Catholic D-1 school. Now, it appears that someone is pulling the plug on BC football. Father Leahy should have stepped in long ago. Tom Yawkey laid the groundwork and now we have a new standard of ineptitude. To be favored in only three games without the coach being fired is absolute "bottom of the barrel" leadership. I say that they lose at least one of those three. Neither MAC game is a gimme.

I am actually optimistic that we will be a better team than last year. Of course our opponents are not sitting still, so who knows about wins.

But with better coaching somehow, we'll be much better.

Translation - let your coaches do what they were hired to do. Empower your staff, Addazio - and embrace servant leadership!

And step aside from big in-game decisions. You are not up to the task.

Put on some nice clothes and look/act like a CEO Head Coach! Give us a chance to win!

Just reading BCI and read that starting O-Lineman Elijah Johnson may have incurred a serious knee injury during spring practice. That would be a blow to not only the young man who started as a Freshman last year, but also to an O-Line that has struggled in the past.

WHAT ARE WE WAITING FOR? TIRED OF MISERABLE UN-BC EFFORTS AND RESULTS>

SHOW HIM THE DOOR. ANOTHER YEAR OF STUMBLE BUM QBS.

Anything less then 8-4 Addazio should be fired.

I am sure we will show improvements, but not win any more games. This is where it will really get dangerous.

Addazio will sell the fact that instead of losing by 50 to Clemson FSU and Louisville, we lost by ~21. As a result we are markedly better and this, by the "year 5" standard, exhibits the growth of the program. Starting to hit our stride. Just wait until "next year."

I'm literally cringing at this scenario.

Just read your chap book! I saw this website in the "About The Author" section. I really enjoyed your book and if you decided to write in this blog anymore I wouldn't be upset.
sports update

I view Daz an an unholy amalgamation between a White House Spokesman and a cockroach.

Daz, like a cockroach, has an amazing survival instinct. And like a WH Spokesman, he will spin any news as something good about him.

Can wait for his departure.

Great resource, healthy food really does not need to break the bank.I really like what you gues are up too.I really like it that very nice.
Nice this list. Every time I go to the grocery store I find myself mulling over each item going..."which do I choose: healthy or inexpensive"
I have included u gues in my blogroll.
Best Choices

Fire Daz now. Take the money hit. Move in. The man is a joke. The sooner he is gone the faster the program gets back to winning.

Daz would have are hard time deciding to order between the steak or fish at a bad restaurant.

I can't belive anyone buys the crap he sells.

He gets one season. No use firing him now.

There is a use - it says that BC has had enough with clienshie coaches and ADs.

It makes no sense th keep a lame duck, inept coach roaming the sideline and F'ing up every game. He is a cancer no one has the balls to cut out. Why? Because they look stupid for giving the man a contract extension. Please all people, business and schools make mistakes.

Fire him today. Hold press conference that al Washington will be the coach. Take lumps for half a news cycle. Move on.

There is no redeeming qualities for Daz. Everyday he remains he spreads incompetence.

BC wastes so much time it boggles my mind. Does anyone really believe DAz will be successful this year; against the schedule?