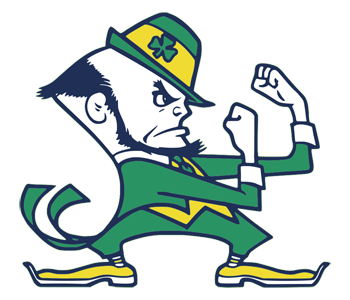 Notre Dame's Fighting Irish nickname is now under fire from a few prominent Sports TV personalities. This was predictable as the silly leprechaun has always been a straw man during debates about sports nicknames. As someone who is of Irish decent and a Notre Dame hater, I can't claim that I've ever been offended by either the name or cartoon. I don't see it as offensive and not even in the same ballpark as controversial names or mascots within the rest of the sports world.

I have met a few BC fans over the years who dislike Notre Dame's use of "Irish" but not for the reasons you would think. They claim we are the true "Irish" school given our history and population. I've never taken that argument seriously either.

As with the debate about Crusaders at Holy Cross, I think it all comes down to common sense. If either school was picking a nickname now in 2018, would they dare pick anything with any negative connotation? Of course not. But that modern sensitivity doesn't mean they should drop ties to their history. I don't even think this compares to the Yawkey controversy from the fall, since Yawkey was an actual person with clear positions that were controversial in his time.

Usually I would enjoy Notre Dame twisting in the wind, but I can't even appreciate the schadenfreude of the moment. This debate is a waste of time and energy and a distraction from the real issues facing colleges, sports and certainly our country. If you are truly offended by the name or the mascot, I can't say I share your pain or even understand it.

[Full Disclosure: my kids attend a school named Notre Dame and the sports team are the "Irish." However, there is no use of the tough guy leprechaun and the school doesn't use "fighting" in any official communications or branding.]
Posted by ATL_eagle at 1/30/2018

OMG, liberals are obsessed with everything. Political correctness is nothing more than left-wing fascism.the new McCarthyism.

Liberal snowflakes need to retreat to their safe spaces and leave the Fighting Irish mascot alone. Im a nice Italian boy and im not OFFENDED! Get a fricking life you Leftists aholes. Unbelievable, what's happening to this country.

The NCAA under Emmert was merciless in attacking the University of North Dakota over its Fighting Sioux moniker because the school was a non influential easy target. Eventually North Dakota threw in the towel and has no moniker today. So let them now take on Notre Dame and others like the FSU Seminoles and see where it takes them. We live in the United States of the Offended. The schools should all just drop their monikers and use a number instead - much like cars and airplanes. BC could become the Screaming E350SL's and ND could be called the Fighting 787's.

It is nonsense. But I would luv to see political correctness blast ND.

What would be a new name if the “ethnic slur “ is removed : the greenies? The green storm. ? (Eg St. John’s from Redmen to Red Storm ).

They will slowly change it to the "Irish."

Like the Cleveland Indians quietly changed the logo on their hats a couple years ago and then officially changed it in last few days.

Florida State pays the Seminole nation if what I heard is accurate.

Notre Dame doesn't pay anyone,except it's players, it takes money from clown nongraduates who glom on to the nickname because it represents the part of their heritage they relate to the most.

Like I said Ultimately the fighting part will be erased but the Irish part isn't going anywhere.

Like most business and people Notre Dame is not going to declare that they are keeping their name and why. They don't have to right now because there not enough pressure to do so. However. It would show some backbone if they did.

Mod, why are they dicks. That is a mean un-Boston College-like thing to say.

That is why they are the "French school" to one of the commenters on this site. As someone of Irish heritage, there is no shame in being Irish. Boston is the most Irish area in the country which caused it to be attacked in the first place by those out to destroy religion. ----That is what caused all of the turmoil in Boston over the segregation of schools. Schools were not the problem. Religion has always been the problem. The Bolsheviks who represent the radical left and are out to destroy civilization in any way possible. ND has given in to political correctness and still they are attacked. So far, BC has stood up and is being counted.---Nevertheless, being a gracious loser is not the same as "fighting for truth and justice". That was the original purpose for the fighting leprechaun and the preponderance of the Irish in labor unions. This all culminated in the election of JFK.---He was hated by the radical left. The cancer of the far left in this attack is very vivid. Actually, you can see where this is going. This is all about an attack on civilization and the creation of a radical socialist government in which BC will only become part of the Boston community college system.

I am one liberal not offended by mascots. Love them.
Jesuit schools are notoriously liberal. GET OVER IT. "HERE ALL ARE ONE working for the
greater glory of BC.
Give ND credit for a great BS apparatus and they do not accept mediocrity as some at BC
readily do. "EVER TO EXCEL" should mean what it says.
Unfortunately Fr. Monan didn't become president when he was 25 years younger.

How is this subject relevant to BC? Pointless post...

If this trend continues, the Left will find eagle mascots offensive.

First, it is really a bald eagle. That is offensive to bald people. People with hair are offended by bald people. So everyone is offended by the bald eagle. Second, in many circles it represents the United States of America and that is offensive to many people in America who don't like that people from Europe landed here, beat back Native Americans and bought the western United states from the French. We didn't overpay for that deal so we are at fault. And that mindset is all because of Obama. Who did a speech at BC in 2007 thinking that is was really BU.

Sounds logical to me, Knuck.

Story in the Boston Globe today.

JBQ -excellent comments particularly about the real issue of school segregation in Boston.

Florida State story is true but even better.
When there was an uproar over the Seminoles as the mascots, Bobby Bowden dragged the Chief of the Seminole nation before the legislature. The chief stated he was proud of the Seminole as symbols of FSU.

kinda like al pacino dragging Joe Pentangeli's brother from Sicily to sit next to him during Senate hearings when Joe was ready to turn over as a witness against the Godfather.

Someonw by your side when it counts.

Unfortunately the voice of the Chief of the Seminoles does not speak for every Seminole.

I say unfortunately because this has gotten out of hand.

Classified groups no longer allowed? Who's next? Vikings? Patriots?

As the great Bill Russell once sarcastically said of the Boston Celtics (probably when they were the first professional team to start all black players) - the team should be called the Boston Negroes.

What was okay and appropriate years ago, maybe not so much today.

Names are generally not offensive to me, but if they are offensive to others - like Native Americans not liking the Washington Redskins - that has to be taken into consideration, then the debate needs to take place and a decision reached.

I don't know the background to the "Fighting Sioux" matter, but as a 2nd generation Irish American, I am not particularly offended by the "Fighting Irish". Just weird at a school named Notre Dame (du Lac) - but there's an explanation for that, I guess.

I'm more offended by terms like "Paddy Wagon". That's feeding into a stereotype for sure.
Call it what it is - Police Transport Wagon. :-)

Anyway, it was a slow day. I can only imagine how difficult it is to run a blog everyday for years - and to come up with interesting topics everyday.

Thanks for your continuing efforts, Bill. "You the man!"

How many real native Americans want the Redskins to change their name?
How many nudniks want them to change the name?
It is all political baloney,
The Tottenham Spurs are known as the "yids."
The fans, including many Hasidim, love the team and are proud of what could be considered a derogatory name.

@BJK: While in the Navy, my ship pulled into NY harbor for the BiCentenial. There were sailors everywhere and up pulled a "paddy wagon" and the driver said hop in and I'll take you anywhere. About 20 white caps hopped in. I know what you are saying about the paddy wagon but I was happy to ride in one.

@BJK: also about Bill Russell. He was one of my heroes at San Francisco while growing up. He was a legend with Bob Cousy and how races work together. By the way, does anyone know what he does with the eleventh ring when he puts the other ten on his fingers? Actually, that happily dwarfs the legend of Tom Brady and the twisting of the rules by the Patriots.

To the question "if you could have dinner with any 3 people, who would they be?" My answer would be - one of them would be Bill Russell. ☺️

The best was when the Celtics changed the mascots' color from white to suntanned white.

They kept the pipe in his mouth though. An awesome move espoused by TGS.

I was born in this country. That makes me a native American. Chew on that, liberals.