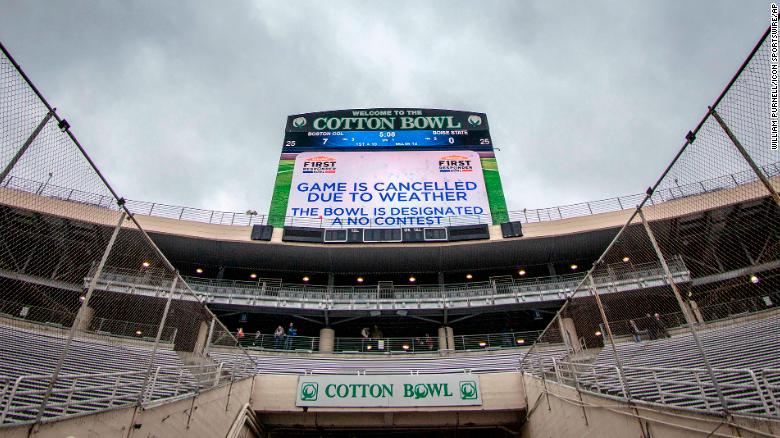 At some point in sports and BC fandom, you feel like you've seen it all. Then there is something totally unexpected, like a cancelled bowl game. BC's got out to a 7-0 lead, things were looking good, lightning forced a delay and then another and another and finally the bowl organizers and the schools agreed to cancel the game. It is officially a no contest and never happened. And with all of these crazy bowl games, that is supposedly the first time ones ever been cancelled by weather.

As frustrated as those of us who carved out time to watch were, the people who have my sympathy are the players and fans who made the trip. They sacrificed their time and money and Christmas for a game and they got ten minutes of football. We say bowl games mean nothing, but this one really did. What a waste of time and money.

This was a strange season with some great highs and frustrating lows. To end in a no contest is fitting. No one knows what to make of this season. I will have some season in review posts in the coming weeks, but it is poetic that Addazio finished with seven wins again.

Could this have been avoided? Supposedly the bowl organizers knew weather could be a factor but decided not to play the game earlier. Hindsight is 20/20. With the losing streak, the Alumni Stadium problems during the Syracuse game, the Addazio extension, the Texas A&M issues, and now this, it hasn't been an easy few weeks for Martin Jarmond. Let's hope his 2019 ends on a better note than 2018.

If there is any lesson here (beyond the planning) is that these games really are meaningless. BC might as well push for an expanded playoff, because it will be hard to get fans to care about these sorts of games again.
Posted by ATL_eagle at 12/26/2018

Email ThisBlogThis!Share to TwitterShare to FacebookShare to Pinterest
Labels: BC vs Boise State, cancelled, Servpro Bowl

This was a weird day. For the love of gawd, can the idiots who fight here every day give it a rest.

Anyway, there is no Plan B (damn it Mrs. Mod). Why are we freaking out about a random event?

We got our extra practices in. We’re good.

So appropriate that the football gods assured that "7 win Steve" was able to live up to his well deserved moniker.

Did Jarmond even TRY to lobby for an earlier game time? This guy is simply NOT impressive.

GE, it's all about ESPN. They had their time window for the game and that was that. For a regular season game, like WF early this year, sure you can move the start time. But not for a bowl game during Capital One Bowl Season.

Interesting that ATL says "nobody knows what to make of this season".

I think a lot of people know what to make of it.

It was a major disappointment.

The first bowl game cancelled since Pearl Harbor. Something sure smells and it isn't fish. It had a lot to do with tv coverage. That is where the money came from. It surely wasn't from attendance.

GRAB THE ARMY COACH BEFORE SOME ONE ELSE DOES>

and make "THE ECHOES RING AGAIN "

TONY is correct more grossness from MR GROSS himself.

Those are the beginning of the year predictions. Once it gets into the actual start of the season that is thrown out the window.

Did he predict a win over Clemson? Not even ATL could be that optimistic

So what? It's a blog that's for BC fanatics.

We don't like our STUPID play calling, among other things.

But we appreciate that someone like Bill provides this forum.

I take it that his picks are wishful thinking, with the stars all aligned in our favor and against our opponent.

Maybe he should be pessimistic and go with his worst case scenario every week.

What is the point of a prediction every week if every single week it is a homer bit? Time to give it up.

Hindsight is 20/20? This easily could have been avoided if there was a contingency plan....or if someone just looked at a weather report before the game.

I’m probably one of the few here, but I always like watching the draft. This year’s draft will be a historic one for BC. 5+ players when it’s all and done. Everytime I think about it, I just get more disappointed in our season. Whatsup with Denis regressing too btw? Hopefully Heevers doesn’t follow suit next year.

Is the power out at knucklehead's house? Things are strangely quiet and peaceful in here. In fact, mod's blood pressure is down to near normal.

After a first half that showed that Temple might win, Duke has taken them to the woodshed in the second half - 7 drives, 7 TDs to start.

A BC win would have been nice for the ACC - instead of the only cancellation in history. I'm sorry that BC was involved in that.

The weather in NYC looks pretty good for the 5:15 game. Too bad it wasn't like that last year.

THE B$G likes to beat the ACC in the Bronx.

Miami fans are probably calling for Richt's head. Wisconsin is not the good this year, but they're pushing Miami around on the LOS. The U is pitiful and wants to be on South Beach.

Same old crap from mod. Find something to bitch about.

How about the three of the most inane things to happen in mens college sports(not just Boston College) in the last 5 years. BC is beating Howard by 70 points(check the actuals pig-mod) and the game is called off at half time, Texas A&M cancels a game because of an airplane ride in the age of on-call private jets and a football game is canceled while in play because of the weather.

If they told me DeFillippo, Spaziani and Adazzio or whatever the fuck their names are were throwing games for the last 12 years it wouldn't surprise me in the least.

Pig-Mod,
From the looks of it you were alone on Christmas or whatever you celebrate this time of year and where scratching hard on the 8 ball.

The Tall One said...

What Jarmond needs right now are immediate wins in Hockey and Basketball. That will at least change the new headlines coming out about the sports program at BC. Hockey is back to .500 - but rumors coming out of campus are that York is barely able to coach at this point and doesn't even know some of his players' names. That's going to be a MAJOR issue for Jarmond if true. York doesn't want to retire. The school can never fire him. They are trying to convince his wife to convince York that it's time to move on. Good luck with that one.

Basketball - 9-2. But they're about to begin divisional play. Can they get to 21, 22 wins and clinch a spot in the tournament? They'll need to beat Hartford and then go 11-7 or 12-6 for 21/22 wins. Doubtful but still possible. Remember, this is BC - the team has had 20 wins in the past and failed to qualify for March Madness.

And longer term - football. I don't expect the team to be better next season and the schedule is a lot tougher in 2019. It'll be a miracle if Addazio gets 7-5 or better next year.

Ahhhh, I have reestablished normalcy. All is well in the forum.

Was I not going to show up here again for some reason? Shows how dumb Pig-Mod is.

Missed ya, mod. I always enjoy your colorful metaphors.

Can fix the hockey problem in with one phone call to Storrs Ct.

No need to spend thousands on a search committee a stupid Pig Mod like recruiting firm or anything else.

Offer it to coach Cavanaugh(spelling?).

I would love to see a return to hockey greatness. BC used to be the Bama of college hockey - or close to it.

All I did was state a fact. You were crying about everything under the sun. It was a fact. Even CTeee saw it.

Then you go off the reservation into bitches, hoes, my education and blaming everything on other commenters like I wasn't going write something about all your droning negative comments that take up half a page and say nothing insightful.

Stop being a pig, Mod.

So glad we lost to a very good Purdue team, currently behind Auburn 49 to 7 in the first half.

I am kind of pissed out it. That Florida State game is still stuck in my craw too. Flat pissed.

Nothing was invested either.

Steve Addazio is scheduled to be one of the analysts for the Orange Bowl matchup between Alabama and Oklahoma.

How can he comment on plays he has never used or considered and may never have seen?

When Clemson beat Alabama 2 years ago, this is the guy who said he'd kick a FG and play for overtime.

Maybe ESPN will offer him a nice gig.

Dazoshit can be counted on to lose at least two games through his inept coaching skills. Perdue and FSU are vivid examples.

Our defense, which was on the field twice as long, gave up only 2 touchdowns and 2 field goals to Clemson. The other TD was a special team breakdown - punt runback.

Desmond Howard picked BC to upset Clemson. I guess he thought we'd try more than 3 or 4 plays, even with the backup QB.

This team was capable of winning 10 games in the regular season in Year 6.

That's why we're so disgusted.

Nice summary, BJK. The stars were aligned for a special year. A strong senior class, a great tailback in Dillon, a very weak out of conference schedule and an ACC that was mediocre outside of Clemson. All that and we get Seven Win Steve riding again.

Next year, we could easily go 5-7. And we'll have to buy out Addazio and hire a coach who understands there are more than 4 offensive plays to run.

Yes, but according to ATL the season was filled with "lots of great highs" and "nobody knows what to make of the season".

Syracuse had better not stink the joint out like they did on the first 2 series.

Why do I care? Because they killed us and made our defense look pitiful. (I think our guys may have just gone through the motions in that game [if not quit]).

WVU played a Dazoshit offense. What do you expect?

Purdue. Setting records. For the other guy.