Florida State is reminder that BC is a good job 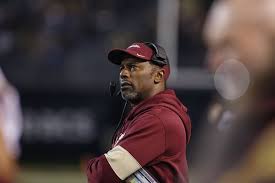 When BC makes its next football coaching change (a discussion point for a different time), there will be plenty of talk that "BC is a really tough job and no one would want it." I have always worked hard to shoot down this argument, but with BC facing an interim coach at Florida State this week, the difference between what is considered a good job and a bad in college football has never been more subjective.

Florida State fired Willie Taggart 2/3s of the way into his second season as head coach. His record in Tallahassee was 9-12. He will be paid handsomely but will never get as high profile a job again and never even got to bring in a full class of his recruits. And the Florida local, just lost his dream job. That -- in my opinion -- is a tough way to go.

Meanwhile Addazio is in Year 7. In that time he is only one game above .500, and 21-33 in ACC play. He has only won one bowl game. He's never won more than seven games. He's paid nearly three million annually. He gets to live in a great city. He may be under some internal pressure and hear from some whiny fans, but mostly gets to avoid the scrutiny that his peers in other P5 programs face. BC built him new facilities. The expectations are reasonable.

I don't know if Willie Taggart deserved to be fired. I've only seen bits of Florida State this year and what I saw looked like a mess. But my point is that where other schools are finicky and rash, BC can be patient and cautious. For a profession with some much chaos, the opportunity at BC should be appreciated.
Posted by ATL_eagle at 11/05/2019