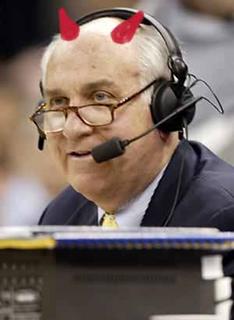 Bloggers sent Dan Rather into early retirement. Can we take down Billy Packer next? The blogpoll is college football focused, but the roundtable members didn’t miss the opportunity to vent their Packer dislike. The surly hoops expert was the target of Westerdawg (who provided the Packer shot above), Straight Bangin’ and Section Six.

When it comes to football, Aaron Taylor is relatively new to the national scene, but he has shot up the list of pointless pundits. Brian and The Nittany Blog, BoifromTroy, Action Berg and Xanga listed the guy with the enormous head filled with empty thoughts as their least favorite analyst.

I was surprised that Catholic Packer Fan was the only one to mention Musburger. Don’t worry CPF, as Brent would say, you’re commentary was “pivotal” to this roundtable and your post was clearly the “Post of the Century.”

The print guys did not come out unscathed. Paradigm thinks Drew Sharp of the Detroit Free Press is a waste of ink. I loathe the Boston Globe’s Mark Blaudschun. Bruinsnation tries to avoid anything written by Bill Plaschke.

Like any good critics, we also wanted to recognize quality work.

EDSBS love Nessler so much they want him to go by a one-name moniker like Cher, Bono or Brazilian soccer stars.

As the worldwide leader in sports, ESPN has the biggest target when it comes to sports media criticism. But the blogpollers give credit where credit is due. AgRyan thinks Herbstreit’s passion and professionalism are the keys to his success. I Blog For Cookies loves the whole Gameday crew.

Syracuse launched the careers of half the sportscasters on the East Coast, but Orange 44 did not let that influence his opinion. He noted the underappreciated work that Bill Curry does every week.

A common theme throughout the responses was love for the band of blogging brothers Brian put together. EDSBS, Sexy Results and BGS were specifically recognized for their unique takes on college football.

Then there is Trev Alberts. The Jan Brady to Herbstreit’s Marcia was the inspiration for this roundtable. He may be gone, but he is not forgotten. Struggling Joe stands up for the former Husker and longs for his return. Stay strong, Joe. Annoying media personalities have nine lives. One day soon, Trev will return to enrage fans and media execs again.

oh man, i forgot Aaron Taylor. That guy sucks crap through a straw. He is actually worse than Craig James, Lou Holtz and Terry Bowden when comparing all-time disasters in the studio.

Hey, I really enjoy your blog. I'm a BC'03 guy and also have a blog but its based mostly on Philly Sports and other random stuff. Anyway, ESPN Insider has their ACC Notes and in them they call BC's coach "Jim O'Brien." No respect.