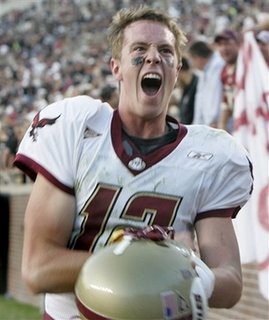 Matt Ryan has already put out a restraining order against me.

Like most loves, I never would have predicted it would turn out this way. Matt seemed plucky in his first extended appearance against Temple. But a week later he was part of one of the biggest disasters in BC history (the Syracuse game).

But like the strongest loves, it grew and blossomed over time. First the win at Death Valley. He was unfazed by the pressure. Then he pulled off a miracle against Wake Forest. We had a Quarterback controversy and I clearly knew which side I was on.

Things progressed and the crush blossomed. Undefeated as a starter in 2005. Downfield throws became part of our conservative offense. Composure in the pocket.

When your in love, the pain runs deeper. I felt anguish over his ankle injury. Yet watching him overcome the pain and continue winning made my one-way bond stronger.

He took it to a new level last week. As I mentioned the gimpy endzone scramble followed by a bomb that no one else could have made left me speechless. The pass was the equivalent of a dozen roses. I nearly skipped over the bleacher in front of me and let out about three “holy shits.” And with the win, Matt earned my totally devotion (I am singing Olivia Newton John’s Hopelessly Devoted as I type this).

When Paul Peterson graduated, I never thought I could love another BC QB. Little did I know I would get to see someone with Paul’s guts, heart and smarts combined with an NFL body and an Ironman toughness.

Not only is Matt Ryan the best QB in the ACC, he is the best QB in college football. You can have your Quinns, Tebows and Smiths. With everything on the line, I am taking Matt Ryan. But what do I know, I am just a fool in love.

On my way to get some Viagra Online I encountered your marvelous site!
As a fact of matter, I have always liked everything related to Atlanta since I went there once ago, in a nutshell, I loved that city.

Thanks a lot for sharing this wonderful issue.