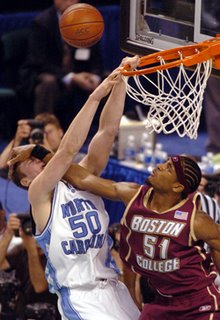 Earlier this week Sean Williams joked that he was going to set the NCAA record for blocks in one game against Fairfield. Sean is so laid back, it seemed more like he was having fun with his former BC assistant and current Fairfield coach Ed Cooley. Regardless of his intention, I was intrigued by the thought of Sean blocking 15 shots in one game (the NCAA record is 14 and shared by David Robinson, Loren Woods, Roy Rogers and Shawn Bradley). I think he can do it, but not against Fairfield.

However, there is still a chance it could happen. Looking at Fairfield's box scores, one game stood out -- their matchup against Central Arkansas. In that game, Central Arkansas blocked 12 of Fairfield's shots in a low tempo game (FU only put up 44 shots).

Let's hope BC comes out strong and controls en route to a win. But if Sean gets the record, it will a huge statistical and defensive accomplishment.
Posted by ATL_eagle at 12/06/2006