I’ve avoided the donation based seating discussion for a variety of reasons. With the announcement of a potential lawsuit, I thought I would finally touch this hot button.

I live in the heart of SEC country and think donation based seating is long overdue. I also do not own BC season tickets, so there is no skin off of my back regardless of what they charge. I get to at least one game a year, mostly on the road and mostly pay face value.

If Gene and the Athletic Department have misjudged demand and the market does not support this increase, than they will have egg on their faces and will owe the long time supporters an apology. I don’t think they are off here and I think they will get the donations they are looking for.

But in all of this many are asking “why present it as a donation?” or “wouldn’t it make more sense just to roll the costs into the ticket price?” Most assume that the school sees the donation as an easier sell than raising the face value of the seats by $200 per game. I think that explains part of it…but there is another reason for the donation. Take a look: 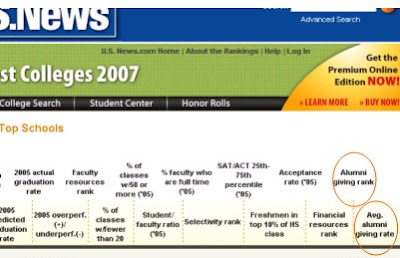 Alumni giving is a factor in the U.S. News & World Report rankings. If other schools use sports to improve their rating, I am sure BC thinks and hopes we can do the same.

The bump in the U.S. News rankings has to be one reason, but I have to assume the main reason it is billed as a donation is so people signing the checks can write it off as a donation to a non-profit on their taxes.

It's also worth noting that U.S. News doesn't have a minimum donation amount. Why not just require a nominal donation of $5-25 for the remaining seats? That would inflate their numbers even more.

I bet Gene likes your thinking Mark. Look for the $5 donation next season! Ha. The tax write off is another good reason too.

Yes, and then they'll switch everything to the mandatory donation model. Kids in the dining halls will give required donations in exchange for food. Bookstore, etc.

Mark, I see a spot for you on the board of trustees.

Actually, making it a donation makes it easier on the buyers because you only have to pay the maximum amount for whatever you want to get.

On the Donation front, this is a very TYPICAL "Pre-Flutie" BC fan attitude, "I want my seat that I've had for 50 years and only make 50% of the games (No, i show up for every game, but I start mid 2nd quarter and leave between 3rd and 4th quarter.)"
BC NEEDS this to program to make compete with the elite programs in our league, To the rich Boston Blue-bloods, start bleeding Maroon and Gold, and cash out 1000 from your yachting fund to pay for BC tickets.

ON ANOTHER NOTE, Bill, congrats on just moments ago being named the Best ACC Blogger!

ATL...(and let me preface this by saying I am not a pre-Flutie BC fan) yours is by far the best BC blog out there and I rarely disagree with what you write, but this donor based seating thing is ridiculous.

So let me get this straight, a BC alum who has had his 40 yard line seats for 25 years who, in that time, has donated over $100,000 to the school, now has to pony up an extra $1,000 a year, when he is on a fixed retirement income, just so he can keep his seats. All of this is so BC can "compete with the elite” as if the money that he gave in past doesn’t matter. Yes, I do believe there should be donor-based seating, but by no means should Gene D be raiding the pockets of the very people who have given millions to the school over the past half century. There has to be a better solution through either implementing a $1,000 year donation to NEW season ticket holders in those sections or some sort of point-based system.

One thing that also rarely gets mentioned in these discussions is that the price for tailgating passes was raised yet again. BC is already getting more money through these donations which also count toward the donor based seating. Those who have the better seats that do not tailgate, however, are sh*t out of luck even if they already donated that fee 100 times over the past 25 years. I want us to be better too, but that is not achieved by p*ssing off the very donors who brought BC to where it is today.