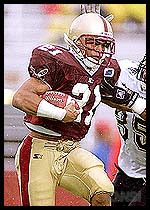 Running a good offense is not easy. To succeed you must be a good game planner, play designer and play caller. I always thought Bible did pretty well with design, was an inconsistent game planner and a poor play caller. Too often I felt Bible either stuck with something that wasn't working too long or moved away from something that was effective without explanation. In Jags' second game he realized when something is working, you stick with it. Look at the stats.

295 rushing yards! Gotta like that. Best of all the game was a huge comeback. We went into halftime down 17-3 after two Hasselbeck INTs. Omari Walker ran well but got dinged up in the first half. In Walker's place Jags gave the ball to Mike Cloud and let him and our very good line go to work. They opened holes up the middle. Cleared out spots on the side. Got a great push. And Cloud ran to daylight. He had 209 yards in the second half! Jags was only in his second game, yet he was impressing people. Here is what Don Nehlen had to say after the game: "They're offense was almost 80% more than it was against Temple."

So what can we tell about the game? As far as trends and tendencies go, Jags called far more runs than passes in this game (52 to 24). But there were good signs, MattHass connected with eight different receivers. The passing TDs were not big plays, but given how Cloud was rushing, it makes sense that we moved into the red zone with ease.

Email ThisBlogThis!Share to TwitterShare to FacebookShare to Pinterest
Labels: Jags as OC