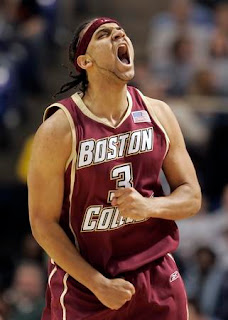 Nothing is out of the question now. We could tank the rest of the way or we could make the Final Four. The Final Four is less likely, but as George Mason proved, you just have to get hot for four games. Plus we will have the best player on the court in majority of our games from here on out. In basketball that means a lot. Our success or failure will really ride on Dudley. Here is what he needs to do.

Offense: He needs to post up on nearly every possession. Jared has been much more of a wing player this year. It made sense with Oates and Williams on the floor at the same time. He can and still will get some time at the perimeter, but to be most effective, he is going to need to be near the lane. From there he can either get easy baskets on the low blocks or get the flex working from the high post. I expect BC to slow the pace down. Jared also needs to stay close so he can grab as many rebounds as possible.


Defense: I don’t think Al will change schemes midseason. Our zone (amoeba, matchup, whatever you want to call it) will probably stay in place. What I expect, is that Dudley will probably switch off more and stay closer to the basket. This is twofold, so he can fill Williams' role as the traffic director and so he is in a better rebound position. Dudley is a great perimeter defender and good at disrupting passing lanes, so this will hurt. But we will need defensive rebounds.

Team morale: I never got the sense that this was a tight crew. I specifically remember Dudley saying he didn’t talk to his teammates much during last offseason. Basketball players have also flocked to live in singles in 66 for years. I don’t think they need to be brought together, but they probably do need a shot of confidence. We all know Skinner is not going to provide any “win one for the Gipper" speeches. That leaves Dudley to let these guys know they still have something to play for.

I still think we make the tournament. If we do anything more (like win the ACC or make a deep run in the NCAAs) it will be on the shoulders of Jared Dudley.

Thanks for site. The updates are great.

Keep in mind, Dudley is leading the league in scoring AND rebounding. There's not a whole lot more he can do. I know you think he needs more shots, but a lot of his success is due to a willingness to work in the offense.

One thing that kinda bugs me is that either Haynes is not the player Al thought he was or Al forgot about a back-up PG for this team. Haynes is over-matched a lot of time and turns it over way too much. Foul trouble for Rice spells doom.