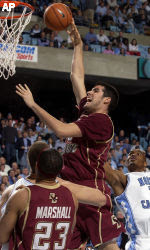 For someone of whom I expected so little, John Oates really disappointed me this season. I never expected him to be a star, but I did expect year over year improvement. Until the final two weeks of the season it could be argued that his play regressed this season.

He was more aggressive in taking his shots from the perimeter. He was not more successful at making them. He cost us possessions and worst of all on these bombs – he neither got in position to get the rebound or got back on D.

His chucking upset me. His lack of interior effectiveness had me slamming counter tops. Oates doesn’t have quickness or hops, but he does have size. Yet he routinely got pushed around and couldn’t finish.

With the Williams departure, Oates had a chance to step up. He didn’t. This season was just one frustrating moment after another…until the ACC Tournament. Oates played well. Shot better. Rebounded. Improved defensively. Functioned on the court at the same time as Blair. It was a redemption. It gives me hope for next year and improved his final grade. He’s not a great player and never will be, but he peaked at the right time and left the door open for a serviceable season next year.

Some of the Oates's poor play must go to Skinner for not realizing that in the beginning of the year a Blair/Williams combo would have been much better. I have high hopes for Blair next year and if he works hard, I think he can turn himself into a 2nd round NBA draft pick.

There is no way that Blair will go in the second round. That is one of the more outrageous claims I have ever heard. That being said, I hope Blair continues to improve.