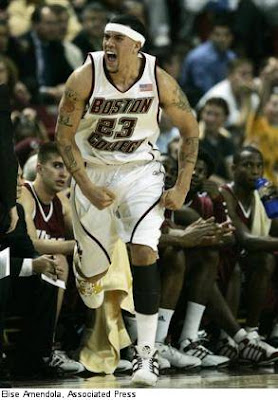 I am not a big Sean Marshall fan. Through most of his career, he frustrated me as much as Oates. But this year he did improve enough for fans and announcers to start grouping him with Rice and Dudley as the “Big 3.”

The highpoint of his season and career came in the final seconds of the Florida State game. His buzzer beater won the game and gave Sean his moment in the sun.


Despite the FSU heroics and improved production, this season still contained a few Marshall lapses. In these games Sean was a nonfactor scoring and often a liability defensively. Other smallish gripes: Marshall never became an effective open court ball handler, still looked for his inconsistent outside shot, even though he was much better cutting to the basket, and still threw up ill advised shots (the fling against Gtown still sticks in my mind).

But overall, Sean did get better throughout the season. His maturity and consistency served as role models to the team. He won’t be remembered as an all time great, but he did keep the team together during a turbulent season.

added just for you.

HA! Thanks. Just looking for consistency.

Great recap. As everyone always points out, Sean was inconsistent but always capable of being great. His efforts in the 1st round TT game showed us how good he could be when his college career was on the line. Fewer ill-advised 3s and more slashing to the hoop, and he would've cracked the top 10 all-time BC hoops list, I think.

this is more of a random comment than anything else, but has anyone else been keeping track of good ol' craig smith in the pros? the guy has been an absolute beast in the paint despite his limited minutes. i think that the past 5 games or so he's been getting more time off the bench (even playing in crunch time) and contributing about a 12-7 line. pretty impressive stuff... the timberwolves got a STEAL of a pick when they chose craig in the 2nd round. so long as craig stays healthy and keeps this up, he's due for a nice pay raise when he becomes a free agent in a couple of years. nice to see him doing so well...

With the transfer of Marquez Haynes, does anyone realize that Al's graduation rate the past 5 years is 50%? 50%!!! This is due to numerous transfers, including Haynes, Hailey, etc. and players booted from the team, like Williams and McClain. This rate doesn't even include the dismissals of Ryan Sidney or Andrew Bryant. Does anyone else see a problem here or are they just going to turn a blind eye for the Ladies' Pal. All these transfers and dismissals have hurt BC's talent pool and depth, which they sorely needed this year. Does anyone realize that Oates is the only recruit from 2004 that will graduate? What in the world is going on with Al?

I'm ok with a lower graduation rate caused by dismaissals of bad characters and transfers of unsatisfied players. What I am interested in is what's the graduation rate of our players that do complete their careers at BC; like Dudley, Marshall, Agbai, Smith, etc? Did they all get degrees?