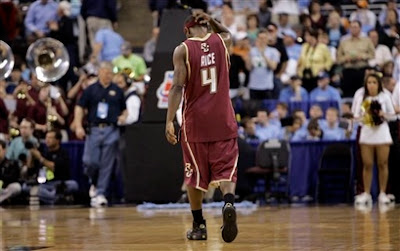 It's all on you next year, buddy.

We almost had it. This team overachieved throughout the season and was about five minutes away from knocking off one of the hottest teams in the country. They ran out of gas and Georgetown proved too much. Over the next week I’ll take a deeper look at this season and pass out grades. I’ll also look to next year, but before I get into my thoughts on this game, I need to give special thanks to Jared Dudley and Sean Marshall. I would have preferred a different ending, but both gave BC plenty of good times over four years. They are the only BC players to play in four NCAA Tournaments and did more at BC than anyone could have expected. Thanks guys. Now my thoughts:

Likes
-- 2-3 adjustment: We started in our normal defense. It didn’t work. We went 2-3 and the game changed. I think we probably should have used it more often this season as it masked some of Roche’s liabilities and created opportunity for Haynes to get involved despite his size limitations.
-- The first half comeback: We didn’t panic. We stuck with the plan. Found good shots. Rotated the ball well and made some killer 3s.
-- Rice’s scoring: Dudley is the star but the team really rode Rice’s momentum (and I think our failure to get Rice good shots cost us late). Next year is all on Rice and I think he can carry the load. Give him an open look from anywhere and he’ll make it.
-- Dudley’s final game: Classic Dudley. 8-14, 8 boards, 2 assists, 4 steals. Directing traffic. Great career. Great kid.

Dislikes
-- Shot selection down the stretch: Dudley was killing them from the top of the key, but we went away from it. Marshall drove right into the teeth of the Georgetown defense. Rice got isolated with Hibbert and he had trouble.
-- Oates and Blair: These guys have overachieved of late, but were overmatched Saturday. Hibbert is awesome and gets the calls but they also got pushed around on the boards. These guys will be solid next year but we needed more from them to beat Georgetown. I also blame the big guys for our offensive rebounding woes.
-- The tempo: The offense played well, but we needed to speed things up. The Hoyas dictated the pace and limited our offensive possessions.

This season could have been different…but, shit happens. Once again, I feel lucky to have witnessed the Dudley years. We lost, but considering we didn't get the calls, were overmatched physically, and had next to no production outside of the big 3 at least we went down fighting.
Posted by ATL_eagle at 3/17/2007

al deserves credit for changing the course of the game in the 1st half when he changed the D from man-to-man to the 2-3 zone. along with t-rice/dudley's solid offense, it allowed us to get back into it after being in a big hole. i thought the team showed a sense of calmness and composure that wasn't wholly evident in the unc/duke games. i knew we had a fighting chance to hold on when we were up at the half and even up by as many as 8 in the 2nd half...

while the final 8 minutes of the game were dissapointing (ie, missed rebounds, muffed exchange between dudley and marshall, getting no calls AND the ewing treatment), by no means would i call this loss "horrifying." it was inspiring to see dudley play the way he did... scoring aside, he had several steals and rebounds tonight that exemplified his hustle. it definitely sucks that he won't be suiting up for BC anymore, but we can only hope to see him doing his thing in the pros.

after the dismissals of the two dopes earlier in the season, the reality is that we were destined for the NIT. for al & co. to remain competitive in the ACC and mearly pull one off against gtown... it's a testament to resilience.

when all-american troy bell graduated a few years ago, i thought that was it for BC regarding tourneys and staying in the top-tier of the conference. yet, these unheralded freshmen named jared and sean (and big craig smith before them) ended up raising the bar even higher for the program. with tyrese rice running the point and being THE guy next year, one can only believe that al will continue to develop his players (especially next year's solid incoming class)and raise the proverbial bar even higher.

jared & sean deserve thanks for an amazing 4 years at the heights.

I don't think Al's switch to the 2-3 zone in the first half mattered all that much. I think the thing that hurt Georgetown's offense in the first half was the loss of Hibbert to foul trouble. Georgetown made its first 5 shots, then Hibbert sat. They never really looked to the inside for points until the start of the second half after Hibbert came back in. And can I ask why Al had 3 guards on the court in the final minutes when BC was getting killed on the boards? Isn't the object to get a bigger lineup in order to have a better chance of getting a rebound. And why was Oates in instead of Blair at the end? Blair is a much better post defender than Oates will ever be. Oates cost BC the game with his "rebound."

Thought we had them on the ropes. And I couldn't ask for anything more out of this team--they will go down as one of my favorites for even making it this far.

It's probably fitting that we lost when a center took over the game...illustrating exactly what could have been. I will say, though, that you cannot guard a 7'2" guy when he's allowed to take 4 steps every time he touches the ball.

I would say it's "horrifying" because this team could have won the game, they got no calls and Flutie22 is right - Hibbert was walking all game.

You thought "that was it" for BC because Troy Bell was gone? That's a pretty defeatist attitude. As is being satisfied with a Round of 32 departure.

With an underrated scoring point guard and the ACC Player of the Year, this team had the talent to make a run. And I don't buy into the whole "Look how much they did without Sean Williams" notion because he was always overrated - a glorified shot-blocker with no work ethic and a terrible attitude.

It's all the more "horrifying" because we'd be playing a very beatable Vanderbilt team in the Sweet 16.

It is what it is, but let's not settle for another early exit - and jump for joy because Skinner switched defenses.

I just so angry that Willaims and McLain let us all down. I know its a dumb argument, but I cant help but think about what could have been. Great season for the Eagles, though, it just sucks they were undermanned by those assholes. Dudley and Sean deserve credit for four great years. And we can only wait to see what Tyrese has in store for us next year. Lets hope these five freshmen are all they have been chalked up to be. Go eagles.

Wow another great season. Another exit before the Sweet 16. What a trend this is becoming. Is BC ever going to get over this proverbial hump? Not with Al at the wheel.

Great effort by the team and great coaching by Al. We are a consistant top 20-30 team. Have never been there before. Very few schools will complain about that. If you want to get to the "next level" file your protests with admissions and don't run away when there are problems. Al doesn't get the same "chances" that the previous coach got nor anywhere near the other elite programs. Williams gets booted at about 8-10 other schools, period.