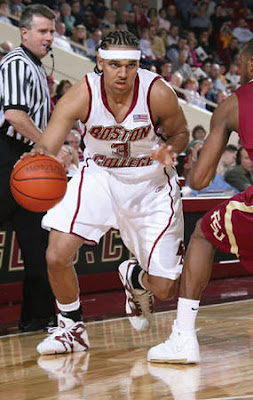 Does Jared Dudley need a grade? The guy already won the ACC Player of the Year award. He’s BC all-time leader in minutes played and along with Sean Marshall, is the only BC player to play in four NCAA tournaments. That said, here are some of the specifics of this year.

Jared’s defense was inconsistent. His overall game also seemed to suffer during our stretch grind. Teams focused on him and took him out of our gameplans. The fact that Jared did so much (all while nursing a stress fracture) was commendable, but still it was disappointing to see him struggle (relative to his normal high standards).

The things that Jared improved on were many. His ball handling got better. His foul shooting improved slightly. His perimeter game took huge leaps. He showed he could beat guys off the dribble. He didn’t have a finisher like Craig to help his assist numbers, but I feel his passing improved – especially out of double teams. He ran the floor well. And while I was critical of his one on one defense, his help D and his disruption of opponents passes were critical to our success.

Jared left everything out on the court. For that he’ll always be one of my favorites. He concluded a great career with an outstanding season.

This blog is a full entertainment package for the sports lovers and players due to its updates of sports. Its assignment writing, images and videos are all full of fun and of good quality with lots of descriptive stuff and material. It should be promoted on the social media to increase the awareness of its viewers and readers.

I fully agree with you. Congratulations on sharing such a detailed post. Many thanks for sharing this. Have a super nice day.
Assignment help online Australia