One down, one big one left 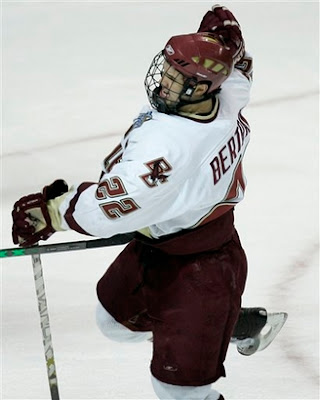 A nice controlled game became the Wild Wild West in the final minutes. When BC gave up the shorthanded goal behind the net, I thought the night was going to end badly. However, the team rallied and capped it off with an amazing 4-6 shorthanded goal. Great win. Now close the season out with a championship Saturday.

I don;t know if anyone else did the standard TiVo thing - (just the 2:30 no extra recording time). If you did like me, it went off the air with 4:30 to go and BC up 3 - 2. After uttering a collection of swear words - I go to ESPNews and watch the ticker and see 6 to 4?????? I'm thinkink there has to be a mistake or they forgot the overtime graphic or it was a shootout or something! I could kick myself for not putting in the extra 30 minutes of recording time! Never again (or at least not for Saturday night!) Great game, great win. Both excellent hockey teams.

Often you hear the of a goalie standing on his head to make saves, i think I saw it for the first time when Lameroix actually made a save on his back bythrowing his legs up amd barely catching the puck with a skate.

Typical BC athletics. Typical BC choke job. What an absolute meltdown. Did anyone expect anything else?

Bravesbill, you're right. Michigan St. should have rolled over for the BC hockey machine. Don't they know who we are? The game essentially finished 2-1. I'm hard pressed to call that a choke.

How can you not call that a choke? BC was easily the better team. They dominated the first period of play and really should have dominated the second period if it wasn't for all of those consecutive power plays in the middle of the period. And going into the last 10 minutes of play BC was winning the game. Then they made an egregious penalty and bone-head defensive play which allowed MSU to tie the score. After that BC tightened up and played not to lose which resulted in MSU controlling the puck in the BC defensive end for long periods of time. This lack of killer instinct and lack of offensive ambition in the final 10 minute contributed to MSU's break-away and eventual score in the final minute of play. The championship trophy was in their grasp. All they had to do was utilize their killer instict and grasp the trophy. But they didn't. They played tight and eventually lost. And you wonder why I'm so bitter about BC athletics. Every time a victory in a big game is within grasp, BC does something to choke the game away. You knew this would happen during the game but the question was : how would it happen. And it happened in this game in a brutal and unforgettable way.