Section Six and plenty of NC State fans accused me of reaching and intentionally trying to give this story more life than it deserved by hypothesizing that TOB and/or those connected with him were doing their part to bury this story.

I even said I would let it be after I posted the piece on Glasper’s impact. Now as conspiracy theories bloom, I am changing my mind. Yesterday on the ACC Now blog published by the News & Observer, Chip Alexander posted quotes from Glasper that seemed to retract and reframe some of his supposed animosity towards TOB. In the full blog post Alexander also teased a full article on the subject upcoming in Thursday’s edition of the News & Observer. Well Thursday’s paper and web stories came out and there is no TOB article. Even more curious, the original post from Alexander has been removed from the N&O blog. You can still see a partially cached version in the picture below. Unfortunately you cannot see the mention of Thursday's article, so I grabbed the Google results to show where he promised more detail. 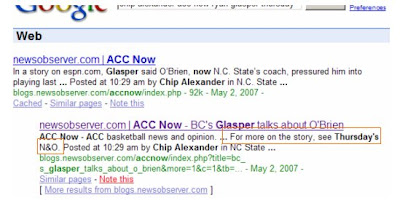 I can understand the article not making the paper. Things get bumped or delayed all the time. But there is no explanation for pulling the blog post, especially since Alexander had the most unique Glasper quotes. Why would they remove it? Let me speculate, but perhaps TOB and NC State want to put it all to rest and got heavy handed with the most malleable media available. It wouldn’t be the first time TOB (or any other coach) had done that. On a UNC message board there is unsupported speculation that John Swofford himself pressured the N&O to kill the story. That would make sense as it is in his interest that all ACC schools get along.

In order to find out for myself I called and emailed Chip Alexander. No response as of this post.

I am guilty of giving this more attention than it probably deserves, but it is the offseason and TOB has yet to say anything. If he just came out with his spin, this would probably die down…until September 8th.

Email ThisBlogThis!Share to TwitterShare to FacebookShare to Pinterest
Labels: Glasper vs. TOB

Good work on the story. Like many other stories, this one WOULD go away if it weren't so interesting and if there was SOME kind of response from TOB.

Btw, Section Six took down the "post your comments" for that particular blog article of his. Dangit, after a TOB apologist or two said we shouldn't be complaining after the 8,9,10 win seasons of the past 5 years, I posted the mediocre teams we faced in that time (Rutgers, Temple, Army, Cuse, UConn, Notre Dame, NC State, Wake Forest, etc) their records and the embarrassing losses (Cuse, Wake Forest). Also mentioned how many of those games were competitive late into the game.

Whatever, guess they'll just have to see for themselves the first time TOB blames his kids instead of himself and Bible.

Why care if TOB is a bigger loser than we already knew? He is a just good enough coach that also happens to be boring and puts himself first. Neither a new or unique story.

Someone at TOB's suggestion or doing it on their own to protect "whoever's interest" is also no surprise. It makes sense for no one, including BC, to talk about this story that will forever be incomplete.

Yes, I am way past tired of TOB. It is time to stop putting bullets in a corpse.

No, it's not. That might be true had O'Brien left to go coach in Washington. But he didn't. He left within the conference, and within our own division. We will see him every year--and if we lose to him, you might as well pencil in another Who the F Cares Bowl...so here's to hoping nobody has forgotten about anything by September 8th.

I hate that stupid ginger. There was a time when I thought he was decent man but a lousy game day coach. Now I just think he's a self serving pussy. I wish Glasper popped him in his big ass ginger head.