One step closer to the Frozen Four 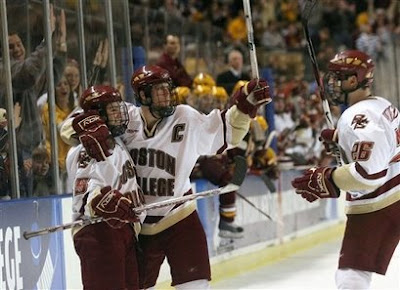 The team beat Minnesota tonight to advance to the regional final against Miami of Ohio Sunday. The win was Jerry York's 800th victory.

Strong performance overall, and of course it included a weird final few minutes due to a delayed replay. (Was I the only one convinced that things were going to fall apart once they put all that time back on the clock?) Despite the second chance given to the Gophers, BC held on and added another empty net goal.

If you have the time head back to Worcester Sunday and cheer on the Eagles.
Posted by ATL_eagle at 3/29/2008

Email ThisBlogThis!Share to TwitterShare to FacebookShare to Pinterest
Labels: BC Hockey

Hah- I was thinking the same thing, when they added that extra time, had this horrible flashback to the NCAA final last year and the late 3rd period meltdown...

That said, a great effort by the team: for the most part, they looked fast, crisp and aggressive. Bucci and Melrose kept returning to the pt. that BC "just looked hungier" on the ice- even picking BC in tomorrows matchup with Miami.

And another thing: you gotta like how this team continued to press even with the lead (5 forwards on the pwr play, etc.). Not to dwell on last years final, but they had that MSU game in hand, and by the 3rd period was simply playing "not to lose," rather than "to win" as they had done at the onset.

Tonight seemed like a far cry from that tentative style that doomed us a year back (perhaps that senior leadership?). That's how championships are won and Frozen Fours are reached.

Best of luck to the squad tomorrow.

Please never mention last year again, i still get choked up thinking about it - my roomate and i joke that the last two years the power went out and the natl. champ games never actually finished....good luck to the team tomorrow, i will be listening avidly on the internet

Great call by Bucci and Melrose. My one complaint was that Melrose continually referred to BC as "Boston." That's Boston U, buddy. Anyone that's played EA's NCAA March Madness knows this ...

As I'm sure everyone would expect, the stadium atmosphere was dominated by BC fans. It was so small, and probably helped by the acoustics, but when we scored it was louder than I have heard conte for any sports. I'll be back today...

Anyone know if this game will be available on ESPN360 like the game last night was? I'm guessing that if it's on ESPNU that means it won't be on 360 but just wondering if that was definitely the case.

Don't know if this has been posted yet, but CBS' risers and fallers on NFL draft prospects:

How is the game not on (WSBK)/traditional cable in the Boston area?

(At least steaming radio is available...)

What station is it on radio? This is completely pissing me off.

We were completely outplayed in overtime and yet we squeaked out the W.

I hope this year is the year, I don't think that I can handle heartbreak in Denver AGAIN......

Jerry York is the new Zen Master. Being completely dominated in OT, calls a timeout and we eek out a win.

I'll take any and all good karma: Denver? Gimme that.

Congrats on the 3rd straight Frozen Four. Let's hope the squad can regroup so we can dictate tempo v. WI/ND.

anyone know if the school will be distributing tix for non-students?

I hope the school finds a cheap way for students to get out there, because I just looked online and the cheapest flight is 400+, unlike going through some outsourced company like they did for the ACC championship game