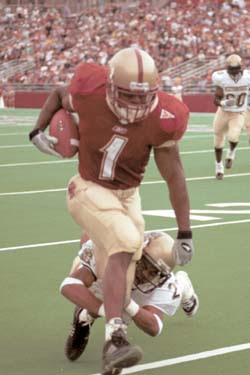 On Tuesday the NFL intelligentsia descends on Chestnut Hill to watch Matt Ryan workout. Peter King did a good job capturing the differing opinions on Ryan in his Monday Morning Quarterback column. The knock seems to be that Ryan has limited upside. Jags correctly puts it all in perspective:

"I'll tell you who [Ryan] is," Jagodzinski told me Friday. "Matt Hasselbeck. The way he carries himself, commands the huddle, competes, is hard on himself. He's got it all. All those teams talking about Matt [Ryan], saying, 'Yeah, but ...' would all line up to get Matt Hasselbeck right now."

Matt is continuing his diary for Fox. Important notes: he's working with fellow BC Guy Mike Kruczek and he likes Union Street in Newton Centre.

Ryan's near future is set. He is going in the first round and will get a chance to start in the NFL. A guy whose future is not as certain is former Eagle William Green. Green's Pro Day marks a return to Boston and an interesting twist -- since he's already been a first-round draft pick. He's trying to mount a comeback and claims to have his much troubled life in order. I wish him the best of luck and I am glad to see BC give him this chance.

Hi!
This is Nice Blog!

We offers ocr/data
capturing from various file formats and media to other. With our extensive technical expertise in this area, we are almost certain to cater to any of your complex conversion requirements, be it in any format, file types or media.