LBI Eagle took these two shots of the game. 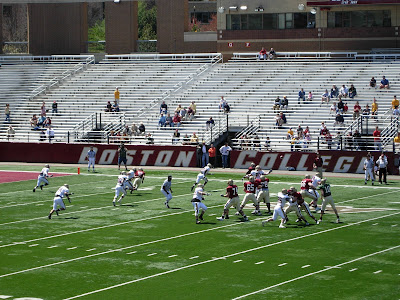 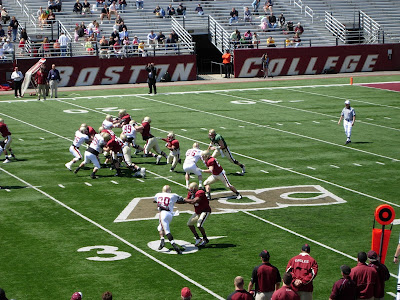 Mitch Albom takes a look at the Cherilus pick.

Former Eagle Daye Kaba announced he will transfer to Marist.

With the changes in their roster, Tampa Bay is considering using former Eagle Jeremy Trueblood at left tackle.

In a non-sports story, did anyone else know that BC has been keeping a Catholic school in Brighton afloat? Yet we are still not considered a good neighbor!

Here is another article, for those interested, on the relationship between BC and St Columbkilles

bc has been very involved with that school for a long time.
we used to go there all the time with coach maloney to talk to the kids

Though I'm disappointed that Dunbar, Silva and Callender didn't get drafted, I think BC fans have to be pretty happy with how the team was represented at the draft. Matty the first 1st round QB; Gos making it two Eagles in the top twenty. Pretty cool stuff, even Tribble getting drafted by a very successful franchise in San Diego. And Dunbar and Silva are both in good situations, I think. The Saints need tons of help on defense, so Jo-Lonn has a chance to make the roster, and the Colts love safeties who can hit and play with energy (see Bob Sanders).

Jaime Silva is going to take Bob Sanders under his wing...

Interesting.......I am a Games toys manufacturer supplier and looking for partners globally. If any one interest please contact me through this website.