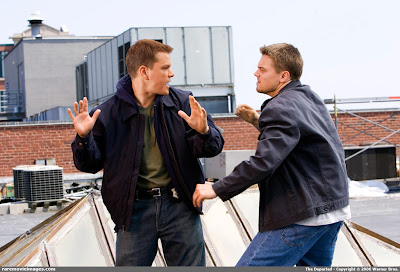 Since I am a little busy this week, the guys from BC Interruption have generously offered to help out over here. For those who haven't been paying attention, Brian and Jeff have borrowed Pardon the Interruption's format and tweaked it to fit BC sports and blogging. In this post, they use one of PTI's recurring gimmicks (good cop/bad cop) to debate some of the BC issues of the summer. I provided the "suspects" and cannot thank them enough for their help this week. Without further ado, here's BC Interruption.

Suspect #1: Preseason Magazines picking BC in the bottom of the Atlantic

Brian as good cop: I will reluctantly play the good cop on this one. In the 3 years since the ACC expanded to two divisions, no team has gone from first in their division one year to last the next year (you can thank Duke and NC State largely for keeping teams from achieving this). So why do I agree with these experts and think that BC will pull off this ignominious feat? Lack of offense. BC can no longer ride Matt Ryan's coattails en route to an 11 win season. There are too many questions on offense and special teams that I can't see this team scoring many points. And although BC hosts some of their tougher opponents at home next season - Clemson, Virginia Tech - they have to go on the road to play 3 of their 5 Atlantic opponents, including Wake Forest and Florida State in November. It's possible that BC loses all three of their ACC Atlantic Division road matchups.

Jeff as bad cop: Are you kidding me? These preseason magazines just don't get it. There is no way BC finishes last in our division even though we do play in the more competitive side of the ACC. BC goes on the road to play UNC, Wake, NC State and FSU. Don't even think about arguing that they won't win at least two of those. Then even if they do only win 1 home ACC game they still get to 3-5 and that is good enough to stay out of the cellar. But more realistically they beat Maryland and Georgia Tech at home to get to 4-4. Jeff's Preseason Atlantic division standings - 1) Clemson 2) Wake Forest 3) BC 4) FSU 5) Maryland 6) NC State.

Suspect #2: Tyrese Rice's ability to round out his game

Jeff as bad cop: I found it laughable that Tyrese Rice deciding to stay in school at the end of last season was newsworthy. I mean you don't leave school early to go play in Europe last I checked. Where is Rice going to play in the NBA? Point? I think if he were a little better point guard BC would've won a few more games last year. Shooting guard? Most NBA teams want shooting guards that can either shoot the 3 or have good size for the position. Rice shot the 3 well in one game last year - the UNC game and we all know his size is nothing special. I love to watch Rice play but I don't expect a future NBA star out of him nor do I expect him to last on any postseason award watch lists for long next year.

Brian as good cop: Tyrese Rice will round out his game during his senior year. He'll have more weapons to distribute the ball to which will help his assist total. Rakim Sanders should be more polished after an up-and-down freshman campaign. Add 6'8" Vermont transfer Joe Trapani to the backcourt with Josh Southern, as well as incoming freshmen Reggie Jackson, Evan Ravenel, and Dallas Elmore, Rice should have plenty of young, talented players to work with and distribute the ball. The one question going into next season will be can Rice step up and be the vocal leader of this team. With some help from Skinner and the young players, I expect Rice and the Eagles to win a few more games than last season and for Rice to be in the conversation as a late second round NBA draft pick.

Suspect #3: BC returning to the Frozen Four

Brian as good cop: This suspect is an easy one to play the good cop. BC is going back to the Frozen Four next season. BC only has to replace 6 players (5 seniors and Nate Gerbe) from last season's National championship roster, and they'll easily fill those holes with the return of a healthy Brock Bradford and the nation's #1 ranked recruiting class. Plus don't forget that Boston College's netminder John Muse is only going into his sophomore season. Winning the National championship as a freshman is a huge confidence boost and I expect BC to come out of the gate much stronger than they did last season.

Jeff as bad cop: HELLO! They have to replace Gerbe. They're done. What happened the year after Gionta? No frozen four. Also, the team this year got hot late in order to make it to the frozen four. Wasn't there an OT game against Miami in there? And if BC hadn't beaten UNH in OT in the Hockey East tournament I doubt that they would have ever gone on that postseason run to the national championship. BC was a couple of bad bounces away from no HE Championship, no National Championship and no Frozen Four and next year will be missing their passionate star and therefore will not repeat.

Suspect #4: BC football fans who get married during football season

Jeff as bad cop: If you attended BC and still have friends from BC, why would you possibly get married during football season? Wedding dates are typically set at least a year out and at that point the schedule is not even available. Even if you plan more last minute you still don't know game times until the week prior to the game. Weddings in the fall are just out of the question. How would you like to be the bride at a wedding reception where all the guys in attendance have retreated to their hotel rooms to watch a BC football game? Or at best just hang out in front of the bar by the TV? It would ruin your special day and there is no way to be certain whether or not the game will be on during your reception in advance and what its importance will be. My girlfriend and I had this conversation long before marriage became something even on our radar screen. It was a no brainer that we would get married sometime other than football season or March Madness. We want our day to be special and why ruin it with something as avoidable as the 15 weeks of college football.

Brian as good cop: Yes, I am getting married next fall. Here's the thing: girls dream about when, where and how their wedding will go down for as far back as they can remember. Guys don't dream about such things, they dream about their sports teams winning World Series and Super Bowls. My bride-to-be wants to get married in the fall so there's a little thing about marriage and relationships we like to call compromise. We do have some things going for us: the wedding will be in California so most likely the game will be an early start out West and we can incorporate the game into the day's festivities (she is also a big fan of BC football - we actually met randomly at the 2004 BC v. Penn State home opener - so she is supportive of incorporating the game into the weekend's activities). Very few of our college friends even live in Boston anymore, so it's not like there will be this massive conflict of interest. Read: no one is going to attend a BC football game over going to my wedding. Let's be honest though, it's one day in your entire life where Boston College football can take a backseat to more important things in life. I've attended my fair share of BC football games, especially last year, and can take a BYE week off every now and then.
Posted by ATL_eagle at 7/02/2008

OK, I don't get this one part.


GETTING MARRIED IN FOOTBALL SEASON!?!

Are you nuts man?

I don't really blame you for getting married whenever the woman wants (let's face it - you would be made miserable if you didn't), plus since your wife is into BC football as well you can actually enjoy it fully and not annoy her!

As for the Frozen Four, I am VERY confident we will make it back. While it does stink to lose Gerbe, every year I was at BC we lost our top scorer and someone would step up unexpectedly (e.g. Chris Collins). I think losing Brennan hurts alot too, but with Sneep, Petrecki, Muse & Co. back I say we have the best D in the country and a very good O

If she dreams of getting married in the fall, that's fine...set it for the last weekend of September. That's parent's weekend every year at BC, which means a pushover opponent. You'll miss a game, but you know it won't be an important one.

Also--a returning Bradford should be able to replace most of Gerbe's production. Guys like Cam Atkinson and Jimmy Hayes can replace the rest. Also, the defense should be improved (losing Brennan will hurt, but everyone else is a year older and Tommy Cross--who should step right in for Brennan--is an absolute stud).

bc is absolutely going back to the frozen four next year. hockey east is nearly guaranteed at least one of the spots, and our biggest threat next year is probably BU, but they just lost their goalie. plus are you going to listen to someone who lives in south carolina analyze college hockey?

and jeff is in my wedding party, but if he has to stay home to watch us beat down on kent state, duke or hofstra, his choice. just sayin

Ok, I'm pretty sure I will be watching the game--- And I'm the Maid of Honor!!! :) And not even a BC Grad. Priorities, B! Of course, knowing the fiance, I know it's totally not your call buddy.

"What happened the year after Gionta? No frozen four."

Losing 5 seniors plus Gerbe is not insurmountable, especially with the returning talent. The 2001-2002 team lost 11 players (more than half the squad) in the offseason -- 8 graduating seniors plus Orpik/Kolanos/Kobasew going pro.

Plus, the 2001-'02 team only had 2 seniors on the roster (Giuliano and Dolinar), 4 juniors, 7 sophomores and 10 freshmen. That team was ridiculously young.

With all the returning talent, this team is definitely poised to make another run.

Hey, as a double Eagle, married to another double Eagle, both of whom were four year members of the BC Marching Band and didn't miss a single home game for 4 years each, and who got married the day of the FSU game last season, some things just need to take precedence over BC football. Mind you, that list is VERY small...

I contend that BC should have consulted us before setting the schedule, as our wedding day had to be booked first!