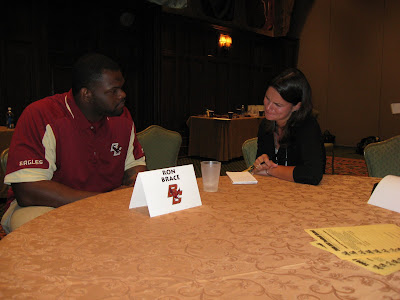 In part two of my exchange I get into one of my sticking points -- the national media perception of BC sports. I also threw some short quick hitters. See what she says about TOB and her blog below.

ATLeagle: BC fans tend to get frustrated with the national media’s assumption that we’ll never be more than we are. In BC’s recent history I think both head coaches have used the media a bit to lower and reset expectations. From my vantage point I try to challenge that lowering of expectations (and only have to point to what Jim Grobe has done at Wake as huge example). Having observed BC from the Maryland beat and now as the ACC blogger, what do you think expectations should be for the program under normal circumstances (i.e. not in a season where there is a new coach, no QB and an All American battling cancer)?


Heather Dinich: Well, considering I started covering the ACC/Maryland/BC during the Matt Ryan era, I’ve been nothing but impressed with what they’ve done, but the fact of the matter is BC does not usually recruit the same caliber athletes programs like Florida State and Miami does. Nor does Wake Forest, as you pointed out. But Boston College does get blue-collar players who just LOVE the game of football and play every single snap with heart. With that said, under normal circumstances, I think the expectations for Boston College should be to win the Atlantic Division and the ACC title. They’ve already proven capable of that, but now have to take the next step and win that championship game. Heading into last season, I didn’t think they could do that, and my reasoning for that was, if they couldn’t do it WITH Matt Ryan, how on earth will they do it without him?

-- Do you see a division realignment in the next five years?


HD: No, not in the next five years. The current schedule is set through 2015, so if anything were to happen, I’d imagine it would happen after that to be fair to all of the teams.

ATLeagle: Do you think Charlotte will draw more than 50,000 when they host the ACCCG?


HD: Ooh, that’s a good question. Obviously a large part of the answer depends upon who is in it. If one of the Carolina schools is in it – which is a very good possibility, then definitely. I think the chances for that kind of crowd are definitely better, though, in Charlotte (unless, of course, FSU and Miami are playing in Tampa).

ATLeagle: Do you still think BC will be in a bowl game?

HD: Sigh. No. Not with all of the unfortunate offseason news they’ve been dealt.

ATLeagle: Will TOB get to a BCS game before he retires?

ATLeagle: Finally, what can people expect from your space this year?

She believes in recruiting rankings. Typical.

Charlie Davies came on late for the US in world cup qualifier vs Costa Rica last night. The USA did not look good at all but Davies looked very good and brought a ton of energy, which the team was lacking. He had some nice runs and made some things happen in and around Costa Rica's 18 yd box and battled to the end. Too bad he had not been in earlier. Nice for BC to have a player making an impact at the highest level.

TOB getting to a BCS bowl? Right.

Lets not sugarcoat it. Women or not she offers very little insight into BC football. In fact I cannot remember one time reading her posts where I have been impressed. Based on these interviews, it seems little will change. Has she not learned anything from recruiting rankings? BC and Wake have been the top of the line the last few years and have been at the bottom of the recuriting rankings for the ACC. I do not care if she is a woman. I cannot give her a pass on her incompetence.

"It is anchorMAN, not anchorLADY!" No, seriously, this sounds like me trying to cover the Isreal/Palestine conflict. I could write columns repeating every conventional thing that people say, but that doesn't make it insightful.

I would never find a better place to read as good comments as this site, never seen before, easy to find easy to understand, and it have serious comments not sick jokes as others, thanks and please keep like this. I would be pretty pleased if you as I do go to my links and maybe post a comment about what you think of mine. Great investment opportunity at lots in Costa Rica

I don't know why they get stress about it if they know that they are great players. Generic Viagra