Decade in Review: Ten "We are BC" moments

This is another look back at this momentous decade in BC sports. The following are not necessarily historically important or even real moments per se. What I tried to capture here were 10 moments that were unique to the BC experience and made us laugh, cry, smile, yell or whatever else. The theme is that these are only things a real BC fan can relate to. (This category is wide open so leave your suggestion below.) 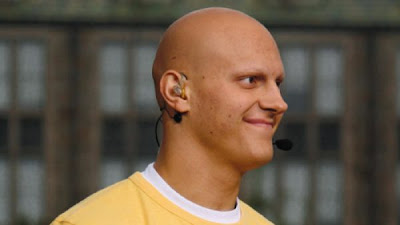 1. Mark Herzlich’s battle with cancer
I specifically avoided putting Mark’s battle with cancer in either the best or worst moments. As I said when the news first broke, it was so overwhelming that it couldn’t simply be categorized as bad or worst. His valiant fight back, the people he inspired and the joy he brought to BC cannot be captured by the term “best.” Finally putting Mark on any list seems premature. Thankfully his story is not over and his future is bright. 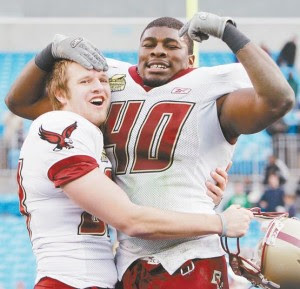 2. Superfan to kicker (the Steve Aponavicius story)
He’s been around so long and his story has been rehashed so many times that I think we forget how goofy, remarkable and fortunate this whole series of events were. A kid sitting in the stands with body paint and a sombrero stepped out onto the field and eventually became our all-time leading scorer. It is a Disney story, only true. Sure there were plenty of times we could have used a better leg, but Steve worked hard and got better every year. When you think back to this past ten years, Sid Vicious will be one of the first things that comes to mind. 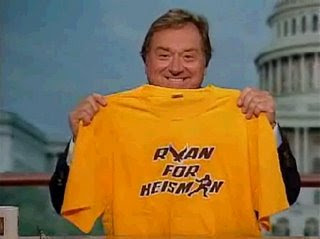 3. Celebrity fan Tim Russert
I don’t know if this happens at every school, but being BC parent can suck you into BC sports within one season. No one served as a better example of that than Tim Russert. He was our highest profile fan and became legendary around campus for his passion, friendliness and sense of humor. The BC portion of Russert’s identity was only a fraction of who he is or what he meant, but I think BC fans will always hold it dear. Because, at the end of the day, it was something we could all relate to and at its roots, was just about a father and son bonding over sports. 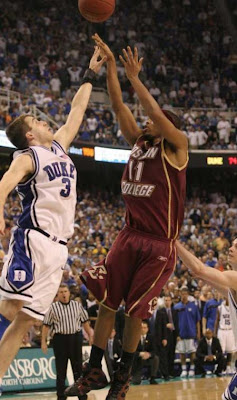 4. The Duke scuffles
Despite the first three items on this list, the decade was not all smiles and soft light. We also had some moments of toughness that made me proud. I am not big on moral victories, but two separate incidents with Duke basketball still put a smile on my face. The first happened early in the decade. Duke handed the 2001 team its first loss of the season and late in the game Duke guard Jason Williams taunted us with some ball fakes. Not one to be trifled with, Kenny Walls body checked Williams into the scorer's table. Of course holier than thou Coach K labeled BC players thugs. Fast forward to the 2006 ACC Championship game…BC and Duke are in an epic back and forth, when floor slapper Greg Paulus “inadvertently” threw a punch at Louis Hinnant. Like Walls, Hinnant didn’t take shit from anyone and promptly shoved Paulus back. Both got technicals and Hinnant played the half of his life after that. BC came up short, but I was proud.


5. The BC offensive line destroys UVA after Brad Butler’s cheap shot on Kiwi.
In thinking about this incident, I am amazed this story wasn’t bigger. Think of the press that this year’s punch in the Boise State-Oregon game received. But that is not why it is on the list. After the smoke cleared and Kiwi was hurt and Washington was ejected, and BC buckled down and ran over Virginia. The offensive line in particular played inspired football and won one for Kiwi.

6. BC-Notre Dame on First Take
The rivalry has been rehashed a million times. We know we dominated on the field, but I still smile when thinking about this dominant performance by then BC student Jeff Weinstein on First Take. Jeff handled himself with class and the ND kid looked like an arrogant blowhard.

7. Italics Numbers and the Angry Chicken Logo
This decade saw BC provide a much needed refresh to our logo and uniforms. Instead of a classic look or a new cool design, we got italicized letters and numbers and the Angry Chicken logo. We also got ten different shades of maroon and gold. We are finally moving on from Reebok to Under Armour. Let’s hope we take off the italics so I can tell the difference between a 6 or 5 on a uniform.

8. BC and Texas play the longest college baseball game in history
The only BC baseball those of us outside of New England get to see is the game against the Red Sox in Spring Training. So I didn’t want to pass up the opportunity to watch online as the boys take on Texas in the NCAA tournament last spring. Little did I know that I was about to witness the longest game in college baseball history. BC lost, but it was such a unique game and unique experience (there was a whole group of us posting on message boards all through the night), that I will never forget it.

9. BC on Youtube
Online video predates the ‘00s, but Youtube and its competitors made it so easy to post and view that it really changed the dynamic of being a sports fan. There are a million funny and cool BC clips online, but here are some of my favorites.


10. BC-Clemson lovefest
The move to the ACC wasn’t about rivalries. It was about money. But the bond BC and Clemson formed early is one of the more pleasant surprises of our new home. The football series saw four classic games and this year’s bizarre triple rain delay. Every other year the Orange clad Clemson fans invade Boston and seem to enjoy every minute. Every other year more and more BC fans make the trip down to Death Valley to experience real tailgating and their big time game day environment. When Clarence Megwa snapped his leg and was hospitalized with a coma, Tiger fans sent him hundreds of letters wishing him well. We won’t ever replace Notre Dame and South Carolina as true rivals, but I think what we have is better…in a way. It is based on respect and hospitality and fun. Who would have predicted?

Email ThisBlogThis!Share to TwitterShare to FacebookShare to Pinterest
Labels: bc vs notre dame, best of the decade, Kiwinuka, Tim Russert, Video

Anonymous said...
This comment has been removed by a blog administrator.
12:24 AM

This might be your best blog entry yet, which is truly saying something.

Most gave me goosebumps.

I feel as if I opened something under the tree early...great stuff, Bill...thank you.

The one on your list that really resonated was the cheap shot on Kiwi. I remember watching that play develop from the back row of the marching band. I completely forgot that the game was tied because it felt completely out of reach at the time. What I do remember is seeing Al Washington flying through the air (the video doesn't do it justice, not at all) and body-slamming Butler. That Butler was only suspended one game was a grave injustice. The come-back in that game was part of a great run that included the OT win at Clemson and the rainy win at home against a very good Wake team. Washington's body-slam was totally justified and one of the moments that really cemented my status as a member of the BC family.

Loved this entry. Remember most of it well. My son graduated in May and we are fans forever. We were at a mall in New Jersey this week and in one hour 3 people came up to us to talk about BC because of my son's t-shirt. Merry Christmas to all and a Happy and Healthy New Year! Go Eagles!

Jeff ah, ah, um, ah, couldn't put a, ah, um, sentence together.
If anything, that should have been, ah, um, ah, um on the worst of the decades list.
Hopefully, next time BC can have a student rep who doesn't emulate Senator Kennedy's manner of speech on ESPN.

While it is a relatively unimportant topic, that Angry Chicken head logo of ours has got to go! I love the new one that has sort of replaced it which is featured on the sleeves of the jerseys. Whenever I see that chicken head, I can't help but think of it perched atop TOBs head every game.

Goberry, you're nuts. Jeff did a great job and came off like a real guy.

Jeff did a great job. Let's see how you would have done on national TV as a college senior. Plus he was smart enough not to play ESPN's games.

ATL,
But what about when the men's soccer team...

Also, I always liked this "Ignatius Started the Fire" video. They played it at a few sporting events in 2005 and people got a kick out of it:

The UVA cheap shot still gets me all riled up...

A very Merry Christmas to ATL and my fellow bloggsters! 'tis the season to be jolly.

Jeff did a great job on First Take. Made the ND guy look like a total loser.

Great post ATL. I like the fact that you went away from the all cheery theme to include the Duke scuffles and Butler cheap shot. Loved how our teams reacted to those moments and stepped up to the occasion. I was at the Paulus-Hinnant game and I was so proud of our team in that game even with the loss.

I think the Youtube videos on MattRyan for heisman are the best produced on the web!

I liked this one a lot. If you are a true BC fan, then you definitely remember these moments both good and bad.

I really liked the Duke games and UVA cheap shot mentions. We lost that ACC title game by 1 point and Duke needed the refs help.

Also, the ESPN First take was a classic, the kid from ND came off looking bad, and fell for every trick, way to go Jeff.

Merry Christmas to all, WE ARE BC!

I always enjoyed this "Real Men of Genius" Notre Dame "commercial" from youtube.

Great post Bill. Makes me realize why I can suffer through Harvard and URI losses. Best, Worst, We are BC, all these moments feel so personal, not sure if it is the same at all the big state schools.

ATL--Beautiful way to end the the last ten years of a great BC era. Very moving Pix 'n Picks. Thanks for all your efforts in providing key moments from the Heights of Chestnut Hill that deserve our respect and Ignatian reflection. Fr. Francis Sweeney, S.J. would have loved this blog. WE.ARE.BC. Merry Christmas 2009!
Go EAGLES! Beat USC!

Great recaps of what I would argue is the best decade in BC sports history. Here's hoping even better days are ahead for our great university!

The italicized numbers, unfortunately, are here to stay.

I echo the sentiments of many others here in saying that I love this series of posts. Keep up the good work.

Am I the only one who actually likes the Angry Chicken logo? With Eagles being the most common nickname amongst NCAA schools, I thought this was more unique and identifying than the fairly standard "soaring eagle."