Our secondary is now like a Country song...and other links 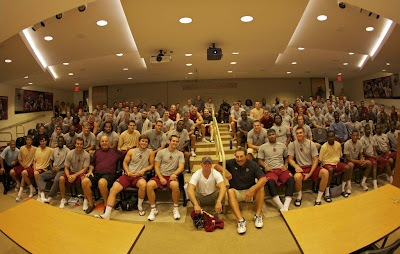 I am not a Country Music fan, but the guys on the team seemed to enjoy Kenny Chesney's surprise visit. Chesney is playing at Foxboro, so Gene was able to coordinate a visit while Kenny was around. If anything, the visit hopefully took the team's mind off our shrinking depth at Defensive Back. The latest to leave is SR Safety Dominick LeGrande. Because he played a variety of position during his time at BC, I don't think the majority appreciate his play. I always liked LeGrande, yet I don't think it kills us. As I've said, playing in BC's defensive secondary, you need to be able to tackle and read the opposing QB. Siravo seems to coach the position well too, so don't lose sleep over this year's DBS. The bigger issue though remains why is LeGrande leaving now? We won't get a straight answer and it is never that simple.


In soccer, BC beat George Mason 3-2. The next men's game was postponed due to Hurricane Irene. The women's team beat Rutgers 1-0.


NFL Scouts already know which BC players they should target.


BC likes recruit Dayvon Williams, but has yet to offer him as a QB.

DB's are going to be fine

The Boston Globe of this morning through Blaudshun has some interaction with Spaziani. He stated that these two were subs for injuries and were not progressing and therefore had to go for the "good of the team". It was stated that he felt LeGrande had an attitude and that LeGrande left on his own. There is no doubt that there is a "complexion" perception here. This would have been great in June. However in late August, there are some ethical issues involved on the "use of live ammo" in training sessions. Semper Fi.

LeGrande is best friends with Okuroha, so no one should be too surprised. Can't look back now! Bring on Northwestern...

Tackling and reading the QB. Oh, those things are easy. I'm sure experience, physical maturity and confidence don't matter to in safety play at all.....