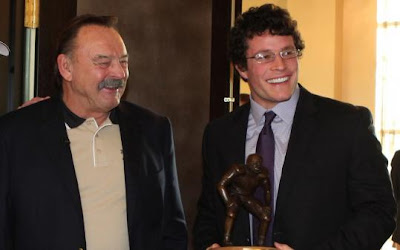 It's not every day that a Trophy's namesake flies to Needham to attend a team banquet, but that's what happened Sunday. In an unusual and surprise move Dick Butkus handed Luke Kuechly the 2011 Dick Butkus Award for being the nation's best college linebacker. It is an individual award and certainly doesn't replace a bowl trip, but I think it was a nice way for the team to end its season.

Any one from BC ever won this award before?

(p.s., I think Butkus can still kick butt, including Luke's)

Luke is the best linebacker in BC history! And there have been some greats - Cronan,Romonowski,Boyd, DeOssie, Dunbar, Herzlich, and I'm sure I am forgetting others. But, Luke is the all-time best! Congratulations and thanks for making us proud!