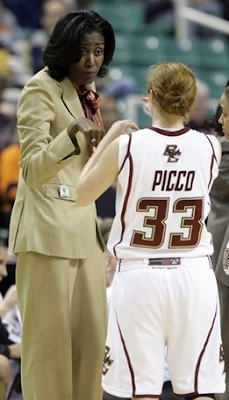 Sylvia Crawley resigned this afternoon as head coach of the BC women's basketball team. The official release from the school listed "health reasons" as the basis for her decision. As in the past, the school then felt the need to explain that these health issues are "non-life-threatening, treatable condition..." I hate being the constant cynic, but I think the change was made because Crawley wasn't a very good coach. A 67-63 record (20-38 ACC) capped off by this year's 7-23 season was enough to do anyone in.

None of this is a surprise. I predicted Crawley would be gone in December. Following Cathy Inglese would have been tough for anyone, but Crawley seemed like a bad fit from the start. She's wasn't particularly good at the Xs and Os and her supposed forte -- recruiting -- resulted in highly-rated recruits, but lots of turnover, transfers and losing. She didn't ingrain herself into BC and carried herself at practices and games like she didn't want to be there. I know she has other interests outside of basketball. Maybe she can now focus on them.

Because very few are paying attention, this story won't be a big deal nor will it get the scrutiny it deserves. But our current women's basketball situation was the canary in the coal mine. In 2008 a successful and well-regarded coach was forced out. There was no fireable offense. It was more about power and differing philosophies with her boss. BC filled the role with someone who was not qualified and not cut out to be a head coach in the ACC. Now we have to clean up that mess and are certainly worse off than we were four years ago.

I hope this is a sign that despite public proclamations, Gene is willing to correct his mistakes. Because I can see this football season playing out a lot like this year's women's basketball season.

Email ThisBlogThis!Share to TwitterShare to FacebookShare to Pinterest
Labels: Coach Flip is running the show, Crawley

Do they really think we still buy the "health reasons" bit? Come on.

That's two coaches who were forced to resigned due to "health issues." Maybe there is a mold or asbestos problem in Conte. Given the situation, it might not be a bad idea to test GDF for health problems.

Translation: fired and we refuse to tell you why, but are happy to lie to your face.

I once had occasion to attend a dinner where Crawley was the speaker. She was quite impressive as a speaker and appeared to be really devoted to her players. Too bad it did not work out.

Ry - thanks for the scoop. Wow. That is bad news

Does Spaz push too hard during practice? Lot of injuries in practice

BC has a commitment from Nicole Boudreau of Andover High School. She's the 2x Gatorade Player of the Year in MA. They are undefeated, just won the E-Mass championship and are playing for the D1 state title this weekend.
Hopefully this doesn't affect her decision. I'd assume most girls basketball players who commit to BC do so to choose the school, not the coach.

I, too, was a fan of Crawley but it just didn't work out. BC has the potential to be very good in WBB. Great academic school, very little competition for New England recruits who aren't the top top top notch (who will automatically go to UConn anyway), participation in the best WBB conference.

Standard operating procedure for BC sports seems to tell a lie. From Rogers health problems to Cawlery's to the vicious racial smear against Skinner to the vile campaign against Lively.Gdf is not operating in BC's best interest . He is trying to stifle legitimate debate about the coaches. It is bad enough to be dishonest on your own but to force silence on ex coaches is unpardonable. Sunligt is the best disenfectant.2. It is a sad commentary on Fr. Leahy that he is incapable of assessing how corrupt and false Gdf is. When he fired Jim O'Brien, the incompetent failure, 16 years ago he had it right. Gdf and JOB are made of the same stuff.( The Wrong Stuff) 3. How will Gdf who has never hired a good coach pick one now?

A few years ago BC had a young alumni function in Georgetown around the Hockey Frozen Four. Two very impressive basketball alums were there and said left to avoid a major public relations problem over how she handles certan girls. The captains brought the problem to Gene (confirmed byrecent alums) and they made it clear they expected him to make change. It was the right move