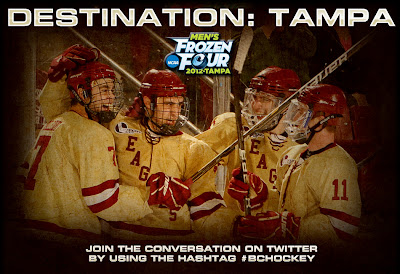 BC put up the above image shortly after BC wrapped up its 4-0 win over Minnesota Duluth. I guess I shouldn't be surprised by their well-timed marketing as we are becoming old pros at the Frozen Four. This is our 10th Frozen Four in 15 years. We obviously want and expect to win it all, but I think we need to pause for a moment and recognized Jerry York's greatness. Despite the roster turnover, despite replacing incredible goalies, York produces the sports best team's every year.

As for this game, BC controlled the pace early. We didn't score but had some good opportunities. After BC scored in the second, the game got a little chippy. But BC's power play and penalty kill were both very good. Coming off this run, I would think BC is the heavy favorite to win it all. Let's go Eagles!

BC takes on Minnesota in the late game Thursday.

Huge team win, probably BC's best effort of the year. No quit in the other guys who came back against Maine but Milner stoned them in the third when they had some great chances, including a breakaway.
See you in Tamps. This looks like a good site for tickets if you can't get them through BCAA.http://www.primesport.com/Event/Details/560582

Milner was utterly unflappable last night. My seat was ideal for focusing on him for two periods and it seemed like the game was in slow motion to him; he was so calm and just perfectly positioned all night. The BC defense was smothering for 60 minutes, especially on the penalty kills, which included about 40 seconds (I think) of 5 on 3. UMD was good, but couldn't match up with BC's depth. No matter who was on the ice for the Eagles, their level of play -- in positioning, intensity, execution -- remained the same. Just a remarkable performance.

It's a shame that there weren't more than about 150 students at the game and only a few thousand people in total. BC's marketing may be great at refreshing the web site (where they also excel at selling ad space and merchandise), but they can't sell tickets to save their ass.

mod10-
Can't blame BC for low attendance. Tickets are outrageously expensive: fifty bucks for one college hockey game. (In 2001 when they were $20 each, we packed the joint). Also it's 8:00 pm on a Sunday night... in Worcester. If you have school-aged kids, forget it. Actually, forget kids, if you have a job on Monday morning, you probably don't want to get home past midnight on Sunday night.

Blame the NCAA for bad ticket and scheduling policies.

Blame ESPN, not the NCAA. This is a good article about how the NCAA is being held hostage by its TV deal with the Worldwide Leader.

I was planning on going till I realized the game was at 8:00 pm. That means not getting back home till probably midnight on a Sunday night, so I passed. Im sure a lot of people made the same decision. If this game is in the afternoon, BC has a much, much bigger crowd there.

Jim Connelly is 100% correct. How brilliant was Gladchuk in hiring Jerry York?

Minnesota is going to be a tough draw. Our gang is on a roll, so I hope they can get the win and return to the championship game.

Gladchuk hired Mike Milbury. Milbury left after one day bbecause Gladchuk lied to him about the scholarship situation. Gladchuk then settled for Jerry York.