Ron Brace took to Facebook today to vent his feelings on BC Football. It sparked a long series of comments and pointed criticism of Spaz. Other young football alumni weighed in too. With Ron's permission, I have posted screen shots of the exchanges. 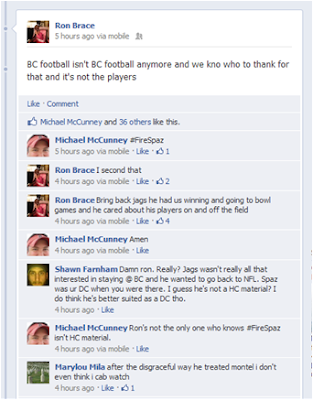 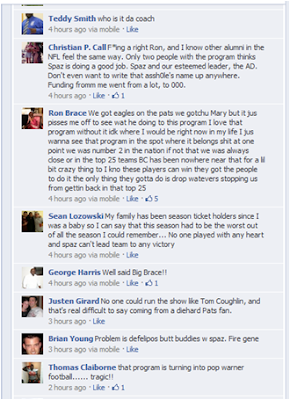 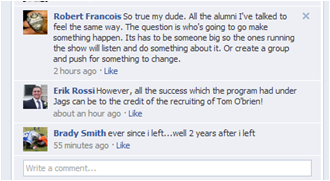 Many think the fan criticism of Spaz is unfair and excessive. But you really have to worry when guys who played under Spaz are so vocal. BC and Gene rationalized and justified the Spaz hire because of the love and respect he had from the players. It didn't ring true then and now guys like Brace -- An All ACC player and Second Round Draft pick -- are defending Jags and slamming Spaz.

Brace doesn't speak for all football alumni nor the current players. Who knows? Perhaps the new assistants are bringing a new attitude and new energy to the team. My guess is they're not and many current players have checked out on their head coach. College Football is a tough, emotional sport. To succeed you need player buy-in and guys going in the same direction. I don't think we have that under Spaz. The Hot Seat is going to be scorching come Fall.

and the snowball picks up speed...

I mean, really, how long does the product that is BC football need to continue to devalue itself?

You go from a #2 ranking in week 9 of the season to the gutter pig of the NCAA in a few short years. Hell, the BC leadership isn't even focused on turning this crapshow around as much as they are worried about putting lipstick on the pig.

25 year ticketholder, by the way, who no longer jumps through hoops to juggle getting to games.

Gene D, is like the guy who sends Rambo into 'Nam to rescue POW's and then leaves him there to fend for himself while he worries about covering his ass. That's us...the BC supporters...only difference is Rambo was armed...and 'roided up.

PUT SOME PRIDE BACK IN MY PROGRAM!!!!!

Interesting that one of the former players said "who is going to make that happen. It has to be someone big." That someone is Sir Douglas Flutie, Earl of Natick. BC's lone Heisman winner, former NFL player, and one of BC's biggest fans. The best player to ever put on a BC uniform. He could advocate for change and help bring back glory to the Heights. We have not been great since that '84 team, but BC has been very good under Coughlin, O'Brien and Jags. And right now, very good would seem pretty awesome.

I'm not ready for Flutie for HC. I'll take him as AD, though, in a heart beat.

Flutie would never be HC or AD - not that I wouldn't accept him in that roll - but with his commitment to his family, particularly his son, he couldn't invest all the time in the program(s) that it requires. I don't think he'd let himself go down that path. He can be the voice that says to Fr. Leahy, "Make changes, or stop expecting me to promote the school and program." I'd like to see the spin about "health concerns" that they put on him...

Although now published in the open (nice job ATL), this is still just FB chatter. I hope these sorts of influential former BC stars start talking more openly, publicly about the problem of Spaz and GDF.

I hope they are already talking to BOT types

But still, it is such an obvious problem, it cannot have gone unnoticed. Obviously, it has gone unaddressed. I always wonder if the whole Spaz saga is really part of BC being cheap , just like it was with TOB (Spaz is the lowest paid coach in the FBS). Or is it some Jesuit strand of anti-big-time-sports-money thing?

As we all know, the Catholic Church and its major institutions are notoriously unresponsive and non-communicative with the "flock." (members, constituents) As GDF said, fan complaints 'just do not matter' (something like that).

Does any of the complaining really matter? Will it change a thing? Who knows

Mod34b,
Maybe this is an overreaction. Am I reading a post on a pro-Boston College website that is attacking the Catholic Church/Jesuit Order? Your comment about the Church/Jesuit Order is ridiculous. Do you know any large instiution that makes changes quickly? Do you know of any University that makes changes quickly? Both institutions like the Catholic Church and University's are known as being the slowest to make changes.

I argure that Father Leahy(a representative of both a large multinational institution and a University) gave Gene a long leash to make personell decisions. Gene has failed in almost all of his coahing personell decisions. As a result, especially with regards to football I firmly believe that Father Leahy has shortened the leash with Gene. As a result, we the football faithful will be following a team with a substandard coach. This is not because of the Church or the Jesuit Order. It is because of the negative track record of the Athletic Director in his hiring practices and Father Leahy cutting the losses of the Athletic Director.

Knucklehead, it is not so much a criticism of the church as stating a well known fact. My comment is neither ridiculous nor an attack. Just stating a fact.

In any event, Respectful criticism of the Church and/or BC is certainly allowed .

Notre Dame makes changes quickly. They're a large and Catholic institution that demands excellence. Next...

Was firing Tyrone Willingham a quick decision? No.

Was firing Bob Davie a quick decision? No.

Both were at Notre Dame two years longer than alumni and fans wanted them to be.

I am assuming that is what you are referring to. Otherwise the comment was baseless.

"Respectful criticism of the Church and/or BC" is an oxymoron, MORON!!! You cannot criticize true stewards of all that is right in Boston College athletics by criticizing Coaches DeFilippo and Spaziani.

For troublemakers like Brace and Claiborne to go further and claim Jagodzinski cared about the players...well, that goes against all the strenuous public relations work that salvaged BC football's reputation by trashing Jagodzinski.

How are we supposed to make people believe a dude with a name like "Montel" must have been kicked off for using drugs, if Jagodzinski disciples are going public with criticism of Coaches DeFilippo and Spaziani? You have to show some loyalty to the program, Brace, Claiborne, Tennant, etc. Let the whispers go out there about Montel and supposed associations he had. We can say we respect Montel's privacy, knowing people will think it must be Montel's fault (with a name like that) rather than the coaches'. But that doesn't work so well if recent players are stabbing the coaches in the back like this.

BC was on track for a Top-20 recruiting class, but Brace just cost it 70 slots last night. Judas.

In response to "Observer College" as a Navy vet, I can say that Brace and Claiborne earned the right to criticize by being on the field of battle. From the name that you go by, I would say that you fought your war up in the penthouse.

And OC claims yet another victim

CatabEagle said...
This comment has been removed by the author.
10:58 AM

Thomas,
Your original comment was baseless. I gave you an argument. My assumption was that you were referring to the coaching changes in your original baseless comment. It was pointless divel.

All three of those coaches were given 3-5 years to improve the program. That is alot of time when Notre Dame alumni and donors and clamouring for a winner.

So Notre Dame the large Catholic institution did not make quick changes with the coaches.

Bravesbill,
I did not people cannot criticize the Jesuit order. I said that to blame the Jesuit order for the fact that Spaziani is the coach is wrong. It is Gene D's inability to hire a talented head coach.

Work on your reading comprehension.

there is no more telling indictment of a coach than former players who were coached by spaz saying spaz doesn't care about BC's players on or off the field and calling for change. off the top of my head i can think of probably 10 ex-players now that have commented (either on facebook, twitter, or in talking with them directly) that spaz isn't the right guy for the job, that he can't motivate, that he doesn't care about players off the field, that he doesn't prepare the team for success. the results on the field aren't there; now we get numerous players who have experience with the man saying he's not the guy.

i will plod ahead on the Big Jack Crack road of optimism and hope for the best this season, and plan on going to at least two games. but i just have a bad feeling that we are going to have another sub-500 season chock full of spaz and geno excuses.

"Many think the fan criticism of Spaz is unfair and excessive. But you really have to worry when guys who played under Spaz are so vocal."

Spaz was a great coordinator, but even his own former players are against him now. It's so obvious he can't cut it as a head coach. He should retire.

Great post. This article is really very interesting and informative. Thanks for your nice post.
football news