Under Armour overlooking BC in new t-shirt rollout

I hoped that when BC signed with Under Armour that it would mean more aggressive merchandising and licensing. Based on Under Armour's own website, BC is either old news or undesired. 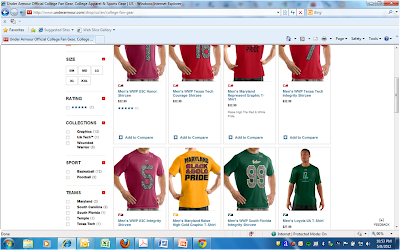 Now these t-shirts aren't my tastes and BC's doesn't have the fanbases of some UA schools, but there is no reason they couldn't produce a BC version. UA is selling Loyola, USF, Temple and Marquette and not selling a BC version of this t-shirt. Why? Have BC sales been so poor that we are no longer part of design rollouts?

Because most of the college licensing products are made in batches, a manufacturer is taking a risk any time they make a bunch. But there is also a chicken and an egg element to the sales. How are they going to sell any BC gear if they don't make BC gear?

I love my BC Under Armour fleece and my BC Under Armour sweatshirt. But that doesn't excuse UA from leaving BC off of their own website. One of the reasons we selected Under Armour as our partner was so we would be one of their few colleges instead of one of many Nike schools. UA needs to promote and include BC in all of their releases and BC needs to stay on top of the relationship so that we are not ignored.

Email ThisBlogThis!Share to TwitterShare to FacebookShare to Pinterest
Labels: BC marketing, Under Armour

UA's selection of BC gear on their website has been worthless since our relationship began. For the longest time I think there was only 1 t-shirt and a Kraft bowl hoody or something like that available.

UA is probably just following the ADs lead in treating BC fans like dirt.

...or, perhaps, we have some more logo and design changes coming (I continue my conspiracy... http://www.heightsandlows.com/2012/02/goodbye-slanting-numbers-theory.html )

I realize it is the school and not UA, but until they make something that remotely resembles this shirt (or one that says Boston College in block, not italicized, lettering), I'm glad they didn't roll out BC.

Simply put, the state of BC Athletics is not good, whether it is the product on the field or the product in the stores. The few nice things they have for sale are ridiculously expensive, and "a few nice things" doesn't describe what you can watch athletically (save Hockey). BC's marketing department is Gene's puppet, just as much as Spaziani is. Until there is a change at the top, acting surprised at failures is redundant, and the only way you'll make your feelings known is responding to those bcfund@bc.edu emails, or emailing the BOT (all alumni are in the alumni database)...

Knucklehead said...
This comment has been removed by the author.
9:49 AM

The bookstore used to have a grey Champion sweatshirt with "Boston College" in maroon straight blockletters. This was before the bookstore was sold out to whoever runs it now. The word "Boston" was above the word "College."

Can't UnderArmour make a T-shirt for a self respecting person over the age of 25. . . This is probably why they did not make a BC version of the shirt. The current students are not going to buy the shirts for fear of being called a posuer. Alumni are not going to wear this type of shirt because it makes them look like Bozo the Clown.

Boston College still has a relationship with Champion. We should work with them more.

All or most of my BC gear is Champion and I agree with Knuckle.

"This was before the bookstore was sold out to whoever runs it now."

The BC Bookstore should be run by BC and not outsourced - and we shouldn't outsource our sports promotional activities either, unless the new entity proves it's worth.

UA told me that those shirts are only for NCAA tourney teams.

For the record, I buy most of my BC gear from eBay these days. I like the vintage stuff and I'm comfortable enough bringing it to the dry cleaners the first go around for sanitization..

Hearing the recent controversy regarding Bill Romanowski and Chris Carter on ESPN, it got me thinking about the fact that I always forget like it or not Romanowski is a BC guy, even though he may not be a "BC guy." Saying that, do any older alums have any good Romo-BC stories you'd like to share?

What does U Conn. to Hockey East mean? Is this part of a larger deal of U Conn. and ND to the ACC? Was this all part of a grand strategy by ESPN to obtain ND's rights by emasculating the Big East and leaving ND with nowhere to go but the ACC. Thus depriving NBC of it's only college football asset. Or is the hockey affiliation an isolated step. 2. With a possible split and ultimate demise (football wise) of the Big East Blauds, Ryan and 1/2 of ESPN's staff will be on suicide watch. ND holds all the cards.

UConn has a hockey team? hahahaha

I accidentally ran into Romo in the Walsh cafeteria. The dude was big and scared the crap out of me.

BC stunk back in the late 80's, so I barely remember the games and I don't remember much of Romo on the field. I do remember watching Waddle (former Chicago Bear) and being impressed that he started as a freshman.

If you want to see real college gear and an awesome bookstore go to texas. It's like fan heaven. Nike rules athletic wear, and UA is trying too hard. Or in our case, not at all.

Romo played significant time at LB as a true freshman in 1984 and played in the Cotton Bowl. 10 wins 2 losses.

Bill also played on the team that beat Georgia in the Hall of Fame Bowl in 1986. 9 wins 3 losses

1987 marked the real beginning of Jack Bicknell's slide into obscurity.

I hoped that when BC signed with Under Armour that it would mean more aggressive ... underarmourhoodie.blogspot.com