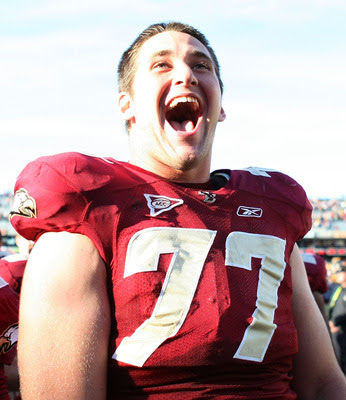 This is a series on the key players for the 2012 season. Big things are expected for some, while others will need to improve over their previous performances. If 2012 is a good year, it will be in part to the key players overachieving.

What he's been: A long-time starter and one of the leaders on offense. Cleary has played on both sides of the line and at both guard and tackle.  When he first arrived, Jags said that he could be the next Costanzo. Tall and lean (for a lineman) Cleary's been a consistent contributor like Costanzo (playing in 36 games and starting 26) yet he's never been the consistently great like Costanzo. How much of Cleary's occasional mistakes or setback are due to talent, coaching or the offense? I think it's been a bit of everything.

What he needs to be: Good isn't good enough anymore. Cleary takes on the big responsibility of left tackle this year. Rettig has been running for his life the past three years. If the offense is ever going to take off, they need to improve pass protection. That will start with Cleary. And in the ACC, he'll be facing some of the top defensive linemen in the country on a weekly basis. Cleary's always been good with speed guys on the edge. He'll also need to improve on run blocking. If Martin uses more stretches and zones like Logan, that will leave Cleary often sealing off edges on run plays.

Why I like his chances to shine: We've seen offensive lineman make huge leaps from season to season before. Part of it is maturing into their bodies and understanding the position. But a lot is coaching. I think Cleary has been underserved in that department. Even if Bollman is not some OL guru, I think Cleary playing in a more pass happy, up tempo offense will play to his strengths. I  think his leadership position and the coaching staff's confidence in him will make him shine at LT. I think he will live up to his potential and have multiple games where he dominates and plays mistake free football. Plus he still has the NFL on his horizon. If he can perform at an elite level, he can jump up from a late round afterthought to a high-round pick.

I think if Cleary stays healthy, he shoot up draft boards. If BC's offense breaks out of its doldrums he'll be named an all conference player.
Posted by ATL_eagle at 7/12/2012

Last year, Cleary got beat quite a few times by fast edge rushing DEs. They got a quick jump on him and he could not keep up. It was all over two seconds after the snap, except for the part where Rettig runs for his life!

I am not sure if it is a footwork issue or athleticism. I hope it is footwork and he get's better coaching.

And I do think that BC has greatly improved in OL coaching with Bollman and we will see a much improved OL.

"Rettig has been running for his life the past three years."

You must have been watching games from his senior year in high school? =)