No King at BC may be a good thing 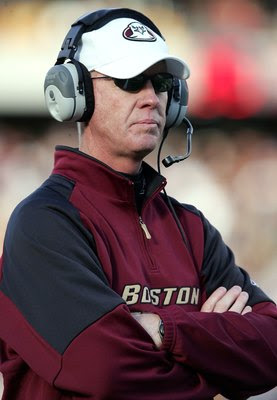 Nearly everything that needs to be said about Penn State and Joe Paterno has been said. But one point that Bruce Feldman made regarding College Football's King culture reminded me of how different BC is from most FBS schools. We don't and never have had a "King." I've often longed for that iconic winner that could serve as the face of the program, but maybe it is better that we don't. For whatever we miss by not having a "Woody" or a "JoePa" or "Bear" we also avoid the power struggles and corruption that often comes with an all-powerful Head Coach.

What does a King really provide anyway? Branding...a little nostalgia...someone to embrace. But it doesn't really win you football games or make you a better school. Florida State's losing in the final Bowden years proved that and Penn State has a permanent stain on their whole community because of their Kingdom.

BC's had some dynamic leaders, but none have ever stayed long enough to reach statue status. Our winningest coach and longest tenured even left and no one put up a fight to keep him. TOB could have been our icon. A little more fire and one or two more critical wins and we would have celebrated him like other schools have done with their biggest winners. But it wasn't to be and that's probably a good thing.

When I've profiled coaching candidates in the past, I've hoped that one would stay for a long time. That's changed. I don't want a guy who want to be bigger than the University. Things are better that way.
Posted by ATL_eagle at 7/13/2012

Would that we had TOB and 10 wins a year and 8 straight bowl victories. Critics of TOB are either blind or shills for the ESPN employee Gdf. Beamer's extended tenure has not been tarnished. 2. Give PSU credit. They have finally prosecuted the predator and his enablers. Unlike Syracuse where the Bernie Fine coverup is still on going. If the NCAA is going to act against PSU as it should then it must look to a worse situatiation in upstate NY.

I agree with the general sentiment that we don't really want a "king" at BC, but I don't think you can dismiss the positive impact Kings have had and continue to have on other programs. There are at least a dozen just about any college f'ball fan could name, and they're known as "Kings" because the built winning programs over extended periods of time -- "Woody", "JoPa", "Bear" and Bowden among them. Sure, they may hang on too long, succumb to delusions of divinity or whatever, but they created powerful programs, brands, and revenue generators for their schools long before they fell from grace.

Even in the short period of time that he was here, Frank Leahy was an icon. He left for "greener" pastures. I would say that TC was way up there and left a legacy. These two guys have done quite a bit of good for society. You visit the BC campus and the A.D. department and there is no remembrance of either. Maybe, BC doesn't deserve a king. Maybe, BC deserves the blandness into which she has fallen. "Ever to Excel" is a distant memory. It's all about Title IX and its inherent mediocrity.

We do have a King. His name is Gene DeFilippo.

NED - I'm not giving PSU any credit. If you've read former FBI Director Freeh's report, PSU executives including Paterno knew of child rape by Jerry Sandusky on several occasions and (1) did not ensure he was prosecuted, (2) continued to pay him salary and a 168K pension, (3) gave him VIP access to facilities, and (4) allowed him to continue working with children. PSU should be given the death penalty, pure and simple. JoPas statue should be torn down, and those complicit in the cover-up should be prosecuted.

JBQ: aren't all those other schools with "Kings" running their football programs also obligated to comply with Title IX? I don't see the specific relevance to BC's situation. Perhaps BC has simply decided that no coach will be bigger than the institution. York, who is legitimate coaching royalty, is exempt because college hockey will never be a big enough tail to wag the dog.

Penalize PSU anyway you want. What about Syracuse?

Knucklehead said...
This comment has been removed by the author.
12:11 PM

Boston College will never have a King. The athletic program is known for, at least over the last 30 years, not being willing to sell out its academic integrity for national praise. No coach who wants to be a King will ever stay long enough to be a King because: 1) We don't pay a Kings salary to football/basketball coaches, 2) the Admissions department will not lower its standards en mas to allow knuckleheads into the university, 3) the school has been reprimanded and learned from its own disasters ie gambling scandals in the 70's and late 1990's.

Despite this I agree that TOB was the closest thing Boston College could have had to a head coach will aspirations to the best football coach the University ever had who stayed for the rest of his career.

I also Disagree with ANY notion that long term coaches like Bowden, TOB, Pete Carroll or even the vomit enducing Bobby Knight being equated in any with what Paterno did. Paterno fronted to the media and people of PA as being an honorable champion in an attempt to make up for degenerate behavior he was enabling at "his" school. It is great that he helped build a library there. It would have better if he reported Sandusky to the FBI. Makes you wonder what dirt Sandusky had on Paterno. You know that there is a God when Paterno comes down with and dies of cancer within months of the story breaking. Only wish I could have seen his reaction to Freeh's report on Thursday.

Equating any other coaches behavior with Paterno is off-base because he took being a King to the ultimate LOW.

Knucklehead, I agree, but to ATL's point, all those you named would have liked to be on the pedestal pattern was -- and once you're there, maybe you do as Paterno did. Why put the institution in that position.

We have a King. His name is Jerry York. Gene knows better than to touch that hockey program.

Blist,
My point is that the coaches I mentioned are also considered "King's" but there is no comparision between their indiscretions and Joe Paterno/Sandusky. When an article is written about Joe Paterno/Sandusky there NO parallel to any other coach for what so ever.