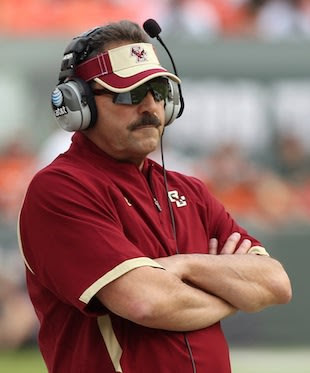 Given his public and private actions, I don't believe Gene DeFilippo had any intention of stepping down now.  I believe that he planned to serve as AD for years to come and conclude his reign by hand picking BC's next head football coach. That won't be happening now. BC's actions are clear signal that the school did not want Gene's fingerprints on the next hire. I think it also signals that Spaz's days are numbered.

The role of an Athletic Director is broad, but the biggest issue and focus will always and should always be football. Any new AD worth his or her while will insist on the power to fire or keep Spaz. Firing the already unpopular Spaz will be an easy first step for the new leader. A move like that signals change, wins over the unhappy donors and energizes the marketing of the program.

Even if Spaz pulls out a winning season, I think he's still a goner. His age, his lackluster recruiting and fan apathy are enough justification for some new blood. All the winning or losing will change is how BC packages his departure. If he wins, Spaz will "retire." If he loses, Spaz will be fired.
Posted by ATL_eagle at 8/17/2012

There's no way a 7-5 or 8-4 season will result in Spaz being fired. More realistic would be Spaz announcing he will retire at the conclusion of 2013....if we wins this season.

I would be happy with Unknown's scenario - especially if we don't have to pay Spaz for the 2014-2015 extension tendered by Gene DeNapoleon.

That was an unearned sweetheart deal if I ever saw one.

If Spaz earns his way to 2015, more power to him. That would mean BC getting back to strong contenders to the ACCCG - and also playing exciting, winning football.

But if he doesn't, I hope BC can contest the 2 year extension - why should the school have to pay such a thing?

The lawyers should be able to negotiate that down to nothing.

Atl is correct. Gdf was kicked out. It seems improbable he would be leaving on Sept. 30 rather than in June 2013 if it was his decision. I dissent on his tenure being positive. We lost TOB, Skinner and Inglese BC's winningest coaches in history and replaced them with what. The b-ball and football teams compiled a 20-53 record. This was an historic failure. All one can say is Deo Gratias for getting rid of Ryan, Blauds and Gdf in the same year. There is magic in the air. Is leaving to be a sports consultant the same as leaving for medical reasons. Given the choice of winning powerball or Gdf's exit give me the latter.

I just took a knee and said a prayer that Spaz is fired mid season.

Fire Spaz and steal O'Brien away from Penn State. His wife is a BC grad.

Just wish we were not locked into a contract with Spaz until 2015. The BC athletics dept is not flush with cash and we will have to payout Spaz and then try to attract a new coach with limited funds.

I would be curious to see just how bad ticket sales are this year and how much of a factor that played in Gene's decision.

I'm mixed on Gene overall but I think change is definitely warranted and BC needs some fresh faces and ideas.

Ding Dong! The Witch Is Dead!"

he filled the folks in Yawkey Center with terror, and with dread!
'Til one fine day from Out of the blue, the house of cards fell on his head. why, we'll never know.

he's gone, where, the goblins go,
below, below, below, yo-ho
Let's open up and sing.
And ring those bells out!

Sing the news out (laughing)
Ding Dong the merry-oh!
Sing it high, sing it low,
Let them know the wicked old witch is dead (err, retiring)!

Given that GDF is a pathetic disinformationist (new word!) about health issues (e.g, Rogers), I think we can safely assume that "treatable melanoma" is not why he is abruptly stepping down. I think almost everyone knows someone being treated for such things. Treatable melanoma is not a reason to retire.

So what forced him out in such an abrupt and unnatural way? Sept 30?? 30 days notice after 15ish years of service? My guess is some act of dishonesty finally caught up to 'OL GDF and the BOT had enough -- , maybe it was the Rogers mess??

My hope is that Gene's resignation/dismissal is not tied to some future conference realignment or some other major announcement that MAY be forthcoming.

It always appeared that Gene and Spaz were a package deal here. The fact that one is gone and the other remains especially in this order is illogical.

I am skeptical of the timing.

I sent this to my LSU buddy. I thought his comments were worth posting:

I am not sure there is a big name AD in general terms. I think in most cases the board of ___ and/or President guide the actions of the AD. That all being on how the university is run in general. Notre Dame gives the feeling their AD had huge role in things which may be true. they suck so bad and he is so powerful that something does not add up. If is so hard to have such incredible althletes perform so poorly over such a long period of time. ND and Texas play as soft a football as I have ever seen. Both are loaded all the time yet play like girls. He is a big man in th BCS and NCAA but cannot hire a coach for shit. I like an AD that know athletics and how to hire and fire coaches myself. His superiors will lay out budget and overall policies like conference allignment etc. I think that is even more so at a private school that really has to watch their nickles and dimes. If nothing else the ACC move will prove him wise beyond his personality.