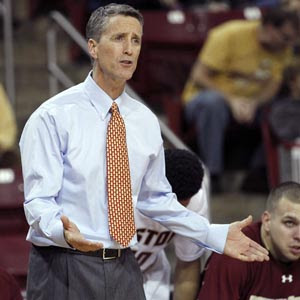 Steve Donahue knew he created a very difficult schedule. Like many of his moves, he studied the data and made a decision that went against conventional wisdom. We wouldn't fill up on out of conference cupcakes. Instead BC would play one of the toughest schedules in America and would be rewarded when the Selection Committee gets together to in March. Like some of Donahue's other unconventional decisions that are statistically supported (valuing transition defense over offensive rebounding, valuing a players who can execute a perimeter shooting based offense over raw athleticism) this sort of move takes a brave visionary to embrace and execute. If it works, Donahue looks really smart. Right now, he and the team look lost.

I am not ready to give up on the season. College Basketball can be a tricky sport, especially when you play a high risk, high reward system. BC could easily get hot for a few weeks and shoot everyone out of the building. In prior rears Donahue also did a decent job of adjusting rotations and strategies after early shortcomings were exposed. Magarity looked decent too in limited action, so maybe some of our size and rebounding issues will improve as he gets more time. And as much as the schedule seems foolish now, Donahue is right. If BC has a decent ACC record and a good RPI, we will make the tournament. But to recover and start winning means Donahue and his team figure out all their issues quickly. The schedule is unforgiving.

I am not off the Donahue bandwagon yet. There have been too many glimpses of what we could be to lose faith this early. But I am not someone who thinks he deserves a fifth year if BC struggles with our schedule. I appreciate unconventional approaches but you cannot ignore reality. If a coach cannot translate stats to success on the court, you need to let someone else take over the program. The Miami Heat are one of the least conventional teams in basketball with regard to player positioning, lineup usage and traditional positions and they have won two straight championships. But the Heat won when they married an unconventional approach with the best talent. Donahue has to adjust his approaches to the talent he has brought to BC.

I hope all this handwringing and fire the coach talk seems premature in March. As I've said when Spaz struggled, these seasons are much easier to watch and write about when they are fun. BC fans want Donahue to succeed. This start is disconcerting, but let's see if the guy can paint himself out of the corner.

Really? There's "fire the coach" talk two games in to a thirty-game season?

No, there's "fire the coach" talk since our wonderful coach has won 46 of his first 100 games, has recruited very little ACC caliber talent, and has his most mature team in 3 years. This is his make or break year, no matter how you want to spin it.

Do we think that BB has set goals that must be attained this year? If so what might they be? Does he do this with every sport? Should he? Or just the sports that people blog about? Or bring in the bucks? Should the goals include grad rates?

ATL - what's Donahue's current contract look like? I remember reading that it was a six year deal and we are beginning year four. To that end I think that BB will be gun shy about bringing someone new in as long as Donahue wins 16 games.

Im sure the losses will come back to haunt us and our resume, but they didn't play bad against Providence. The 2nd half of UMass was a head scratcher but they should be able to correct things and Hanlan will be MUCH better than he was in that game.

They need an inside presence like Jared Dudley. They have none. They just appear to run a weave on the outside looking for a 3.

Where is Hanlan? The ball should go through him as the point guard. Instead Rahon is handling and trying to be Steve Nash.

I have said this for two years here. Ryan Anderson needs to go to basket looking to score and not looking for the ref to give him a foul call. Frustrating season so far.

16 wins is not going to happen with the RPI schedule in place. What is out RPI now anyway? What would it be if we had played Harvard and Holy Cross instead?

Drag sucks to by the way.

You don't paint yourself out of a corner.
Someone paints you into a corner.

It's never good when Odio is in your starting lineup. It's pretty much 4 on 5 when BC is on offense. Odio could be worse than Nate Doornekamp and Johnny Oates which is really really sad.

The idiom is does involved selfinflicted painting (http://idioms.thefreedictionary.com/paint+into+a+corner). And I used purposely knowing "painting out" is not likely.

it is an abject failure to have the same problem for four years running. we have no size, no rebounding, and no rim protection, and we haven't since Donahue took over. yet the staff keeps recruiting guards and wing men.

we have one scholarship for next year. who did we spend the summer recruiting? dominique uhl, a 6'7, 185 pound small forward. when he chose IOWA over BC, we wound up taking his hs teammate, a point guard. its just baffling how the staff refuses to address the fact that we have no size, and yet Donahue acts miffed by the fact that we can't rebound.

i'm not ready to give up on the season because i've already suffered through the "rebuild" of the last 2 seasons so whats another. but i have given up on the coach and this staff - its a bunch of ivy leaguers and Hobart (seriously, Hobart, look it up) alum who have never smelled success at the Major Conference level. yes, there will be nights when the 3's are falling and we are win some games, but i don't see how this style can be a recipe for long term success. you can't have a team of guards and tweeners, be the worst rebounding team in the conference 4 years running, have no rim protection whatsoever, and somehow expect to be perenially above average.

also, i have to chuckle at the outlook of the season. Bryce Cotton and Chaz Williams are nice players. Shabazz Napier on UCONN is a much more talented player than they are, and he's coming up. at Purdue, at USC, on a neutral court against VCU - the schedule is only going to get tougher, folks. i know we were right there against PC and had a bad second half against UMASS, but it will only get harder, and guess what, we have absolutely zero depth (yet again) and will have more injuries to deal with. i have a hard time seeing this team finishing the team over 500.

Completely agree with miz. This philosophy is on life support. Are these guys ACC caliber? Don't need to beat Coach K but Cornell ain't gonna work. Donahue has to be aware of the problem, right? I mean, we talk about giving Daz four years. Simple recruiting cycle. So far, so good. BC has fewer recruiting disadvantages in basketball. In fact, I think we should be in the tourney every year. We don't need to graduate 92 pct of these guys. And you're actually better if you don't do the one and done thing.

Miz, I'm with you on this. Blog for the rest of us.

I don't know what "conventional wisdom" ATL is talking about. If you schedule cupcakes and lose to a team with a 270 rpi, it crushes your chances to dance. Plenty of teams schedule difficult matchups because the tournament committee rewards tough OOC games. Sure, coaches sprinkle some gimme games in there, and BC has done that this year. And some mid-majors have difficulty getting top 25 teams to play them. But BC bucked no convention this year.

The ACC bottom feeders used to be decent teams. Now they're downright awful and drag down the conference RPI. This schedule allows BC plenty of time to recover, and allows it the chance to bag many 'a scalp. They need to turn it around and start winning.

We are BC. We need to graduate 100%. It may feed some egos to win games but that is not the only point. Winning and high respect for the school philosophy are not mutually exclusive. Just look at all the top tier academic places that have winning teams.

Hobart? How about Butler?

Maybe Daz could do some hoops recruiting, too?

A person does not paint themselves OUT of a corner.