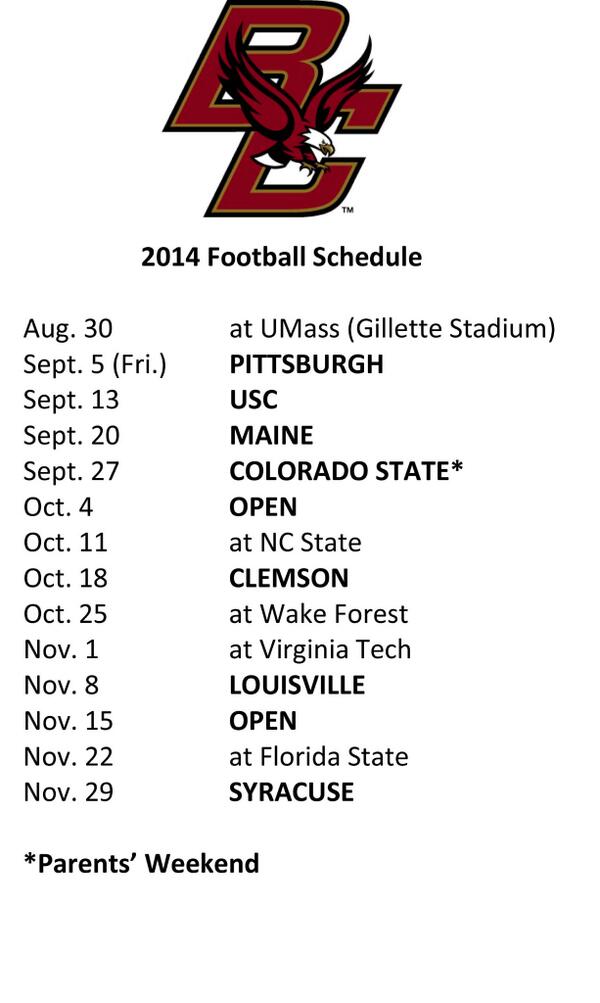 We've known who BC was going to play for some time. But today BC and the ACC released the official schedule with dates. Here are my initial reactions:

Great schedule. They have a shot at 8 or 9 wins. Certain defeats at FSU and VT. All others ate winnable. With Wipple as UMass' coach BC will be a four touchdown underdog. Just ask Blauds.

@NEDof: I don't see it that way. The winnable games in the ACC are on the road. They are in big trouble in a rebuilding year. On paper, they will be 2-12 with wins over UMass and Maine. Without Murphy, things would be even worse. There is no running back, no go to wide receiver, no defensive end, no nose tackle, no kicker-punter, and obviously no d-backs. Addazio has a habit as seen at Temple to run behind a big running back. Murphy better buy some liability insurance.

I don't share your optimism at all Ned (to be expected). At best, I can see BC winning 6 games, but that would require actually winning games on the road against equal competition.

Ned- how is VT a sure loss? We beat them last year and they've been on the decline and beatable for a few years now. I'd say Clemson is a far tougher game

Other than Umass and Maine, these games could go either way. This season will be a challenge but I'm cautiously optimistic. A 6 or 7 win season would be a realistic target

Ned- how is VT a sure loss? We beat them last year and they've been on the decline and beatable for a few years now. I'd say Clemson is a far tougher game

Other than Umass and Maine, these games could go either way. This season will be a challenge but I'm cautiously optimistic. A 6 or 7 win season would be a realistic target

5-7 is realistic. Obviously, I'm hoping for the higher end. 8-9 is only possible if BC catches a couple breaks and remains injury free. Not a likely scenario.

please, no predictions until August. 7 wins for this past season would have been scoffed at a year ago. lets just see how spring ball goes, how the freshman look, and go from there.

i'm still miffed about the Army game at Yankee Stadium. why did we cancel that? would've been a fantastic time for the BC NYC alum.

What sayeth the sum of the chances [sum of percent chance of each win],

We win 7 games with a little luck

We cancelled that because BC should have 7 home games per year and playing football in a baseball stadium is idiotic.

If BC plays Army in NY it should be at Michie, and I hope Bates renews that series.

Army cancelled it not BC

I think your percentages are quite a bit off mod, specifically Pitt, CSU, VT, Louisville, and FSU. We have 0% chance of beating FSU on the road. You also gave BC the same odds of beating Louisville and VT (on the road) as you did with Wake. That's just crazy. VT would be more of a .3 as well as Louisville. CSU I'd drop to .6 and Pitt I'd drop to .5.

BBill fair points. I did not realize the Colorado was actually a good team. Thought it was another NMSU (which we almost lost!)

I like that we play 5 games to start the season w/o having to go on the road. With so many new guys to break in it'll be a big plus to start out in friendly confines before they get thrown to the wolves!

I love Michie, would love to see us go back there.

@Heydad, why would Army cancel and then reschedule w UConn?

BC already had the game @ Gillette and wanted 7 home games

Claver2010
If you look at Army's schedule they don't play Uconn. The game at Gillette was scheduled after Army bailed on Yankee stadium.

Regardless, I'd rather play Army at Michie over Yankee Stadium.

Michie is the best place to play Army. I hope we get them on the schedule again. I've been there everytime we played them there great trip.