2014 Preview Questions: How good is the Offensive Line? 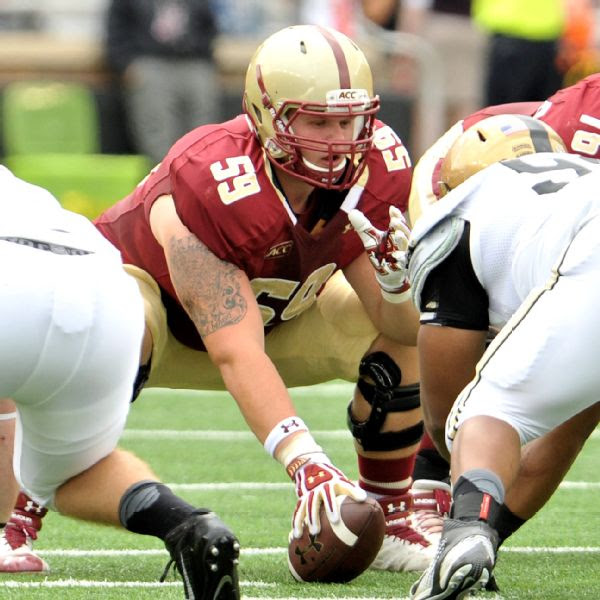 Given BC's history with OLine play, it is surprising that it took until last year for an offensive coach to say "forget skill players, maybe we should just put out eight offensive lineman." The jumbo packages combined with the spread proved to be a good wrinkle. It played to our strengths and depth. I am sure this year we will see new wrinkles, but I don't think teams will be as surprised or that we have the same depth to pull it off. The big question is how good can this Oline be? Their success as a unit will impact BC's season more than any other.

During the decline under Spaz, the most obvious weakness was offensive line play. Mistakes, confusion and sloppy technique were evident. One of the reasons for last season's turn around was simply better position coaching. Which shouldn't have been a surprise since Addazio was a former OLine coach. You assumed that he would put an emphasis on the unit and find a good position coach (which he did in Justin Frye). In Year 2 -- with another year of good coaching -- things should be better. But it is not always that simple.

The middle of the line returns. Vardaro, Gallik and Williams should all probably be in the same position as last year. But those three were also the most inconsistent of our starters last season. Vardaro and Gallik would play really well some games and struggle in others. With Gallik receiving a series of preseason accolades, I assume the coaches are expecting a big season season from him.

But who replaces the Tackles? It is assumed that it will be another Florida transfer Ian Silberman and Seth Betancourt. But the coaches could easily move Vardaro and Williams wide and use Silberman and Betancourt on the interior. It really depends on what Frye thinks is most important, position familiarity or putting you best talent at Tackle.

I also don't know if and how often we will go big. Opponents have had a whole offseason to prepare. Without the surprise will the big packages be as effective? Also, do we have the depth? Are the guys on the bench able to come in and play? Are we better off with multiple Tight Ends? Unlike our questions at WR, I have more confidence that the Oline will come together. The talent and coaching is too good for it not to come together. And if it doesn't come together...we're screwed.
Posted by ATL_eagle at 6/29/2014

The o-line should be solid. Silberman and Betancourt were the starters in the spring game. Daz has promised an effective line and he'll deliver. Concerns over next years line are valid. BC will have to replace all five starters in 2015. The group will be very young. This year they have a veteran group which should produce. 2. Expect much of the passing game to be to the tight ends, fullback and running backs. They only have to pass for 150 yards a contest to equal last years output. If Murphy is healthy that goal is easily obtainable. 3. In the BCS bowls last year the Big 10 won one game. The Big 12 won one game. The American won one game and the ACC won two games. The all powerful SEC lost it's two games. So much for dominance and superiority. Happy July 4th.

As much as it pains me to say it, the SEC is the best athletic conference in the country over the three major sports. Since 2000, it has five baseball titles and six runners-up. The ACC has none and three runners-up. In football, seven of the last eight and one runner-up. And more draft picks than anyone. In basketball, the ACC has eight since 1990, the afterthought sport in the SEC has six. Not bad.

If BC played in the SEC it would win one conference game. Happy fourth.

I think we'll see that Frank Taylor and Jim Cashman will step up and be ready if needed.

I'm looking forward to my Finance Major, Jim Cashman having a good year. He was the Jersey Player of the Year two years ago - no small accomplishment.

Hopefully we can redshirt John Baker, James Hendren and Sam Schmal for that tough OL we will need going forward.

Although I didn't see the 2nd and 3rd games, it was cool that schools like Vanderbilt and Virginia were in the CWS final.

Virginia was very close to being crowned.

SEC Football is close to being a professional deal the way they bring in players on one year renewables, and let players go every year. It's all pretty quiet.

But you can't recruit 30 players every year without playing checkers with scholarships and cutting players loose who don't cut the mustard, or who get injured. It's a tough business in the SEC.

When coaches get paid $6 million, they are not going to take chances on renewing scholarships on players on the margin.

If there is 1 position I'm not concerned about on an addazio coached team, it's the oline

I don't think familiarity w/ the blocking scheme will matter. I was @ the NC State game last year and everyone in the stadium knew where the play was going, but that made no difference, more often than not we ripped off good gains. Most college teams today are designed to stop the spread, so personnel wise they're aren't best suited to deal w/ our power game. I've posted before that the Achilles heal of BC football has always been lack of speed. I think this is one of the ways Daz has decided to deal w/ that. This makes sense to me, but w/ an offense that looks to control the clock, I'm not sold on Brown's gambling defense. We give up too many big plays and we don't have the offense to make up for these lapses in a hurry. Maybe w/ better defensive personnel this won't continue to be such a glaring weakness.