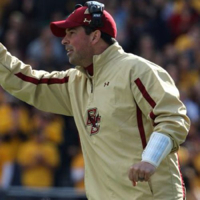 The Eagles hired Ryan Day as their new QB coach where he will be reunited with Chip Kelly. This is a great move for Day and a critical turning point for Addazio.

Although Day spent most of his career at BC, he's been considered a rising star by many outside of Boston. In fact, I would say he was probably under appreciated by casual BC fans. Just look at most of the comments during his stint as OC. I liked Day from the start and appreciated his role in the Jags days as well as his contributions to the offense the past two years. He got a raw deal under Spaz and then hooked up with Addazio at Temple. Having Day as part of Daz's transition also helped the new regime since Day was so familiar with much of the roster. Our offense under Day was a good blend of Addazio's philosophy as well as Kelly's innovations all while adapting to unique rosters.

The timing on these things is never good, but now Addazio has to close out his recruiting class without one of his best recruiters and find a new play caller. The most obvious internal candidate is WR Coach Todd Fitch. He has playing calling experience and could run the same offense. But Addazio doesn't necessarily have to settle on an internal hire. There are plenty of guys who would want to come to BC, especially given the association with an Urban Meyer power-run offense. Being an offensive guy, Addazio will always have influence on the schemes too. I expect we will still be run heavy with spread principles.

Whenever Addazio leaves BC, Ryan Day will be a candidate to replace him. This move to Philly only makes his candidacy better. It gives him NFL experience and some distance from BC. Now if Addazio struggles, Day won't be associated with those struggles. If Addazio succeeds and moves on, Day can also position himself as the candidate who can keep the best parts of Daz plus bring his unique perspective.

We can only look forward now and hope our HC finds a winner who is a good fit for his staff and BC.

Go BC - get this search done right.

sad to see Day go as he was arguably our best recruiter and for all the griping about the offense it was pretty consistent. we seemed to play to our strengths. best of luck to him and as you mentioned bill, maybe he returns sometime down the road.

i hope Addazio goes back into the Meyer coaching tree for a hire. go with Hevesy down at Miss St or someone at Ohio State now. we need a good recruiter and someone who has done it before, but not a re-tread.

Congrats, Ryan Day! I could not be happier for you and us. Win-Win.

Day had his good moments (USC), but he really was not a good coordinator. he just wasn't. middle-schmiddle.

not a matter of opinion. just look at the facts: #83 in total offense this year, #93 last year. Day owns those numbers. Are those good results? no, those are bad results. BC deserves better.

his offenses totally lacked balance, and any sense of surprise and spontaneity . maybe Dazz handcuffed him -- who knows.

i am glad he is moving onward and upward. This is good news for Giant fans too.

Ryan Day as a front runner successor to Dazz? a mini Al Golden? OMG! NOT.

mod34B - for the last time, you can only coach the players on your team. here are some other facts: single season all-time ACC rushing record. single season all-time QB rushing record. a good coach adapts to his players and puts them in a position to succeed. Day did that. i wish him the best of luck and hope we get a guy who was better than Day was. filling that void may be tougher than some may think.

oh Miz, ever the pathetic apologist.

rushing records? so what. Day failed to use the entire play book. That's not good. just look at the bottom line. our offense was worse the 80, 90 other teams.

Why put lipstick on this pig?

You can go the other route and look at BC's passing game before Day came (not bad), and look at it after Day came (dreadful) even though he had virtually the same offensive players.

Maybe Dazz pushed Day out? Really, the more you look at the result, You gotta think the results stink

I won't say Day was a bad OC. He wasn't. He wasn't great either. He was serviceable and did the best with what he had, making the team competitive in two years it had no business being good for 7-wins. The job he did with Andre and Tyler were impressive, making them impact players in just one year.

I'm sure Daz did not push Day out. Day saw the opportunity to coach in the NFL and took it. Hopefully he will learn more from Chip Kelly and bring that with him if he ever returns to BC.

Most importantly this is a great opportunity for Daz, and Bates to a lesser extent (I'm sure Daz will have more say in who gets hired). I hope they don't hire Fitch and don't go raiding the MAC again. This is an opportunity to make a hire similar to bringing Scott Spinelli from Maryland.

It was time to go up the ladder with a new OC. The same holds true for the DC. Everyone loves Addazio for his enthusiasm. Even General Patton had to have competent personnel in key position. Addazio is no exception. These are positive moves to upgrade the program. Good for him. Let's see who comes in. Without a doubt, the defense should be upgraded. Only high school teams blitz on every play.

We need to hire someone who can recruit and develop his recruits. Good players make the play caller look good.

Day is about the best play caller we have EVER had. If Murphy caught the pass at the end of the FSU game it would have been one of the top 5 plays in BC football history(incredibly good call):

Along time ago I heard Dan Devine say that statistics are for losers, and I never forgot it. The only thing that mattered w/ Day was that two years in a row he was a big part of our team winning 7 games when none of us thought that was possible. Where did Ga Tech rank in the national passing stats? Pretty close to us, yet they are Orange Bowl Champs. Good Luck to Day, I for one will miss him.

I left the prior comment. Staying w/ my friend Chris and it mistakenly went in under him.