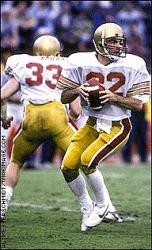 It looks like Doug Flutie might finally retire. Flutie remains Boston College’s most famous football player and arguably the school’s most famous alum. His lasting NFL moment might his dropkick, but he strung together a long and mostly successful NFL career. He also retires as the last USFL player and as the best player in the history of the CFL. He is a Heisman Trophy winner and part of one of the most famous plays in the history of sports. All of these great and varied accomplishments cast a shadow over Doug Flutie’s time at BC. The Hail Mary was only part of his college career. In fact, Flutie was one of the best college quarterbacks of all-time.

In today’s pass happy game, extended season and bowl games counting towards stats, Flutie’s numbers don’t stand out. However, when he graduated he was the NCAA all-time passing leader and total offense leader. And it wasn’t a dink and dunk offense. It wasn’t a spread. It wasn’t a run and shoot. Flutie, and a young OC named Tom Coughlin, ran what was essentially a pro-style offense and used a variety of formations, threw to backs, Tight Ends, threw long patterns, short timing routes…they did it all. He ushered in the modern era. He led BC to a 30-11-1 record and not to slight his teammates, but this wasn’t an all-star team.

Flutie is still BC’s leader in passing, total offense, passing yards in a season, TDs in a game, Yards in a Game, Touchdowns in a season. Flutie had one 500 yard game and three 400 yard games. He rushed for more than 700 yards. He won the Maxwell award, the AP award, the UPI award, and numerous other player of the year awards. He was named to Sports Illustrated’s All-Century College Football Team.

This little write up doesn’t do justice to all that Doug Flutie has accomplished on and off the field. But hopefully it will just serve as another reminder that there was more to him than just Miami.