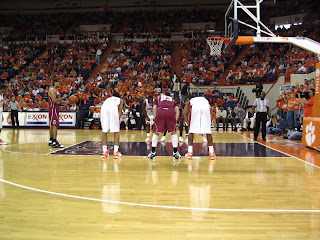 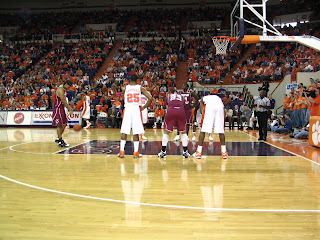 I made the trip to Clemson today. I got these two shots, but couldn't get many more quality ones before the battery died. I either had a ref or cheerleader in my face the whole time. I promise better pics for the Georgia Tech game. The Clemson folks were great, as always. It was a good trip except for one thing...the actual game.

First let me say this, even with Williams we lose this game. Clemson is the type of team that has always giving Al's team's trouble. They hit a bunch of 3s and they are physical and quick for 40 minutes.

In the post game Al said the team played well for 18 minutes and then it all started falling apart. Marshall hit a three to get the score to 33-36. In the next five points were Clemson's. At halftime I believed that the team had a chance. We know how that went. Clemson overpowered BC in the second half. When Rice only made two of his four fouls after the technical and foul, the game was over.

Rice played hard but reckless. He didn't get the offense set up enough, didn't get the ball to Dudley in the post and had too many non-press related turnovers. Marshall was off. Blair struggled. Haynes continues to be an issue. There were eight non-press turnovers in the second half in total. The only solid performers were Dudley and Spears.

In the post game Dudley rightfully said, "you're not going to win every game in this league." It's true, especially when the other team hits open 3s and we turn the ball over 20 times.

Where do we go from here?
-- Rice is going to have to play better. He needs to play within himself and get the offense set.
-- Dudley needs more touches in the post. He did not get to the line nearly enough today.
-- Blair and Oates need to contribute something. Anything really. Both just take up space. No rebounding. No defense. No offense. They cannot replicate Williams, but Oates can play better than he has played lately.
-- Marshall driving. He got cute today with his outside shots. Not where we need him.

I still have faith. The team came off as testy up close. Now is not the time to start pointing fingers. Better play and better team work is the only way BC will get into the NCAAs.
Posted by ATL_eagle at 1/20/2007

-Eagle, alright maybe we did great against the 2-2-1 press, with some really good open bottom of the key jumpers, but there is no excuse when you allow a team to hit open 3 point shots. You get a hand in the face of the shoooters on the team. Absolutley no excuse.
-I was happy about the low turnovers, but 9-17 from the 3 point arc is inexcusable

Rumors seem to be swirling that Skinner is out after this year. That seems unlikely and illogical, but I'm wondering if you've heard anything?

The Skinner situation is a conundrum. He is an excellent recruiter and developer of talent but he is an awful game coach. He never makes any in-game or halftime adjustments and he is way too stubborn about his starting lineup. He needs to be much more flexible and allow those people who are currently playing decently to start and bench those who aren't (i.e. Oates). He has been lauded in past years for having the same starting lineup game after game for the entire season. Some announcers have called it stability while I like to think of it as pure stupidity. There is no way people like Doornekamp (although he got luck and hit a basket or two a game) and Oates should start every game of the year because they are useless, esp. Oates. Also, coming out flat to start the game or the second half and not being able to close any teams out have plagued BC in the past but it is quite noticeable this year. Keeping Skinner allows BC to maintain its recruiting ability and talen development while sacrificing coaching ability. Letting Skinner go puts recruiting and development at risk while securing better coaching ability. Is the risk worth the reward?

Skinner is staying. I think the Williams thing looks bad, but Skins still has a lot of goodwill built up with the right people. Plus next year's class is supposed to be very good.